As a young punk in North Jersey, I used to listen to this one comp over and over and over. It featured a bunch of bands I loved that you’ve never heard of if you didn’t exist in that place at that time. Each band had two songs featured on the comp and one of them was a ska/punk band named Jiker. They had a song on the comp called “Pirate Radio”, of which the only lyrics I remember are “pirate radio, pirate radio, pirate radio, argh argh argh”. And while the lyrics are about ACTUAL pirates, the song still comes to mind whenever I hear the phrase “Pirate Radio.”

The song is a generic and goofy punk song, but the film of the same name is something special. A cast of brilliant character actors is headlined by the late Philip Seymour Hoffman and features Nick Frost, Bill Nighy, Rhys Darby, Rhys Ifans, and Chris O’Dowd. The evil government fighting against the pirate rockers even features Kenneth Branagh. Pirate Radio is a fantastic feel good comedy filled with love, debauchery, and rock’n’roll!

Hoffman is the only American on the British ship that broadcasts the pirate radio station “Radio Rock” and he serves as the leader of the crew. His moniker as “The Count of Cool” is appropriate as he rocks hard, defends his friends, and takes no shit. Though, he does respect his boss enough to resist complete outward rock’n’roll defiance because apparently some things are too far, even for a pirate radio station… or are they?

This crew’s group dynamic changes when a former king of cool who left to be on the American airwaves returns to the ship (Gavin, played by Rhys Ifans… you know… that kicker guy from The Replacements). His coolness leads a groupie to marry another DJ on the ship in order to be able to sleep with him regularly. This is found out very quickly, when she confesses her plan and is kicked off the boat. The two kings of cool have a battle of “chicken” over the whole ordeal and the whole ship ends up bonding closer after the two both injure themselves in the process of jumping into the water off of the highest point on the ship.

The cast members truly have magical chemistry and, despite mixed reviews by the critics, the film is very compelling. Hoffman is, perhaps, the most compelling character of all… willing to “go down with the ship” just to keep the rock going. The airwaves won’t go dead until he does, at least that’s how he sees it. Much like his character of Lester Bangs in Almost Famous, Hoffman plays the role of a rock mentor with perfect taste in music and a penchant for well placed curse words. I find that an actor who chooses roles in movies with stellar soundtracks becomes a favorite actor of mine very quickly. Hoffman, along with the likes of John Cusack, has cemented himself into my pantheon of actors, due in large part to his characters’ love of rock and roll. And, if you too love rock and roll… this film is NOT for you… 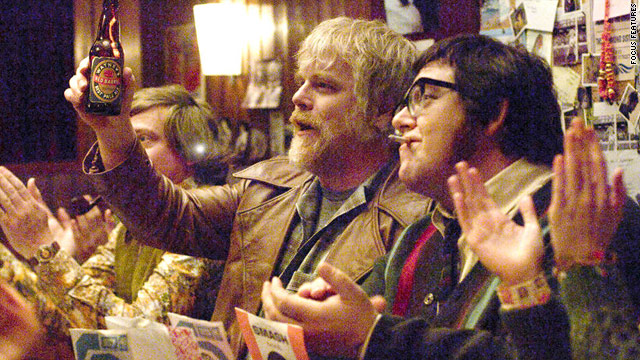