The following review was originally written for thepaintedman.com.

I have all the room in my head for you as long as you keep producing albums as solid, fun, and fresh as Artificial Heart.

His eighth studio album, Artificial Heart represents the end of a long break from recording new material and also represents something new from JoCo. Highly polished, it comes across clearly that this album was recorded in a music studio and produced by someone other than Coulton himself. Artificial Heart is JoCo’s most highly polished and pop oriented album to date, but does not sacrifice the silliness that long time friends have come to expect.

When listening to high energy pop rock tunes like opening track “Sticking it to Myself” and namesake “Artificial Heart” you can hear the influence of producer of John Flansburgh of They Might Be Giants, a band Coulton recently toured with. That influence is clear throughout, and at first the differences between this album and previouosJoCo efforts were a bit off putting. The longer I listen to it, the more I enjoy every track on the album. This is quickly becoming my favorite JoCo album to date. 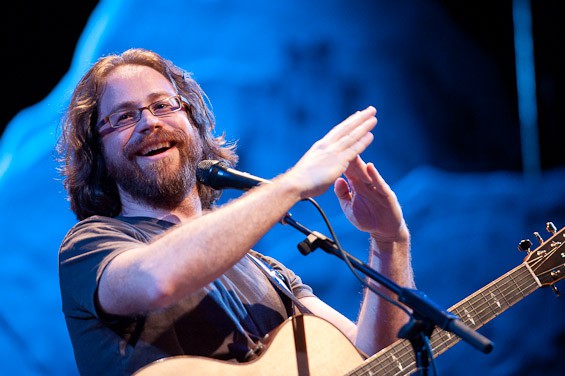 Track 3 “Nemesis” is an example of traditional JoCo style: a sweet love song with a silly twist. The silliness continues with songs like “Jes Suis Rick Springfield” entirely in French, and “the Stache”, a song whose name says it all. Other tracks like “Good Morning Tucson” reveal Coulton’s familiar and talented storytelling style. Artificial Heart also gives us what is maybe JoCo’s most moving song, “Today With Your Wife”, a beautifully mesmerizing and subtle look at grieving over death. While much about this album may be a departure, long time JoCo fans will see what the’ve come to know and love shine throughout.

I was at first skeptical about the inclusion of the Portal series songs “Still Alive” and “Want You Gone” as I felt cheated out of two new tracks. However, how could anyone complain about Sara Quin from Tegan and Sara singing as GLaDOS? Sara and Jonathan’s harmonies match the tone of the song perfectly, and this is one of the better of the many adaptations of this song around. “Want You Gone” is certainly one of the more clever songs JoCo’s written, and while this version is not different enough to think of it as new material, its inclusion seems worth it.

Listening to Artificial Heart I can’t help but wonder if this new generation of nerd rock has grown up. This album is clearly designed to reach new audiences and reaches new heights of qualities for this seasoned singer songwriter. At the same time Artificial Heart promises to continue exciting crowds of gamers at Penny Arcade Expos and conventions around the world. Maybe due to JoCo’s max level awesome we will continue to see our numbers swell.