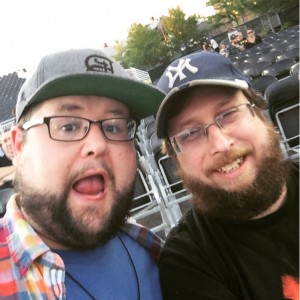 Tony loves the Yankees, the Lakers, and a good cheeseburger. Tony jams out to the Eagles, the Beatles, and Chicago. Tony’s your average top-40, All-American guy.

Tony also lives right outside Bethlehem, Pennsylvania and had never been to Musikfest. Or ever listened to the Flaming Lips. Or probably had any interest in either of those two things. Well, it just so happened that those Fearless Freaks from Oklahoma City were coming to open the festivities as the headlining act on Friday, August 7th 2015, and I wondered: what would happen if I took a guy like Tony to experience the psychedelic, mind-altering, confetti-exploding noisefest that is a Flaming Lips concert? What kind of reception will they have to his top-40 tastes, and is it analogous to Musikfest as a whole? Can the Flaming Lips perform at the same festival as Culture Club, Snoop Dogg, Darius Rucker?

I tried my best to explain to Tony what he might experience once the freaks had assembled in their seats, the smoke and confetti guns put in place, and all of the giant mushroom costumes fully functional. I told him it would be odd, some strange mix of Pink Floyd, outer space, and… well, noise, really. But I don’t think anything could have prepared him for what would happen when Wayne Coyne, Steve Drozd, Michael Ivins, and Derek Brown hit the stage and unleashed the massive multi-colored balloons. 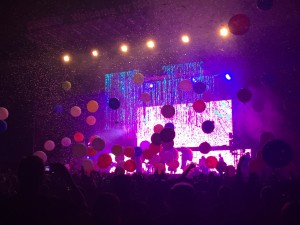 If you’ve never seen the Flaming Lips live, a good description might be “pure joy.” Flaming Lips concerts lift you up to a place where a bunch of people who don’t know each other can play, bounce balls around, jump, dance, and sing together. It’s less concert and more party, but goes to a shockingly deep, existential consideration of the meaning and purpose of life at the same time.

I’m not sure how it’s possible, but somehow at Musikfest the Lips got even Lipsier. Every song had costume changes, new props, and strange creatures coming out on stage. With each number you never knew what was about to happen or emerge onto the stage. The show didn’t start with Wayne’s trademarked giant hamster ball, rolling him around the crowd. Instead the band walked out on stage, like any other band on any other stage, and greeted the crowd. That all changed the moment they ripped into “Abandoned Hospital Ship,” a classic from their 1995 album Clouds Taste Metallic, and a song I didn’t know if I’d ever hear live in my life.

They then kicked things into high gear with the popular “Fight Test” from the Yoshimi album. During these songs the crowd really began to open up, dancing around, chasing giant balloons to toss back into the crowd. But the audience really lost it in the third song of the night when the Lips broke into their biggest radio hit and only song to touch the Billboard charts, “She Don’t Use Jelly.” Simultaneously they brought onto stage a particularly popular balloon that they let loose into the crowd yelling “tear that thing up!” 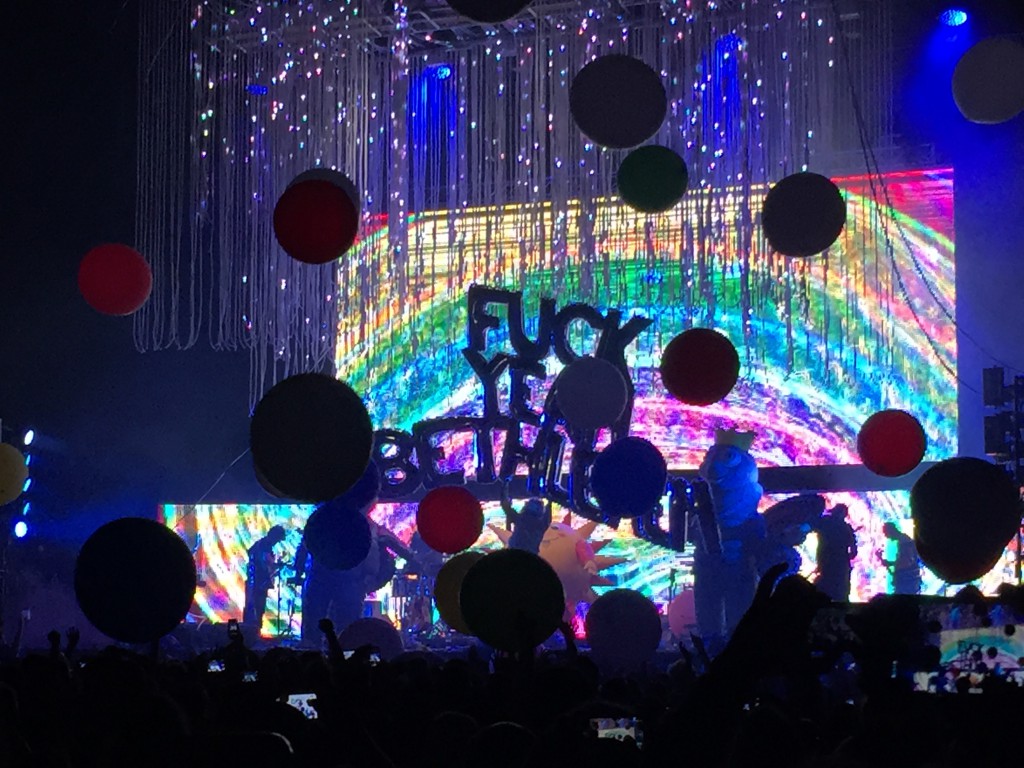 There were giant balloons filled with confetti to pop and explode onto the crowd, lazer lights, giant costumes, and finally Wayne rolled out onto the crowd to belt out “Vein of Stars:. But more than just the added theatrics, here is what I think made this Flaming Lips show even more intensely what they’ve been already doing for years. This Flaming Lips concert was overtly intended by the band to be a life changing experience with the power to help someone become a better human being. It isn’t that the concert has some magic power. Instead, the joy experienced by gathering with fellow smiling people to freak out together and get weird might just allow someone to reach deep within and lift themselves into a better state of being.

The show followed the existential journey of humanity, from the explosion of new life, the energy and enthusiasm of youth (“Abandoned Hospital Ship”, “Fight Test”, “She Don’t Use Jelly”, “Pompeii AM Gotterdammerung”, “Yoshimi Battles the Pink Robots”, “Yeah Yeah Yeah”), to the questions of meaning that come with maturity (“Feeling Yourself Disintegrate”, “Vein of Stars”, “W.A.N.D.”), and to the victory of love and inevitability of death (“A Spoonful Weighed a Ton”, “Do You Realize?”).

You might be thinking that I am reading far too much into this. It’s just a concert. But before playing the last song, Wayne monologued to the audience about how he experiences their shows. He said that the Lips had the best fans in the world, and he knows that everyone says that, but if anyone says that and they’re not the Flaming Lips, they’re wrong. But the reason the Flaming Lips have the best fans in the world? Wayne said that many of us gathered that cool, summer night in Bethlehem carrying a lot of baggage, going through a lot of pain, experiencing seriously messed up or tragic things in our lives. And the rest of us picked those people up and lifted them into a place where they can for one night have fun, experience joy, and discover hope. The hope of Wayne Coyne and the other Lips is that through the power of fun, a Flaming Lips concert might just help you become a better person.

With those words the Flaming Lips launched into the most beautiful rendition of “Do You Realize?” that I’ve ever heard, and in that moment I realized something about that song. I realized that Wayne isn’t singing to some person in his life that he loves, some specific individual, or particular face. Instead, “Do You Realize?” is Wayne’s message to all of humanity, for each and every one of us to apprehend that we have the most beautiful face, that it is stunningly incredible that we exist and are alive, that this precious gift of life we’ve been given is short, and that we ought to cherish every moment, every interaction, every relationship, until we finally move on from this world into whatever comes next. 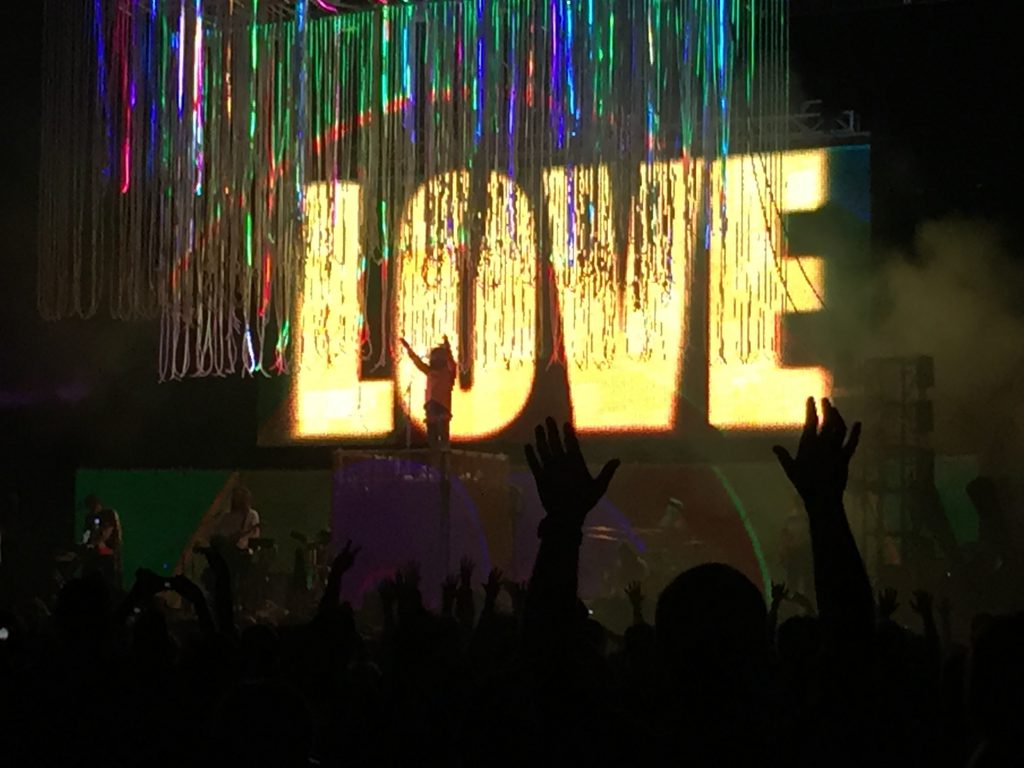 Did the crowds of Musikfest have this experience? There’s no way for me to know. But as we departed the Steel Stacks, virtually everyone was beaming, grinning from ear to ear. There were more than a few shocked faces as well, people who had the look of someone with no idea what just happened to them. But by the time I made it to “Aw Shucks” for some roasted corn on the cob, word had already spread throughout the rest of Musikfest that something significant had just happened. Perhaps through all the fun, silliness, and music, the message of love got through somewhere.

And Tony? His words were something like “yeah, it was fun.” No mind-blowing existential experience. No earth-shattering revelations. Just fun.

But that’s just it. That’s the Flaming Lips’ secret. Fun was all they were ever really after. 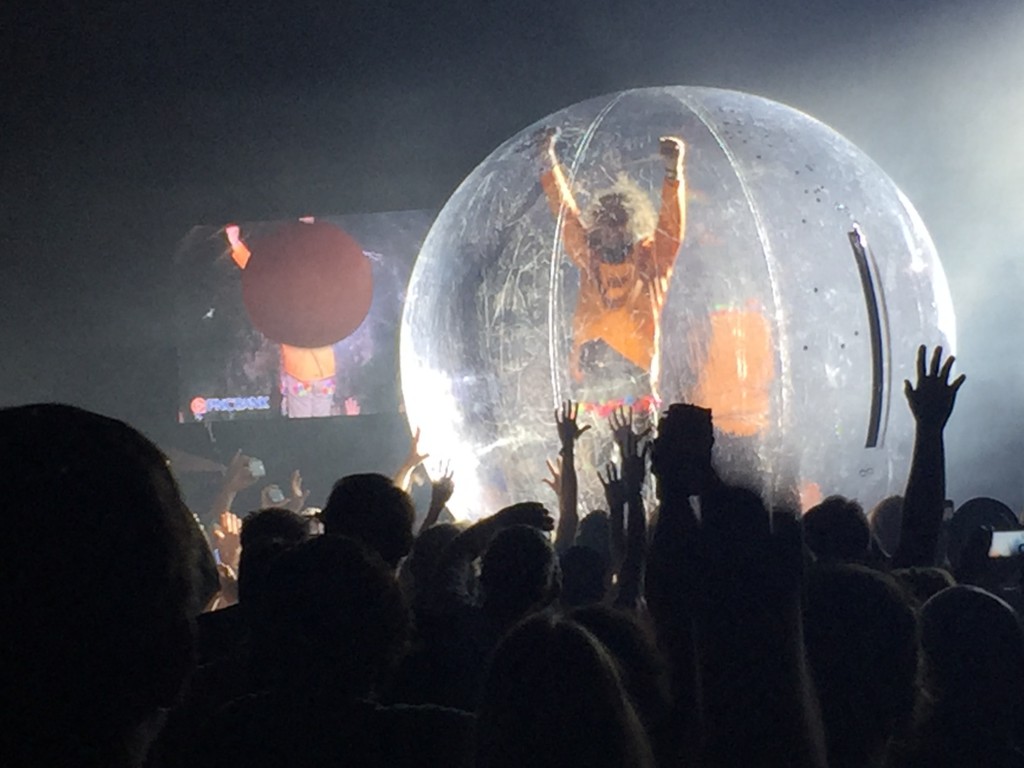