This brings my viewing of the Nikkatsu Diamond Guys Vol. 2 collection from Arrow Films to a close, and I think it turns out I actually watched these in the right order. While Murder Unincorporated didn’t really work for me and Tokyo Mighty Guys only succeeded by being a sensible narrative, Danger Pays was a good bit of fun, a balance between the absurdity and intrigue of the other two films in this collection.

Danger Pays features the best cast members from the ensemble this studio seemed to exclusively work with, Jo Shishido and Ruriko Asaoka, adding the thoroughly enjoyable Hiroyuki Nagato to the mix. In similar fashion to Murder Unincorporated, they each play criminals with insane nicknames that imply their particular set of skills, such as “Dump-Truck” who drives a dump truck that he uses to break into places and torture people for information (the sense of humor the other films on this disc had is more subdued than I’m making it sound, but it’s still present). They each learn of paper that has gone missing, paper that is exclusively used to print yen on. In fact, over 1 billion yen’s worth of paper has gone missing. So they individually set out to not only steal the missing paper, but also convince Japan’s most legendary counterfeiter to turn it into said 1 billion in yen so they can exchange it for U.S dollars before anyone gets wise to them being counterfeit. Got that? If you’re following along, literal stacks of paper are this movie’s maguffin. 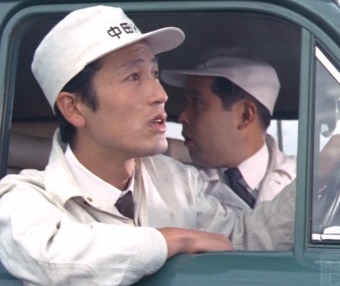 But of course, upon learning that they all have the same plan, they begin competing. That is of course, until the mob boss who stole the paper to begin with kidnaps the legendary counterfeiter, forcing our three anti-heroes to scramble in their attempts to be the last man standing with that 1 billion in fake yen. At various times they try working for the mob boss, working together to over throw the mob boss, using one another against each other to gain the mob boss’s favor – it’s all actually a lot of fun. There’s so many turns of allegiance, without the actual goal changing, and it’s all done with their silly, tongue-in-cheek humor, that you can’t help but get sucked in and have fun along the way.

This also featured some real action sequences unlike the other two films in this collection. It certainly doesn’t have any real fight choreography (as far as I’m concerned, that’s the signature staple of this studio – un-choreographed fight scenes where men just throw each other around a sound stage) but it does present some really fun gun play, and a pretty well staged elevator shoot-out. Also of note is the burlesque club that the counterfeiter, a very old, very married man, requests be his work space – there’s a hilarious shot of a woman dancing on glass above his counterfeit-lair. That’s right, he demands to be put directly underneath the stage, which is clear glass, to do his counterfeiting. Art begets art, I suppose.

All in all I would say Danger Pays is the best of the bunch in this collection, though overall this collection didn’t do much for me. There just aren’t interesting enough stakes in this studio’s pictures to hold my interest. But as historical artifacts they’re certainly fascinating, and I’d definitely recommend them to anyone curious about the history of Japan’s studio system.