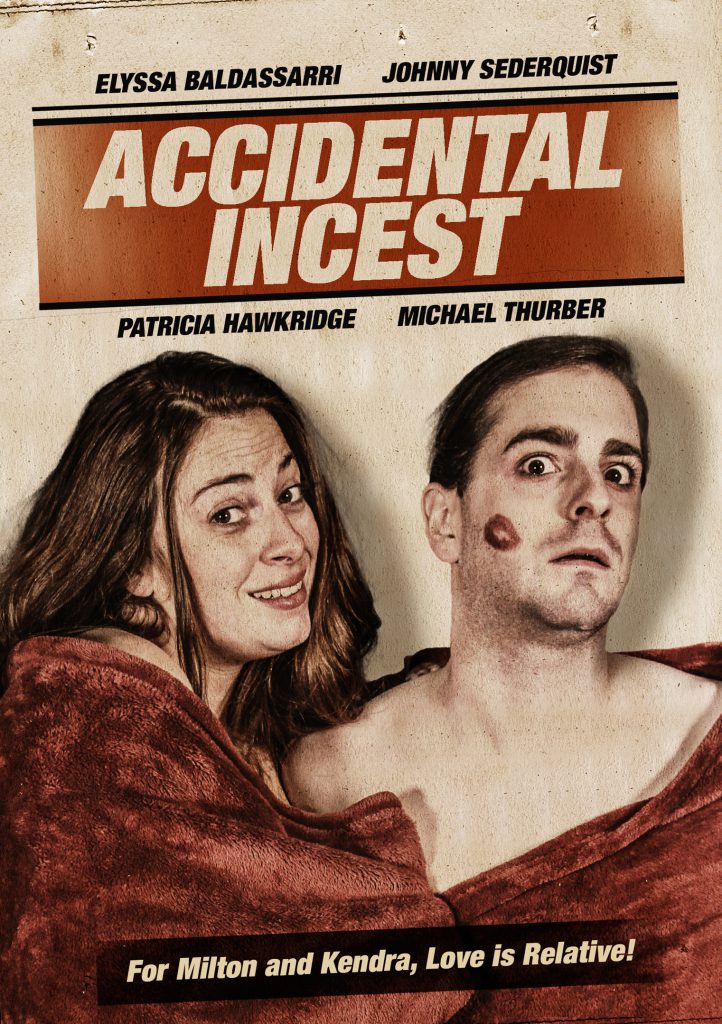 Accidental Incest is the story of two depraved misanthropes, Milton and Kendra (Johnny Sederquist, Elyssa Baldassarri), who (as the title suggests) are relatives: brother and sister. Of course, they don’t find this out until after they’ve had sex.  Both happen to get murdered, go to heaven, and get a second chance from their respective guardian angels. This is where the story starts. Both end up at a low-rent boarding house, and hit it off. After a little conversation, they discover that neither one grew up knowing their father, thus leading them to learn of their sibling status.

I didn’t particularly care for this film, and I’m not one to shy away from taboo topics. The sexual nature of this film isn’t what made me turn it off and fight with myself to finish watching it. No, the actors are the cause of distaste for this film. Perhaps, I’m expecting too much out of them though. I went into a film adaptation of an off-Broadway play, expecting it to translate to film seamlessly. It does not succeed in doing that. It’s pretty obvious by the stars acting that they are used to being on stage, and I wouldn’t say they are the best stage actors ever.

The production value is another issue that I had with Accidental Incest.  For the most part it is what you would expect. The black and white images are detailed and work well for this film, but certain effects feel last minute. Particularly the death and heaven scenes. Both actors upon being shot, appear to just have a bright red spot Photo-shopped where the bullet would wound them.  Maybe I’m being picky here, but is a little fake blood too much to ask?

As far as the DVD extras go, I’m pleased to have no complaints in that department.   The commentary on the disc features the film’s director (Richard Griffin), writer (Lenny Schwartz), stars (Johnny Sederquist and Elyssa Baldassarri), and producer ().  The commentators discuss the film and entire “Accidental Incest” experience animatedly and informatively. There is also a deleted musical number (deservedly deleted if you ask me). The film’s original trailer is also included in the bonus material.

My conclusion, if you happen to be a perv with a penchant for theater and black humor, maybe you should give this flick a go. Otherwise, I’d advise staying far, far away from this at all costs.