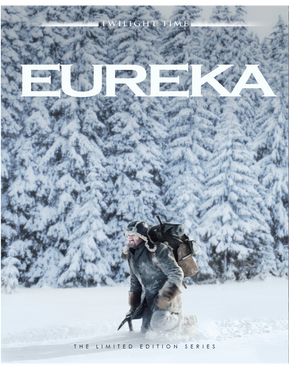 Eureka is a beautiful, mysterious film filled with themes of greed, lust and paranoia.  The film opens with us in a blizzard to see Jack McCann (Gene Hackman), a gold prospector, nearly freeze to death before being rescued by a fortune teller (Helena Kallianiotes). She arranges for through “supernatural” means for Jack to hit rich.

The story picks back up in the 1930s, where Jack is “the richest man in the world” living in the Caribbean on his own island, Eureka (Yea, the title is Eureka for striking gold, and Eureka for his own private island).  However, money hasn’t come close to buying Jack happiness. His wife is a drunken lush, and his daughter has married a playboy (Rutger Hauer)  whose intentions aren’t necessarily pure.  As Jack’s trust in everyone dwindles, he yells at his son in law,  “At first I thought you wanted my daughter. Then I thought you wanted my gold, Now I think you want my soul.”   In that moment, McCann isn’t exactly wrong.

What’s most intriguing about Eureka, is how it is largely forgotten. It’s arguably Nicolas Roeg’s magnum opus, and yet, he is most remembered for the fantastic thriller Don’t Look Now, (a personal favorite of mine). Perhaps part of why nobody seems to remember Eureka is the extremely limited release it received in 1984, despite its stellar cast which included Roeg’s then-wife Theresa Russell as McCann’s sensual daughter, Rutger Hauer as the playboy son-in-law, Joe Pesci  as a mob boss with plans to build a casino on the island, and a very young (still attractive) Mickey Rourke as Jack’s  consigliere.

I loved this film. I’m the type of film goer who wants to be swept up in the story no matter how far it veers into the uncanny valley, and loves when I forget who the actors are and start to think of them as the characters on the screen. (which was easy to do with this film) In investigating this film, I found out that it was loosely based on the real life tragedy of Sir Henry Oakes in the Bahamas in 1943. That alone is a reason to watch this movie, but you’ll stay for the splendid acting and beautiful cinematography and direction.