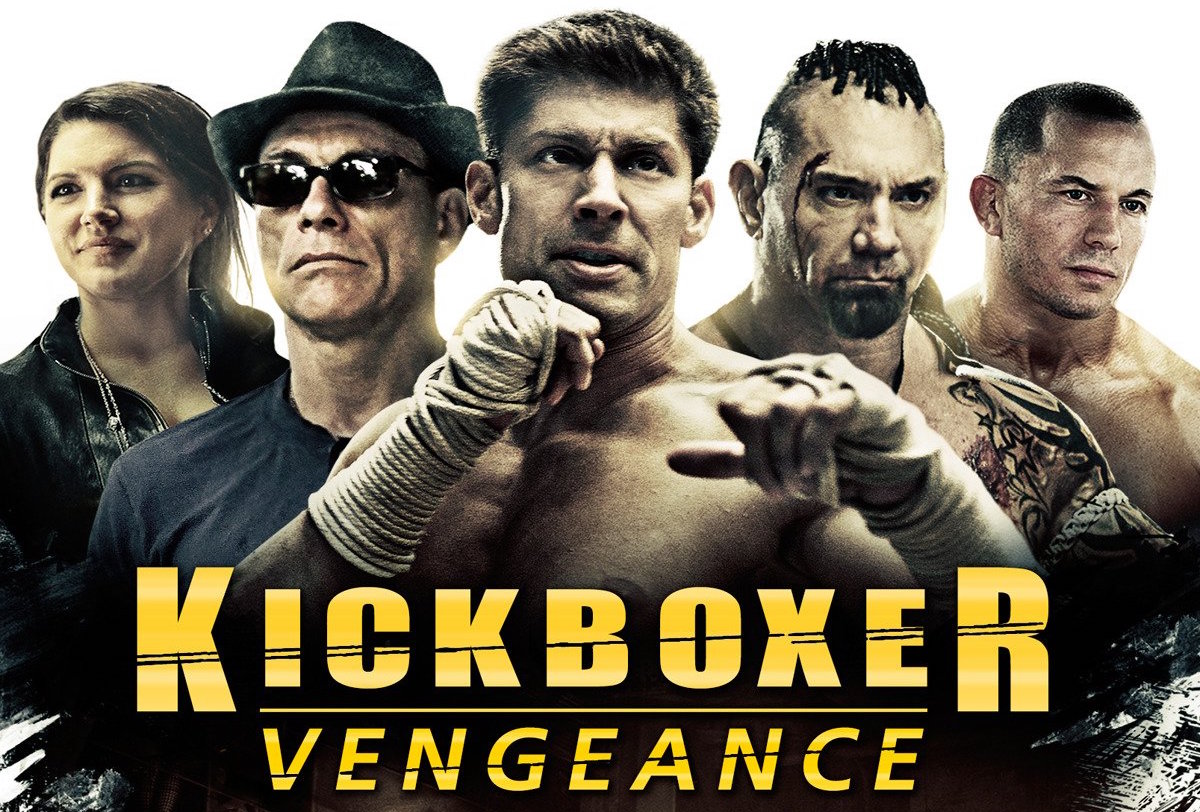 I like action films. I love action films. Deep thinking and socially relevant ones are pretty cool, but these days mark a true need to fill my film schedule with popcorn flick type action. In fact, I continue to grow more and more fond of action for action’s sake in my entertainment, especially loving films of the direct-to-video/direct-to-VOD variety. While Kickboxer: Vengeance wasn’t technically DTV, it had such a limited theatrical run and a strong focus on the VOD marketing, it may as well have been. Nonetheless, I’ve been excited to check this one out from the moment I heard about it… especially because WWE’s Dave Bautista was to be featured prominently.

First things first, Vengeance is essentially a remake of the original, with a fresh cast and Van Damme returning to the series in a new role, as the trainer and mentor of his original character, Kurt Sloane (now being portrayed by Hollywood stunt man Alain Moussi). I guess this is as good a way as any to reboot the series, although it begs the question why there couldn’t have been a new story with new characters that is tied to the original series rather than fully emulating it. Perhaps the sequel (already in production and featuring a cast boasting Christopher Lambert and Mike Tyson) will satisfy that craving, negating the questions altogether. Nonetheless, that’s the setup here. It’s a retelling of the classic.

There are some great merits to this film and some things that leave a bit to be desired. Yet, at the end of the day, it’s a fun watch for fans of martial arts films, unless you happen to be one of those “you’re ruining my childhood” types (in which case, any reboot wouldn’t have satisfied you). The fight scenes are well done, JCVD is fantastic as Master Durand (a role originally given to Tony Jaa, who had to leave due to conflicting commitments), Bautista is an imposing bad ass version of the villainous Tong Po, and the overall look of the film is solid. The acting isn’t always top notch, but the film is able to overcome that through providing a few really great fight scenes and JCVD’s fully in-tact charisma.

It is fair to say that lead Alain Moussi shows his inexperience as an actor. Emoting is not really his thing, often feeling very stiff throughout. He never really feels natural when acting. On the other hand, he’s obviously a natural when he’s fighting. He looks completely in his place in the midst of a hand-to-hand battle (or weapon-to-weapon battle, as it were). His ability to fight is strengthened by surrounding him with other great fighters like multi-discipline champion TJ Storm, UFC star Georges St-Pierre, and a brief scene of Darren Shahlavi as Eric Sloane (Kurt’s older brother who is killed by Tong Po). Of course, this brings us to the only screen presence that is more captivating than JCVD’s, Dave Bautista.

All said and done, every time Bautista is on the screen, you must pay attention to him. From his unique look to his imposing presence, he is the best casting job in the film, hands down. To overlook the significant impact of his stature, physique, and demeanor would be foolish. He looks the part of a man beast and is able to present a strong, stoic facade that is needed to pull off the idea of him being a master. At his size, many such villains are uncontrolled monsters and that ultimately becomes their undoing. Bautista, as Tong Po, is calm and collected, a calculated assassin that needs nothing but his bare hands to rip you in pieces. While he certainly doesn’t have the likability he has in a role such as Drax the Destroyer in Guardians of the Galaxy, he draws your eyes to him every time he’s on screen. It’s hard to argue that he’s not a near flawless villain, despite being in a flawed film. If anything, he simply doesn’t get enough screen time.

The sequel should hopefully remedy Moussi’s lack of natural feel and comfort for the reason of it being his second lead role alone. This can hopefully make up a bit for the fact that we lose Bautista in the sequel. The rest of that gap will hopefully be more than filled by adding Lambert and Tyson to the mix. So, you can count this reviewer among those excited to see where this new trilogy of Kickboxer films takes us.

Grab your copy of the film on Amazon or your favorite VOD platform today if you enjoy a good action flick to help you escape reality for a couple of hours. If you’re not sold, stay tuned because it’s relatively certain I’ll be talking to you about the sequel in due time.

[Editor’s Note: One last word goes out to the family of Darren Shahlavi, whom passed away in his sleep of a heart attack after filming this movie. At only 42, it’s truly sad to see someone pass unexpectedly. 2016 has really been a bitch and, while it is only a mere gesture of support, our thoughts and prayers go out.]