IMDb Plot: In this retelling of Gunga Din (1939) transplanted to the 1870’s American West, three cavalry officers and a bugler work together to thwart a Native American chief intent on uniting local tribes against the white man.

A Pack of Rats is Called a Mischief

Upon its release, critics chalked up Sergeants 3 – a Civil War era remake of George Stevens’ Gunga Din – to little more than a “$4,000,000 home movie”. They’re not exactly wrong. After electrifying, both, Kennedy’s bid for president and the Sands’ marquee (not to mention Ocean’s 11’s five million dollar haul), the Rat Pack was poised to do whatever project they wanted. Warner Brothers agreed. And so, the Pack set out to make their boozy, bro-y lightning strike theaters twice.

Sergeants 3 would see Sinatra and Co. converting from 20th Century con artists to 1870’s cavalrymen. Unfortunately, this fact would force the Boys to vacate their Vegas playground to shoot in the vacant cowtown of Kanab, Utah. Despite Vegas and Kanab being a mere two hundred miles apart, Kanab must’ve felt like a moon colony. According to James Kaplan’s biography Sinatra: The Chairman:

The movie shot from late May through June in Kanab, and the biggest challenge for the cast was the the crushing boredom of the isolated high-desert location. “There was a Dairy Queen that was open until eleven o’clock,” Bishop recalled. “My advice to everybody was to get two scoops, because after that there wasn’t a goddamn thing to do.” The Rat Pack would have to make their own mischief.

The Summit’s first step was to pay the Parry Lodge (Kanab’s sole hotel) to tear down a few of its top-floor walls in order to put up a party suite. There, the Pack played poker, pounded drinks, lit firecrackers, and laid a “planeload of girls from Vegas”. Laurel and Hardy shorts were often shown. Sammy Davis Jr., too, screened his own home movies in Kanab High’s auditorium with free ice cream and popcorn for all attending Kanabians. Kanab High also made $50,000 for letting the Clan land their helicopters on their Cowboys’ football field each Monday morning after a weekend at Vegas’ Sands.

The final fix for making the set of Sergeants 3 feel like the Strip was to fill out the film’s cast with friends – trusted, treasured industry veterans who could surf the Summit’s unparalleled partying and pride. Highlighted below are the coveted, rarely covered cronies who the Rat Pack made the point of planting in, both, their Ocean’s 11 and Sergeants 3 casts (and, in some cases, the cast of Robin and the 7 Hoods – the last Rat Pack film). 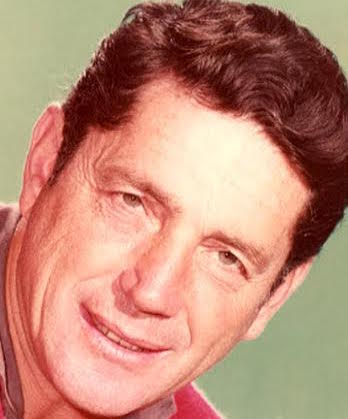 Stand-In/Stuntman. Upon debuting as ‘Garcia’ in 1937’s A Star is Born, Joe Gray kicked off a career that would take him from real-life boxer to on-screen boxer, to stunt man, to fight coordinator. Though Gray took regular hits for such Hollywood heartthrobs as Tony Curtis and Elvis Presley, Gray is most closely linked to the films he shot with Dean Martin – a gig that started with 1950s second Martin & Lewis comedy (My Friend Irma Goes West), then stretched to thirty-four more films in a twenty-one year span.

Curiously, Joe Gray does not appear in many Martin biographies. But Joe’s brother Mack Gray does. Himself a former stand-in (for George Raft), Mack Gray made himself Martin’s all-purpose assistant -taking on such tasks as co-writing the B-side “Ridin’ Into Love”; managing Dino, Desi and Billy (Martin and Lucille Ball’s sons’ band); filling in as The Dean Martin Show’s occasional musical coordinator; and, allegedly, supplying Martin with barbiturates. Over time, Martin would grow to rely so intensely on Mack that Martin’s first wife, in a People interview, cites Mack Gray’s death as the first of three loses that drove Martin into a lasting depression.

Ironically, Joe Gray’s death also involved Dean Martin as Gray collapsed dead of a heart attack during Martin’s Something Big shoot in Durango, Mexico. Seven years later, Henry Miller dedicated an essay to Joe Gray in his collection, My Bike and Other Friends.

Gray’s other Rat Pack-related work includes At War with the Army, The Caddy, Scared Stiff, 3 Ring Circus, Pardners, Hollywood or Bust, Ten Thousand Bedrooms, The Young Lions, Rio Bravo, Who Was That Lady?, Bells Are Ringing, Ada, Who’s Got the Action?, What a Way to Go!, Kiss Me Stupid, The Silencers, Murderer’s Row, The Ambushers, How to Save a Marriage and Ruin Your Life, Bandolero!, 5 Card Stud, The Wrecking Crew, and Airport (all w/ Dean); Guys and Dolls, The Joker is Wild, Some Came Running, The Manchurian Candidate, Toys in the Attic, None But the Brave, Von Ryan’s Express, (all w/ Sinatra); and 4 for Texas (w/ Sinatra and Dean). 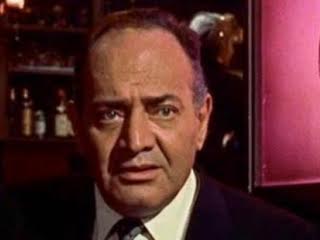 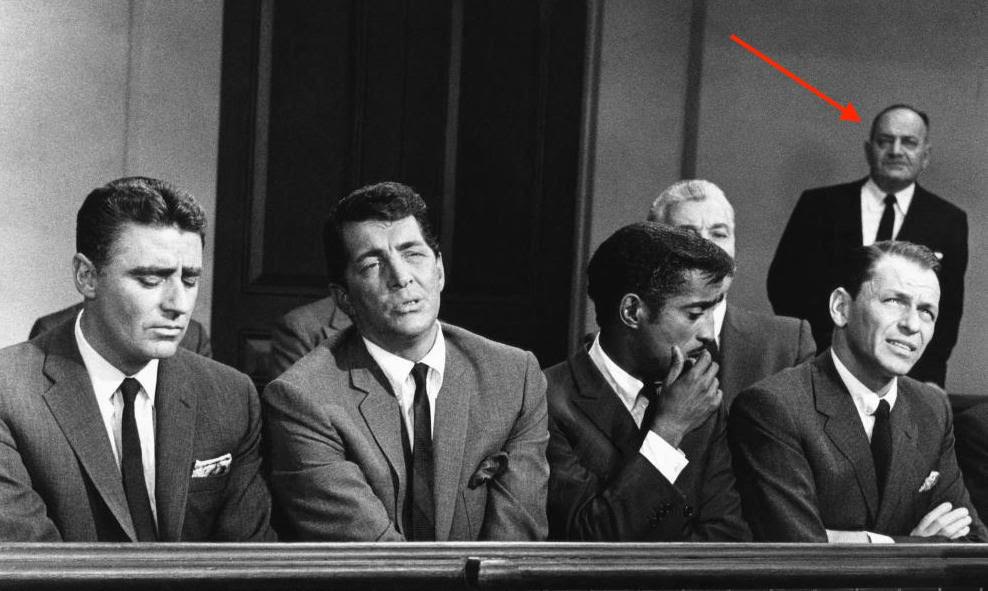 Mr. Kelly the Mortician in Ocean’s 11 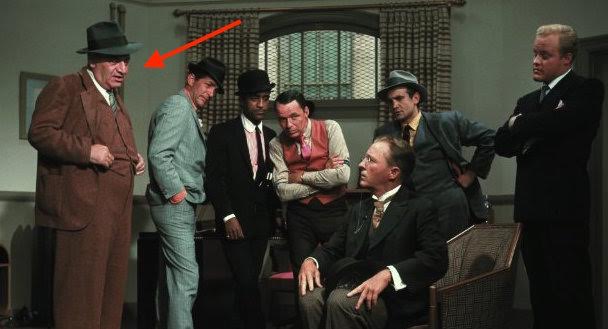 Six Seconds in Robin and the 7 Hoods

Comedian. In 1950, Hank and Joan Henry arrived in Las Vegas possessing only three suitcases and a station wagon, between them. By September, Henry was headlining the new Golden Slipper Saloon –fronting four shows a night, seven nights a week.

But there were girls. By sharing the Saloon’s stage with such scantily-clad acts as Terre Sheehan (‘The Girl in the Champagne Glass’) and Bubble Darleen (‘The World’s Most Fabulous Body’), Henry was no stranger to skin. In fact, Henry’s only major film credit came with the early nude film Not Tonite Henry -a film in which the sex-starved Mr. X (Henry) imagines the busty babes that Samson, Marc Anthony, John Smith, and Napoleon all must’ve ogled. Despite the ladies sporting pasties, Los Angeles deputies still stormed a Monica Theater screening -confiscating its print and taking the Monica’s manager, owner, and projectionist into custody. After a seven day trial cleared the Monica’s staff of criminal obscenity, Henry was allowed to re-screen -shattering the Monica’s attendance record.
Henry’s other Rat Pack related work includes Pal Joey (w/ Sinatra), Pepe (w/ Sinatra, Martin, Davis, Lawford, and Bishop in cameos), Johnny Cool (w/ Bishop, Davis, and produced by Lawford) and TV’s The Thin Man: ‘The Case of the Baggy Pants’ starring Peter Lawford. Hank Henry also named his fourth child, Frank, after the child’s godfather, Frank Sinatra. 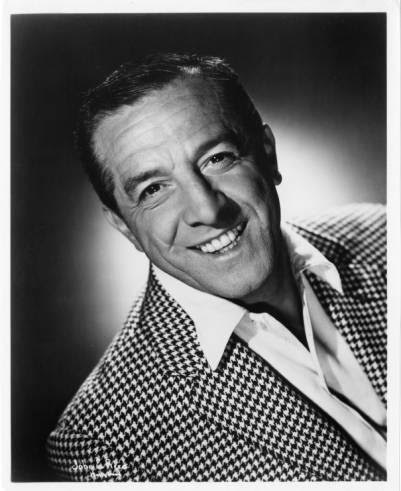 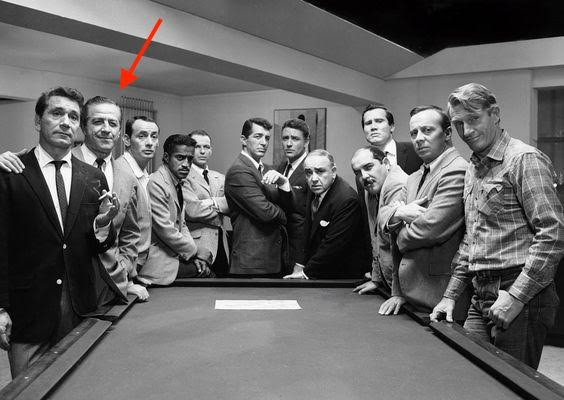 Comedian/Actor. At age six, Lester’s mother died. The next year, Lester entered his father’s field: Chicago’s comedy scene. According to Lester, Al Capone was a big fan -fixing Lester up in clubs that he couldn’t legally enter due to being under-aged. Coincidentally, Lester would later play Capone in the 1973 TV movie Poor Devil -a farce in which one of Satan’s stooges (played by Sammy Davis, Jr.) must steal his first soul in order to promote himself out of Hell’s coal room. 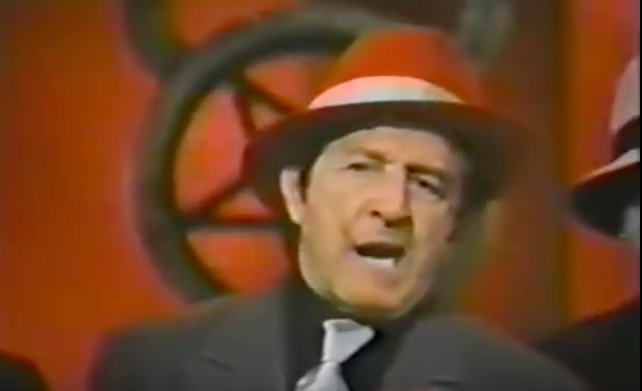 The Rio gives Buddy a fine supporting show…Surprise hit of the show is Dean Martin, a tall and handsome singer, who, when he got over the opening night jitters, proved to have a healthily appealing voice and a nice, quiet manner. His repertory ranges from “Temptation” to “Personality” and included, of course, “Symphonie”. He’s a coming song star.

According to Jerry Lewis, Lester also played a part in Lewis & Martin’s first talk of teaming up when, over the phone, Dean Martin initially mistook Lewis for Lester’s older brother Jerry (also a comedian). Martin never forgot Lester. In fact, in Billboard’s March 17th, 1951 article “Big Dough, Big Aches Wind Up M&L Story”, Martin is accused of lifting Lester’s on-stage schtick: “Martin picked up much of his comedy stuff from Buddy Lester, who frequently asked for Martin to be on the same bill with him.” Lewis loved Lester, too. Out of Lewis’ fourteen self-directed feature films, Lester appears in seven of them. (Combined, the Rat Pack and Lewis films make up nine of Lester’s twelve big-screen credits.) Lester is also known to have occasionally opened for Sinatra at the Sands.

Actor. History seems to have nothing to say about Sell. Of his 120 IMDb credits, Sell only portrayed a named character thrice -stopping at the 1958 episode of The Adventures of Ozzie & Harriet in which Sell played ‘Ed’. Otherwise, Sell was most often stuck in Patron or Party Guest roles. By all accounts, Sell seems to have worked as a professional extra who, by magic, happened to stumble onto the Rat Pack’s set three shoots in a row.

Sell’s other Rat Pack-related work includes a part as Senator in Advise & Consent (w/ Lawford) and the roles of Casino Patron and Party Guest, respectively, in Dean Martin’s back-to-back Hollywood or Bust and Ten Thousand Bedrooms. 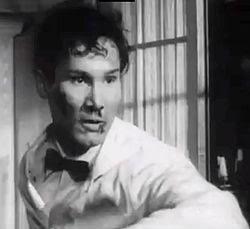 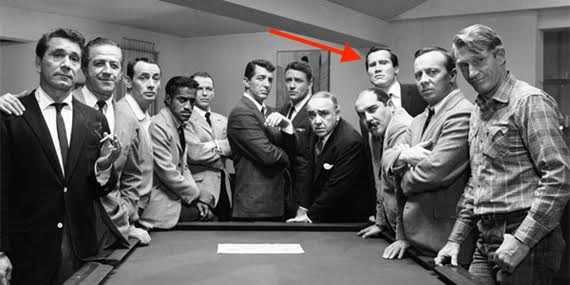 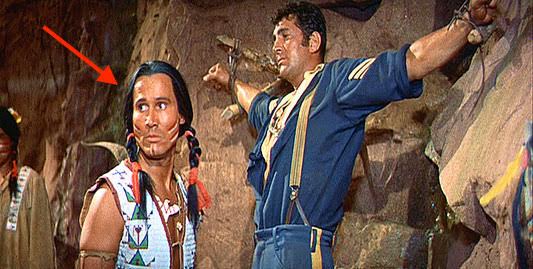 Actor. Despite having been cast in less than a decade’s worth of work, Silvia had still struck enough of a screen image by 1958 for Sinatra to spot him one day as both men idled at a red light on Sunset. “Hi, Henry! I like your work!” Silva recalls Sinatra shouting seconds before speeding away. Months later, as Silva filmed Green Mansions on MGM’s lot, he dropped in to surprise Sinatra on the set of Some Came Running. Upon a proper intro, Sinatra reportedly offered Silva Ocean’s 11 on the spot. Post-Ocean’s, Silva hung with Sinatra through the Sixties -peaking in ‘62 when Silva and Sinatra shot, arguably, Hollywood’s first karate fight in The Manchurian Candidate. (Silva lost.) Tired of being typecasting as a criminal, Silva left Hollywood in 1965 for the lure of heroic roles in Italy. He and Angie Dickinson are the only Ocean’s alumni to have cameoed in Steven Soderbergh’s Ocean’s Eleven remake. 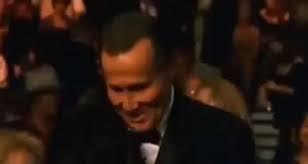 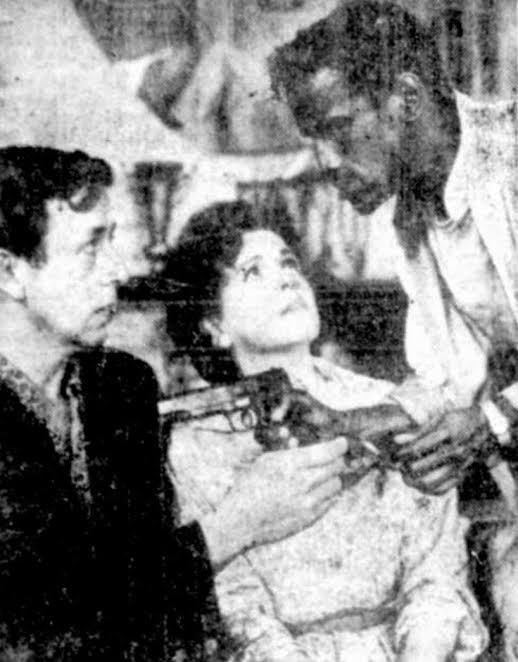 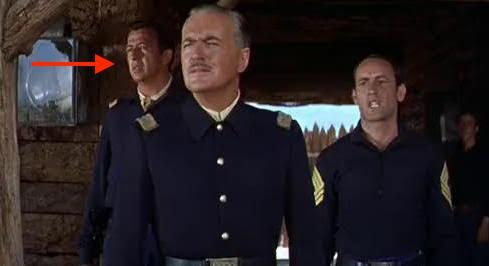 Not Pictured: Disposal Attendant in Ocean’s 11

Actor/Assistant. While visiting Kim Novak in secret on the set of Vertigo, Sammy Davis Jr. made friends with Novak’s dialogue coach Luddy Waters -wife of the struggling actor James Waters. According to Davis’ biography, Gonna Do Great Things: The Life of Sammy Davis, Jr., “When the Waters home burned in a fire, Sammy generously let Jim and Luddy move into a house [Davis] had rented but never used on St. Ives Drive.” Grateful, Mr. Waters elected to handle Davis’ correspondence -eventually ascending to the role of Davis’ office-manager. In 1958, when Davis forged history by race-switching the stage role of convict Glen Griffin in Joseph Hayes’ The Desperate Hours (a role created by Paul Newman and played on-screen by Humphrey Bogart), it was James Waters who dared to play Dan Hillard -the white father of the family who is held hostage by Griffin. Well-received, Hours helped to prove Davis’ capabilities as a dramatic actor.

Waters’ other Rat Pack-related work includes Pepe (w/ Sinatra, Martin, Lawford, Bishop, and Davis, Jr. in cameos) as well as Nightmare in the Sun and episodes of Lawman, The Dick Powell Theatre, 77 Sunset Strip, and I Dream of Jeannie (all co-starring Sammy Davis Jr.) 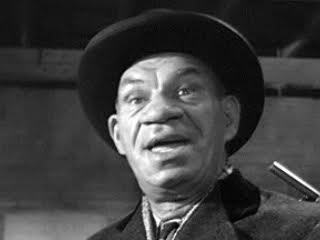 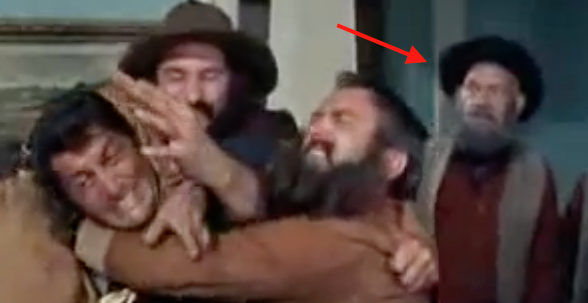 Gisborne’s Hood in Robin and the 7 Hoods

Not Pictured: Bystander/Casino Customer in Ocean’s 11

Character Actor. Like Sells, Wilson’s participation in the Rat Pack’s pictures appears to be purely professional. Unlike Sells, however, Wilson’s work at least warrants a Wikipedia page. In Billy Wilder’s Some Like it Hot, Wilson’s face is the first we clearly see -immediately establishing the crucial tone of being, both, scary and hilarious. Furthermore, in ‘55, Wilson sang on two soundtracks: It’s Always Fair Weather and Guys and Dolls -opposite Sinatra, himself. Billing himself ‘The Ugliest Man in Pictures’, Wilson worked with Ocean’s director Lewis Milestone four times prior to being cast in the Rat Pat production. (Milestone’s 1928 noir, The Racket, was Wilson’s first film.)