I began my foray into the world of Herschel Gordon Lewis via The HGL Feast box set from Arrow Films, starting with Blood Feast, his first Splatter film, and found it rather boring and amateurish despite a few noteworthy flourishes. I remain hopeful that there are good things to come as I watch 13 more of his movies. 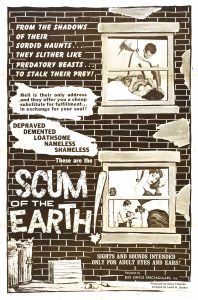 And so my journey continues, immediately taking a departure from the Splatter genre I’m truly here for and dipping into what Lewis himself refers to as a “roughie” with what would be his last black-and-white feature, Scum Of The Earth. The term “roughie” refers to films in which women are treated “rough” by men. To be explicit, they often feature violence against women, both physical and sexual in nature. Now the reason I’m front-loading this review with this info is because HGL himself front-loads the movie that way – in the HGL Feast box set, there are little introductions to each film by the man himself, in which he instructs you on what you’re about to watch and what to look out for. It’s here that Lewis claims he set out to make a movie with the sole purpose of “testing the water as to whether theaters and theater-goers would accept it.” And as he puts it, with a grin on his face, “they did.”

Truthfully there’s another reason I front loaded this review with that information – it’s because I’m about to tell you how much I like Scum Of The Earth, and I want you to know that it is in fact a morally reprehensible, potentially irresponsible movie about a seedy gangster that entraps women into posing for nude photos, hires male models to essentially rape them while they pose, and features a “romantic lead” in the photographer who allows most of it to happen until the end when he can’t take it anymore. I’d like to repeat – this is morally tough and “rough” stuff that I don’t think the movie has a real point-of-view on and is only using to shock you, which I’m not necessarily on board for.

Now that all of my moral dilemmas with the film have been laid out, let me tell you why I liked this movie so much. Apparently shot over 6 days, a mere two weeks after completing the filming of Blood Feast, Scum of the Earth is a more accomplished film than Blood Feast in almost every aspect. It features almost all of the same cast members as Blood Feast, and while in Blood Feast I found every single performance to be wooden in the least entertaining way possible, suddenly here they’re all giving great, more fleshed out performances as much more interesting and layered characters. I would imagine this is partly due to the script, which HGL himself wrote this time around (A. Louise Downe, one of the stars of Scum of the Earth, is credited with the writing Blood Feast), as it features much better characters that actually have some dimension to them. That said, it’s actually astounding how much better the performances are here, since just weeks before this they were all so terrible in another movie by the same man.

But it’s not just the performances. Where Blood Feast felt amateurish and haphazard in its editing, the way shots were framed, and all the angle choices, this feels measured and specific in all of those areas. This is a great looking movie, which makes me think black and white might just be where HGL excels, though it sounds like the rest of the movies in the set will be in color, so hopefully the dramatic improvement he made as a filmmaker in a few short weeks continues as I go forward. I can’t stress enough how good looking this film is, especially in comparison to Blood Feast.

The story is where things get hairy. The “hero” of the movie is meant to be the photographer (though HGL is clear when he refers to him as “the romantic lead, if you can call somebody in a movie like this a ‘romantic lead’”) who not only watches the women he photographs be abused with little hesitation, but is complicit in ensuring said abuse happens on some occasions. It’s essentially the story of a man who knows he’s downright evil, the titular Scum of the Earth, and seems to hate that about himself but feels powerless to change it in the face of his evil employer. Except that he’s not powerless, as he proves in the final confrontation when he simply cannot abide it anymore. I personally do not consider this heroic, but the movie certainly seems to, and it even seems to think that it’s a heroic piece of filmmaking, as a heretofore unheard narrator suddenly enters the film for it’s final 15 seconds and exclaims “For every girl who escapes the trap, another falls into it – only an alert society can rid itself of those who prey upon human weakness – the scum of the earth.”

My problem with this is that in his introduction to the film, HGL explicitly says he was trying to offend the audience. There is no morality tale here; this is not an after school special, even if he tries to spin it like one in the end. This movie strictly exists to make your blood boil, and it will. So in some sense, the film is a wild success – it succeeds on the terms which HGL set out to make it on. And as a film, a story with interesting characters and unexpected turns, designed and put together artfully, I don’t think it could be argued that it’s not a success. And yet, there are moments where it seems clear HGL is trying to titillate the audience into remaining in their seats and watching the abuse of these women, an apparent bid to see “whether the would accept it.” That manipulative line he’s walking seems irresponsible to me – it makes the film’s perspective debatable. Is this supposed to be sexy or disgusting? For me, the answer can’t be both. It could be disgusting and presented in a sexy way, it could be sexy and presented in a disgusting way. But the events themselves can’t be both sexy and disgusting – there needs to be a clear point-of-view here and I just don’t think there is.

Despite that, I really did like this movie. Perhaps it only seems as good as it does in comparison to Blood Feast, but whatever the reason may be, I did enjoy it. I even had fun with some of the b-movie elements of it, where in Blood Feast it just wasn’t working on any level for me. For instance, Mal Arnold, the guy who played the very old man that is the killer at the center of Blood Feast, plays a “minor” in Scum of the Earth. It was clear in Blood Feast that they hired a 30 year old to play a 60 year old and just put some light make-up on him, which is only made more hilarious by the fact that in the same year he played a 17 year old for the same filmmaker. He looks neither 60 nor 17 – he looks exactly 30, and as a result every time he exclaimed that he was a minor (which hilariously happens multiple times throughout the movie) I laughed out loud. So even in the mire of gross that is this movie, I still had a few uproarious moments of b-movie joy.

Obviously, I’m at odds with this movie. I’d be curious to hear other’s thoughts on it, and on my assessment of it. Am I an asshole for enjoying this? Am I missing the moral center of this and being unfair to it? Sound off in the comments and remember our mantra my dear friends – splatter matters.