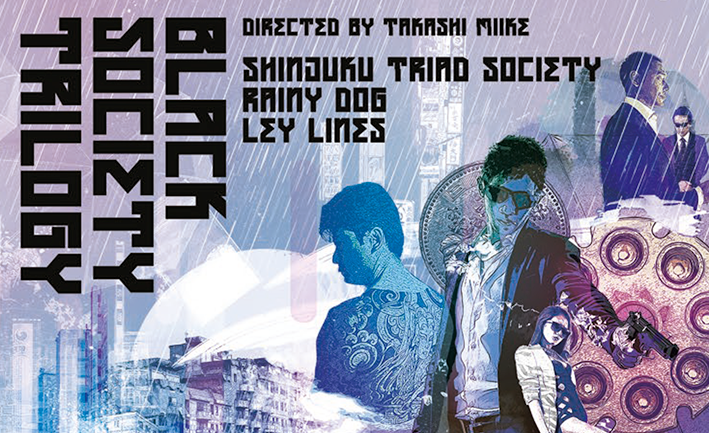 There are two types of film aficionados: those whose heart skips a beat at the mention of Japanese director Takashi Miike, and those who are sane. Among the former are two other broad subsets: those who know Miike for his edgy crossover hits (Audition and Ichi the Killer) and those who have realized that the majority of Miike’s films are Japanese gangster/crime films.

Among his vast filmography (nearly 100 films deep!) only 34 were released between 1991 (his first film, Eyecatch Junction) and 1999 (which featured seven different titles, including Dead or Alive and the aforementioned Audition). It’s a period of his output that has largely remained out of sight to the US.

To its credit, Arrow Films has picked out Miike’s Black Society Trilogy for the Blu-ray treatment. The three thematically linked films, Shinjuku Triad Society, Rainy Dogs, and Ley Lines bundled together in a set, serve up three different angles on the underbelly of Asian crime.

Those who have watched more than a handful of Miike films probably picked up on a certain hyperactive quality to the way he conveys narrative. You could look at his plots as fever dreams that riff concepts and refuse to spoonfeed the viewer, or you could consider his narratives as being filmed for audiences more used to different storytelling techniques, or you could just assume that he really doesn’t know how to wrangle all the big ideas he has into something cohesive. I sure don’t know the answer on that front, but Shinjuku Triad Society is certainly another in that vein. And being an early Miike film (only his 13th IMDb credit!), its hyperactiveness feels raw and scattered when compared to later efforts like Ichi or Gozu.

It’s a film that showcases a battle of wills and wits between three basic groups: two rival yakuza gangs and the police. Our protagonist is a police officer, whose brother has fallen in with one of the yakuza organizations, lending an extra familial tension to his investigation.

Perhaps the most shocking element for your average viewer would be the amount of sex and rape. Most of the sex is of a homosexual nature, particularly between the men of one of the yakuza gangs. It’s at its most disturbing, however, when used as an interrogation technique by the police. Shinjuku Triad Society, or any Miike film, is not a place to gain moral lessons; we can only hope when historians look back on modern society, they don’t have Miike as their only reference point. 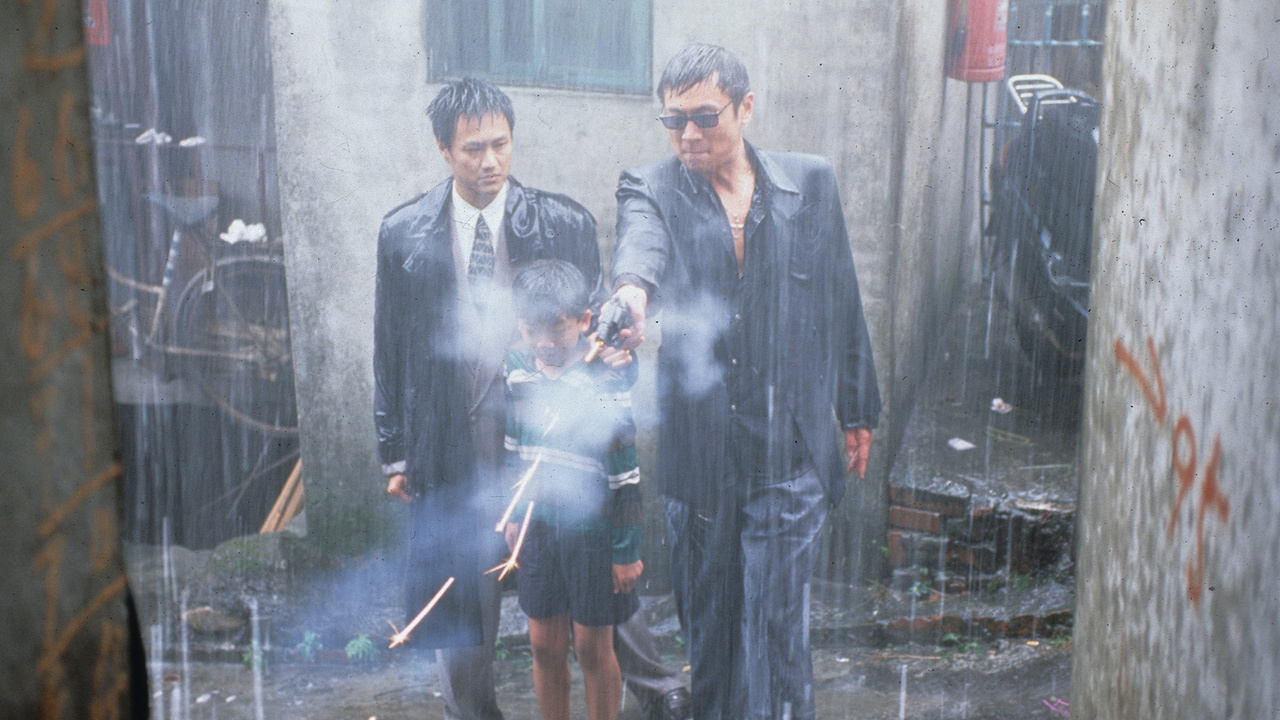 I have to admit that it’s disarming how different Rainy Dog is from the other Miike films I’ve seen. While I wasn’t expecting any sort of character crossover or plot continuation from the first film in the trilogy, there’s usually at least a stylistic and thematic something to hang your hat on, right? But let’s pick some words to describe Shinjuku Triad Society, just for fun: Edgy. Abrasive. Shocking. Hyper.

From the opening shot–a slow mosey through freshly butchered pork en route to a butcher shop–this is a different Takashi Miike entirely. It’s a patient film that pairs a hardened for-hire assassin with a child. His child, according to the woman he hadn’t seen in years. And when he pisses off the gang who hired him, he ends up on the run with this kid and a prostitute.

It’s a ponderous, patient film that demands you reach deep inside yourself (and, if you’re someone with a proclivity towards Takashi Miike’s more depraved side, it’s going to be very, very deep inside–consider me guilty as charged) and find that glimmer of parental instinct. Finding that parental instinct is going to be important because it’ll create one of the few tensions within Rainy Dog that actually matters.

It’s so sentimental it hurts. From watching the kid following the assassin through through grim, rain-slogged Taiwanese streets while a stirring, Americana-influenced soundtrack settles into the background, to the “Woohoo!” the assassin hollers as he, the kid, and the prostitute zip down cobbled stone streets on a Vespa, this is a film that demands emotional engagement.

But the thing is, Rainy Dog is the most cohesive, complete feeling film I’ve seen from Miike. Yeah, it might be best to watch Rainy Dog on a day when you feel like sitting among a wad of eye-dabbed tissues. Hell, it would slot right in as a doubleheader with Road to Perdition. But it’s good.

In my mind, Ley Lines kind of ties the Black Society Trilogy together. It finds a middle ground between the hyperactive elements of Shinjuku Triad Society and the more straightforward narration in Rainy Dog. It’s a film that builds a lot of seemingly unrelated slice-of-life scenes to formulate something cohesive.
Our protagonists are three lowkey criminals and a prostitute looking for an escape. Their destination? Anywhere that isn’t here. To get anywhere else, however, requires some things they lack: money and a passport. The answer to both those things ends up being the local crime syndicate.

Where the prior two films in the trilogy had firm, obvious connections to the criminal underground, Ley Lines is much more coy. We see very little of the organization and its decision making process. Instead we see some of the run-ins our protagonists have with them as they attempt to procure passports. We see the way the organization holds little interest in the needs of three meaningless scoundrels. It’s only when direct action is taken against them that they end up responding in full force.

What we lack in direct yakuza action, we gain in the joined friendship of the four protagonists. Seeing them sitting on a rooftop, eating noodles, and bantering about hopes and dreams is phenomenal. Seeing their excitement when spending a day slinging bottles of toluene to make a couple of bucks. The context–while important–is but a spice to the way the characters grow during the film’s hour and 45 minutes. Miike is able to texture these characters despite keeping them at arm’s length. Names aren’t used for most of the film. Reasons behind their actions are shrouded. We just see them as they are, and sometimes that’s more powerful than images of the depraved (Shinjuku Triad Society) or the sentimental (Rainy Dog).

Even midway through Ley Lines I found myself questioning whether these three films needed to be considered a trilogy. However you decide to frame the criminal underworld link between them, it’s a tenuous connection. Each film can be viewed independently, no problem. But I have to admit that as Ley Lines flashed its ending credits, I really appreciated the fact that they are together. The journey of the three films, with no overlap of plot or character, feels complete. And as efforts early in Miike’s career, they provide an interesting glimpse into his maturation as a filmmaker.

In keeping with Japanese censorship practices, genitalia have been obscured in the two edgier films, Shinjuku Triad Society and Ley Lines. It’s not quite black bars across crotches, but it’s still an obvious post-filming obfuscation. A few words have been removed, at least from the subtitles, where they show up simply as asterisks. None of this strikes me as an Arrow decision, and I’d be surprised if uncensored versions of these films even exist anymore.

Speaking of subtitles, there are at least three different languages spoken throughout the three films. Any language that isn’t Japanese appears in brackets to showcase the differentiation. On the one hand it’s a fun decision to appropriately present the films, on the other there are places where following the dialogue gets a bit messy. The pure quantity of non-Japanese dialogue is larger than you’d expect, and I’m not sure how anyone ever understood what the hell was going on.

In any case, Arrow Film’s Blu-ray box set is a must-own for Miike fans. Even those unfamiliar with Miike might find Rainy Dog and Ley Lines to be a decent introduction to his style.