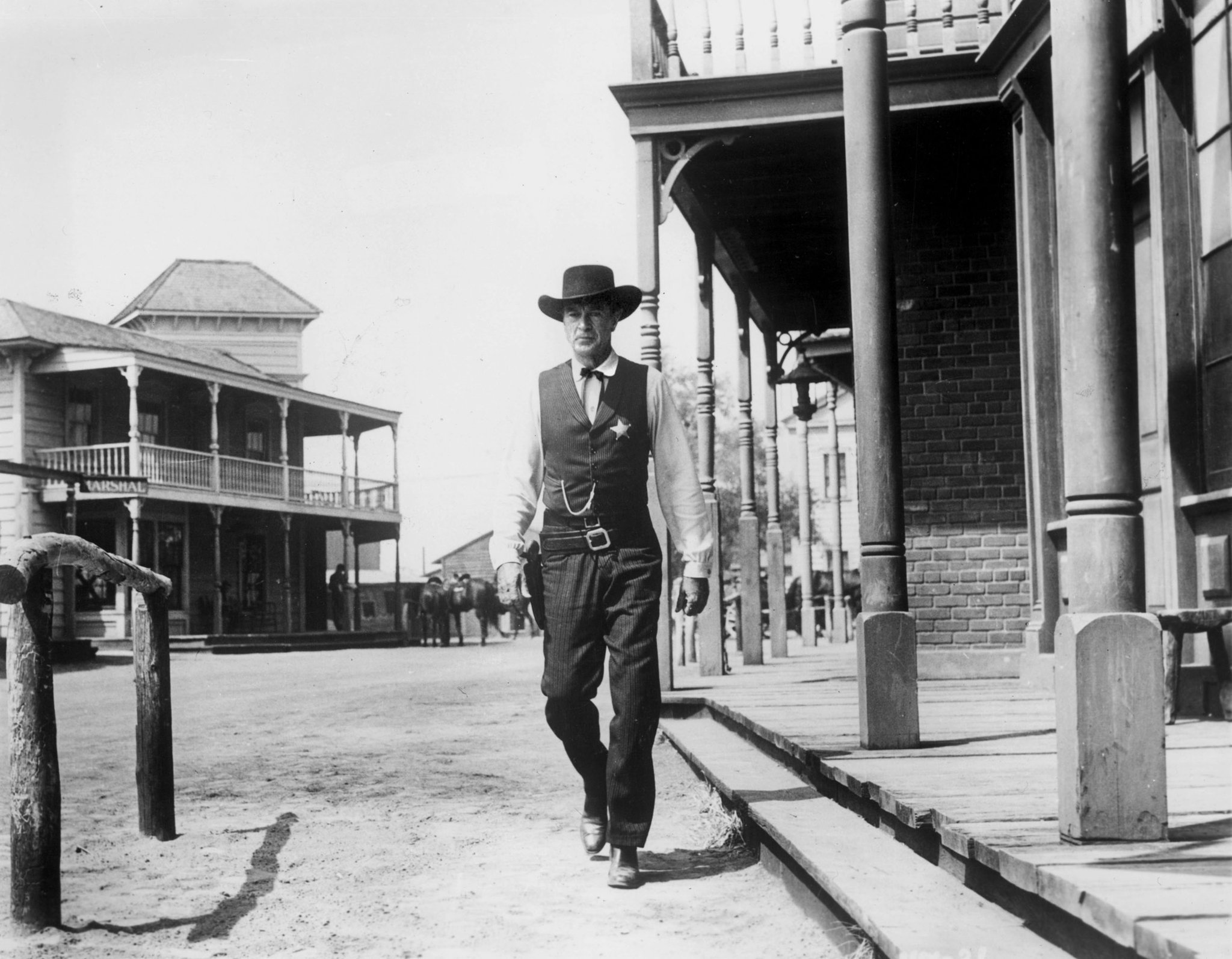 Hadleyville is a podunk town in New Mexico. It’s a quiet Sunday morning. Half the town is still in bed, nursing the last night’s hangovers, the other half is in church. At a small civil ceremony, aging U.S. marshal Will Kane (Gary Cooper) has just married Amy (Grace Kelly in her first major film role) a young Quaker woman. Directly after the ceremony he turns in his badge. He is starting a new life running a general store. The peace doesn’t last long. News comes from the train depot that Frank Miller is out of prison, and is due in town on the noon train. His old gang is already there, waiting for him. It seems Kane was responsible for putting Miller away a few years ago, and it looks like Miller is making good on his promise that when he gets out he’s coming back to kill Kane. With few options, and time running out, Kane decides to stay in town, raise a posse and face Miller and his gang.

That’s the premise for one of the last great westerns of the “Old Hollywood” era. 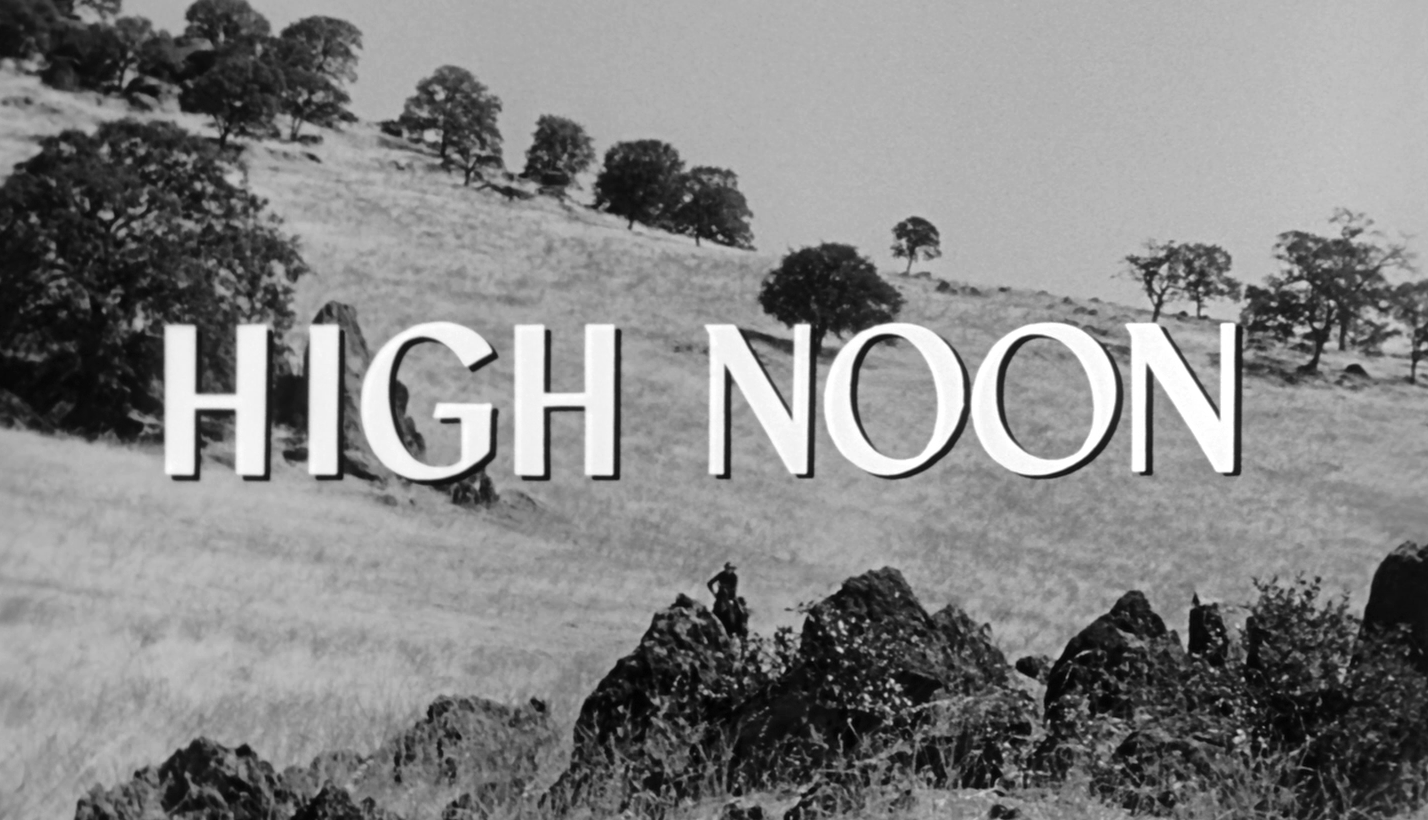 But what a difference 20 years makes. Growing up in the mid-nineties, before my family owned a TV (a religious thing, long story for another time), we had a Friday night tradition of watching old movies on VHS at my grandparent’s house. This was where my cinephilia was truly born and nurtured. High Noon is a film we watched a dozen times. Two decades later, revisiting High Noon again for the first time since, it felt like watching a different film altogether. What once I misinterpreted as a film about standing up for what’s right in the face of adversity, has become something far darker in my eyes, a film about the betrayal of honor and moral codes. Kane is stuck; he has no business staying in town because he’s already surrendered his badge, and no longer acting as Law and Order in Hadleyville. This showdown is about settling old scores. Old scores that Kane is too proud to leave behind. He’s less a heroic figure, than a victim; a man cornered without any options.

In an iconic shot, the camera pulls away from Kane and he begins to walk down a deserted street, flanked by the wooden buildings on either side, that make Kane look like he’s walking through the valley of death. It’s a lonely place, and he is made small and isolated, swallowed in a deserted town; the town he tamed and brought Law and Order to. And, in the film’s damning final shot, Kane takes the badge off his vest, and tosses it on the ground, before turning away. In the end, those codes of honor, and civility; the ideals of justice and order are only as good as the people following them. They have been reduced to a disposable tin star. They shielded no one. Instead of a victory for The Law, Kane’s shedding of the badge indicates a failure of The Law. It failed him.

Screenwriter Carl Foreman was on the Hollywood blacklist for suspected communist sympathies by Senator Joseph McCarthy’s House Un-American Activities Committee, and the paranoia and fear of that era permeate High Noon. Kane can’t depend on anyone. All the friends he thought he could count on want no part of the personal beef between him and Miller. Kane seems like a relatively unpopular marshal at that. He seems well liked by the law-abiding, respectable citizens of Hadleyville, but the other half of the town is comprised of the wilder elements of the Wild West, who seem to resent the way Kane cleaned the town and made it safe for women and children. 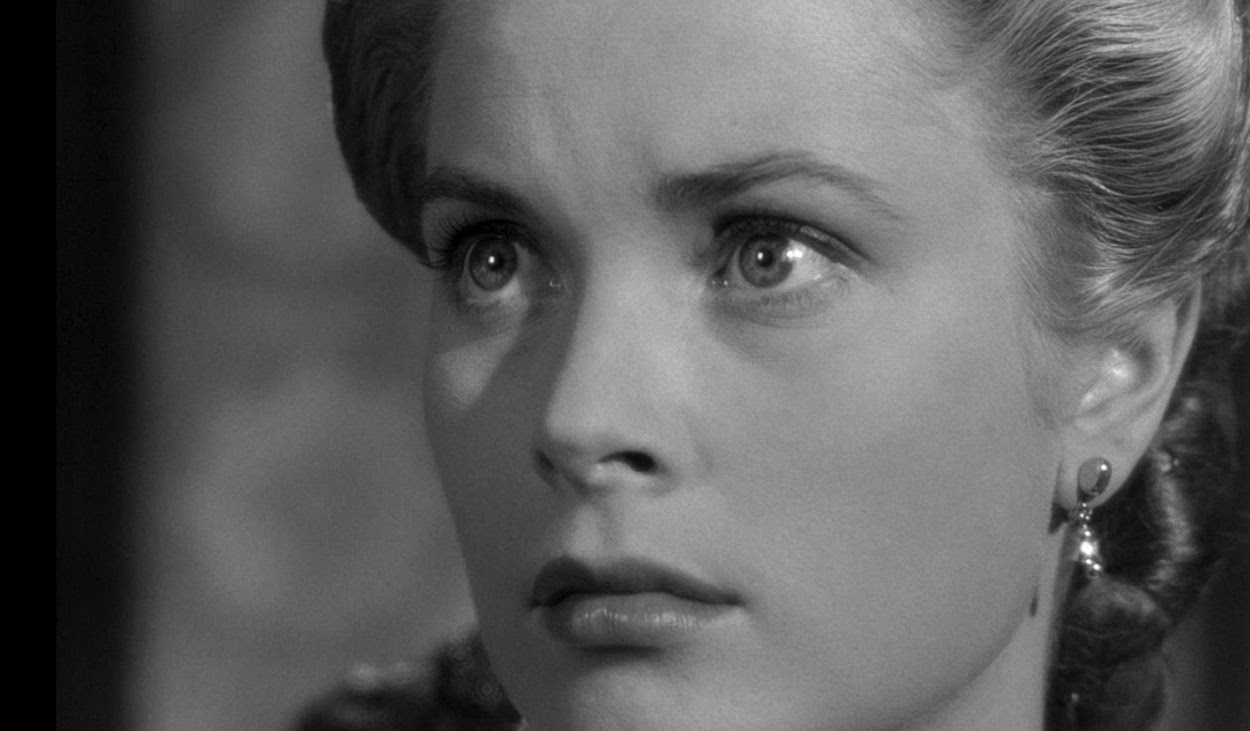 The lynchpin that really makes this film tick, though, is the character of Mrs. Ramirez, played wonderfully by Katy Jurado. A fierce individual in a conformist small town, she threatens to hijack the entire film. Jurado is magnetic. She is painted as a woman of ill-repute, and there are several eyebrows raised at her marital status; but as a woman of color on the outermost edges of White American Manifest Destiny, her reputation is tied more to her race than any sexual scandal. From her vantage point of a morally neutral observer, and watches the entire proceedings with a detached coldness. She is business partners with one of the town’s respectable citizens. She and Kane used to shack up. She is currently sleeping with Harvey Pell, Kane’s deputy (a young Lloyd Bridges, and don’t call him Shirley), There is an implied history between her and Frank Miller, something that Kane and Ramirez both acknowledge, but don’t really talk about. She will not help Kane, she is not afraid of Miller, she is disgusted with Pell, sees through Amy’s committal to non-violence, and profits off of her partner. In the end, she decides to leave because there is nothing here worth staying and fighting for.

High Noon was notable at the time of its release for unfolding in real time. A detail which surprisingly, seems less important to the film watching it now. The fact that the events unfold in approximately the same time it takes the film to unfold doesn’t particularly add to the suspense. It’s already a tightly wound piece of genre filmmaking, and its execution is fantastic. Fred Zinnemann moves the plot forward, jumping between the characters and locals with machine precision. The brilliant editing, by Elmo Williams and Harry Gerstad, keeps the momentum moving through the use of abrupt cuts and bold juxtapositions. The suspense comes from the waiting; from the editing; the cuts to the clock, the constant visual reminder of the inevitable countdown to Kane’s fate; his growing realization that he is utterly alone; in the decision to not reveal Frank Miller until the last possible moment when he steps off the train. The fact that these events occur over approximately an hour and twenty minutes don’t make the film any more suspenseful than if the events took place over a day, or a couple days. The ability to slow down or speed up time is one of the powers of cinema. Through editing, all time is malleable, even real-time. The effect of time is felt most acutely in cinema with the use of the long, uninterrupted shot, increasing suspense by holding on the image. Interestingly, High Noon does not rely on long takes, but rather those cuts and juxtapositions. Ultimately, the real-time structure is a clever, but extraneous gimmick. But with everything else working so well for High Noon the real-time gimmick doesn’t really detract from the film. 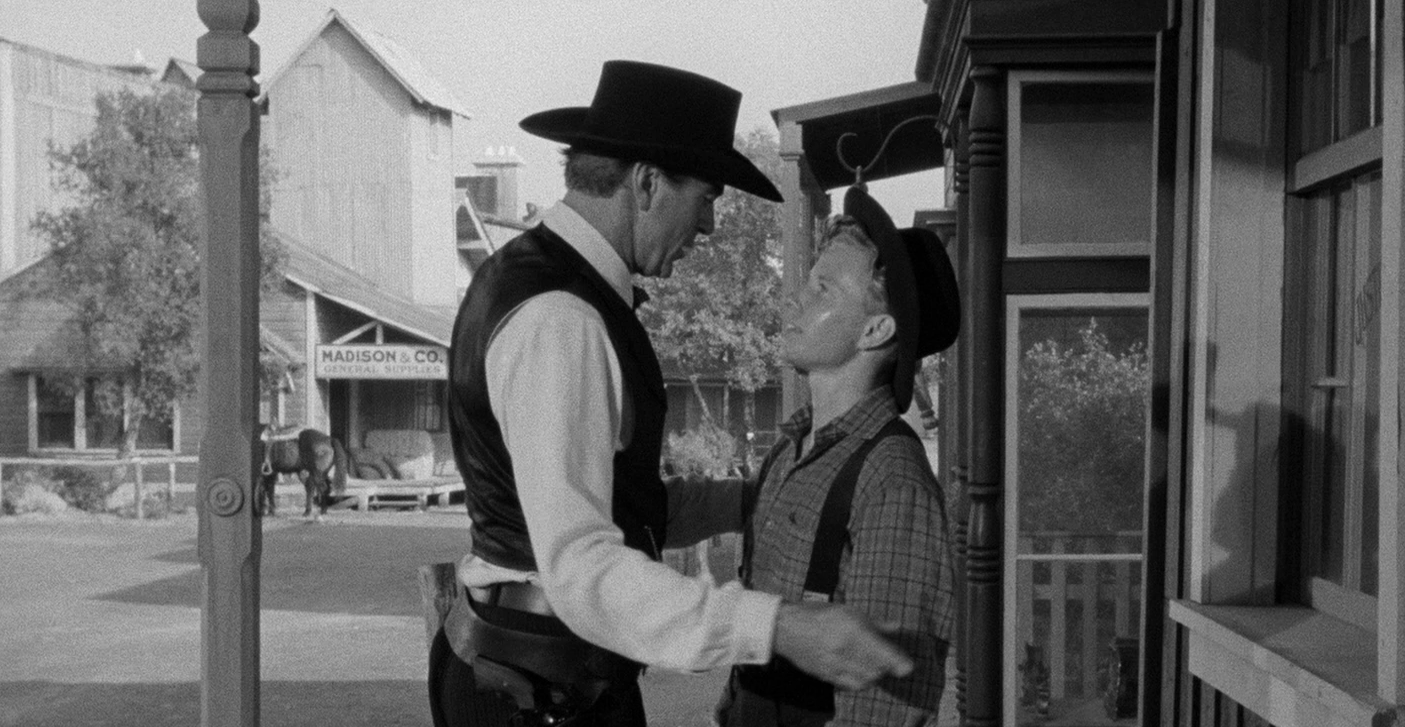 As for the picture quality on this new release from Olive Films; I have only ever seen High Noon on VHS tapes. Seeing it here in a 4K restoration is a revelation. Every wrinkle in every face; every bead of sweat are seen in remarkable clarity. You can almost feel the texture of the flannel shirts, and wood paneled walls. The black and white is crisp, rich and dynamic. The 35mm film stock is immaculately preserved down to the subtle grain of the film. And, with a supporting cast of classic Hollywood character actors like as Lon Chaney Jr., Thomas Mitchell, and Lee Van Cleef (his first on-screen role), Not to mention star Gary Cooper, There are a lot of rich, interesting faces on display here.