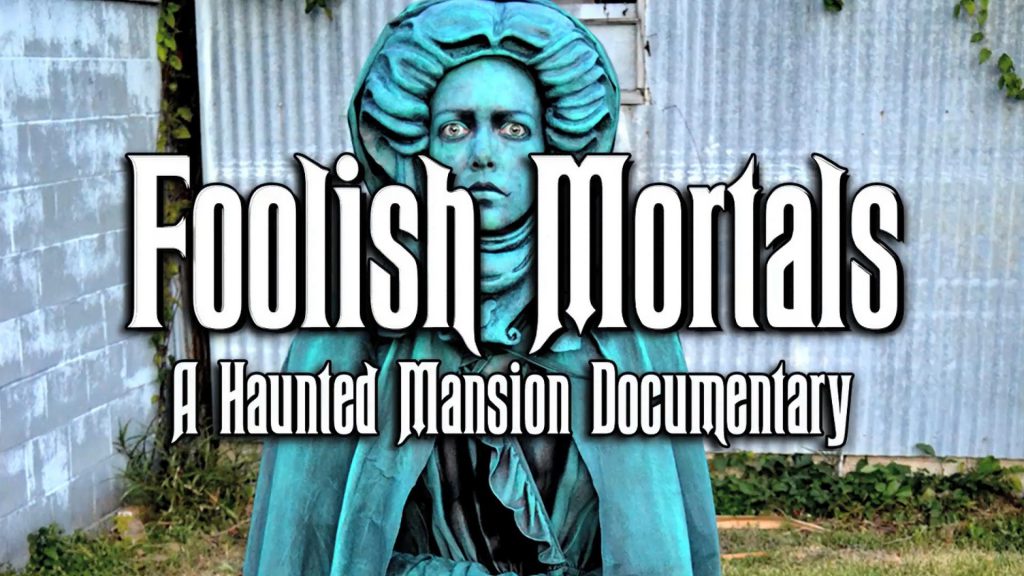 Foolish Mortals, produced by Spell Caster Media and directed by James H. Carter II, is a documentary collection of interviews with fans of the Haunted Mansion attraction at Disneyland in Anaheim, California.

There are a few big profile “gets” sprinkled throughout the film: Disney Legend Rolly Crump, former Imagineer and author of the Haunted Mansion book Jason Surrell as well as former Imagineer Terri Harden. “Big in the Fandom” gets such as Jeff Baham of Doombuggies.com and Bats Day in the Fun Park’s Noah K. Celebrity fans like Lance Henrikson (Pumpkinhead, Aliens, Terminator) and Dutch Bihary (Special effects guru and Skin Wars judge, appearing in this flick cosplaying as a Mad Max Guy Fiere),

A collection of creators make up the bulk of the rest of the interviewees: painters, photographers, web media makers, authors, filmmakers, animators, actors, effects make-up and visual effects artists and cosplayers. The roster is filled out by other fans and enthusiasts with stories to tell.

The fandom depicted in the film embrace the best parts of the attraction itself: whimsical darkness, fun gothic vibes, and “spoopy” imagination.

This is a documentary about a fandom so strong that people have had their ashes spread at the object of their enthusiasm: a fact I’m glad the documentary didn’t gloss over. We struggle today with the rise of “toxic fandoms” popping up all over but the Mansion fandom is the only one I know that takes this literally enough to become a biohazard.

Despite a brief condensed overview of creation and development of the Haunted Mansion at it’s unique tension of existence within the world of Disney, it’s not the focus on the documentary. If you are looking for that that I can’t recommend enough Jason Surrell’s great book The Haunted Mansion: Imagineering a Disney Classic that’s featured in the film. Jeff Baham and Bob Mclains’s The Unauthorized Story of Walt Disney’s Haunted Mansion was also in my wish list by the end of the flick now that it is on my radar.

This is about the fandom, the way people have latched on to the creepiness and darkness hiding in the corner of the “Happiest Place on Earth”.

However, if you haven’t experienced either exciting fandom in your own life? I’m not so sure this documentary will help you find it. In this way the film is limited: it’s more fan art than production art, it’s more personal than formal. The Disneyland Haunted Mansion is the primary focus, with barely a mention of the Disney World mansion and (unless I missed it) zero mention of any of the overseas mansions.

In the attraction itself the Seance Room represents a turning point for the ride: before Madame Leota’s incantation the ghosts, spooks, and ghouls are not visible to you the visitor. You can only see what they effect and move. After the seance all the residents of the Mansion becomes visible and fill every available space. In that way if you live your life “after the seance”, this documentary is going to appeal to you well because you can see everything they are talking about. But if you live your life before the seance? I’m not sure this film will bring it to life for you.

For the record, I’ve only been to Disney World, not Disneyland. In this way I may be biased by not having experience with “the original” and because of that the world of The Mansion will always take a back seat to the The Jungle Cruise/Adventurer’s Club world for me. However, I still consider myself “past the seance” and loved hearing the stories in this documentary.

This limitations evident in this film are clearly due to the legal and cost restrictions of dealing with the Mansion’s owner: The Walt Disney Company. These limits clearly prevented footage of the attraction itself, archived interviews of Walt, X, or any other Disney leadership talking about the mansion. It also prevents clips from the Eddie Murphy film, the Ron Howard record, or the events held at the mansion itself from properly appearing.

Near the end of the film there is a a singular fun and first-hand story of a former cast member telling about his job in the mansion. Another interviewee mentions they are a cast member, as well, to explain how the behind the scenes experience doesn’t ruin the magic for her. These brief breakthroughs seem carefully meted out in a way that makes you wish for more stories of those human beings who have haunted the mansion and walked countless miles on the doom buggy conveyor. Due to the employment agreements cast members operate under, we are lucky to have even these brief two interviews, unfortunately.

Once you understand how difficult these limitations are to navigate and how impossible of a copyright labyrinth working with Disney material is, you accept the parameters of the film that might otherwise be a turn off. Once you accept all the things the film can’t be, what it actually is becomes an even more enjoyable and celebratory experience.

My favorite part was how the flick manages to capture a unique aspect of the attraction that has gotten little attention elsewhere. For an attraction where even the central story itself is incomplete, unfinished, and hotly debated, the space left for fans to live into the gaps is huge. As Spookydan Walker points out in the film, this is part of what makes the fandom so engaging and enduring.

As my friend Steve is fond of saying, “You always project on a blank screen”; the magic of the Haunted Mansion is that there is enough to engage in itself but enough room where you put on it what you need it to be inside of it. In that way this movie works best: showing you people who have looked into the Haunted Mansion and when they did they saw themselves reflected back.

Interviewees tell stories about their parents, and grandparents and siblings, stories about their childhood and adolescence. Both good stories and traumatic stories emerge in the interviews with the Haunted Mansion as a central hub connecting them all. In this way the film artfully demonstrates that the Mansion is a “blank screen” that makes these stories as much of a part of the mansion as the Hitchhiking Ghosts. 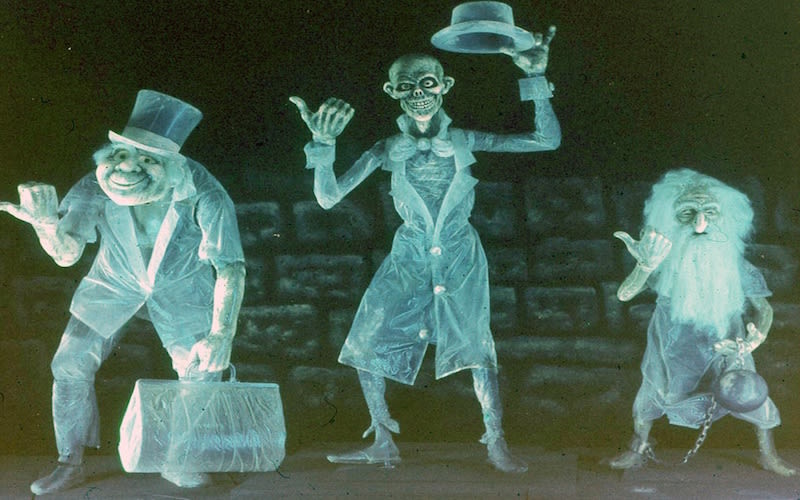 While all art forms are experiential, attractions are an art form that have a special claim on this nature. In an attraction you have to be physically moved through them, carried and present, 100% at the mercy of the experience. Capturing this aspect of the experience by including so many of these personal experiences within the film is it’s greatest strength. You are carried through their individual rides in how they talk about it, you are reminded that there truly is always “room for one more” in the Mansion.

Foolish Mortals is a must see for any Haunted Mansion fan, a good watch for any Disney parks fan, but for the rest of you a trip to the Mansion itself may be a prerequisite. If you take the chance to fall in love with the oddly dark ride in order to get you under Madame Leota’s spell then you can see what everyone in this film is talking about.

Foolish Mortals plays Sunday afternoon at 2pm at 7 Stages Theatre in Atlanta as part of this year’s Buried Alive Film Fest. A full fest schedule can be found at buriedalivefilmfest.com/schedule.