Australian film, Little Boy Blue, is a MASTERPIECE! Granted, clocking in at just under 30 minutes, it has more time to tell its story than most short films. The film takes place in 1950s rural Australia, and is filmed with all the brightness and color we tend to think of when romanticizing that era of time. It is no small feat to make a truly scary, creepy horror film that mostly takes place in broad daylight. Writer Will Faulkner and writer/director Nathan Keene weave together a story that is poignant, beautiful, terrifying, and disturbing. Nina Louise, as Eva, is an absolute treasure and really carries the film on her tiny little shoulders. She doesn’t look a day over eight years old, but tackles some heavy material with a focus and professionalism that is astounding!

The only fault I find with the film is that it opens with one of those explanatory written statements to let the audience know something that the audience would be able to figure out anyway, if they were paying attention. For whatever reason, the filmmakers felt the need to let us know that in the 1950s, circumcisions were occasionally botched and sometimes boys were raised as girls to compensate for their “shortcomings.” Then we see Eva, a beautiful blonde girl who looks like she could have been in a 50s family sitcom, playing tea party with her pet chicken. Eva proceeds to stab the chicken to death. Eva is obviously disturbed. All her dolls are missing their eyes. She is an unhappy girl who doesn’t speak much, and her parents worry about her a lot. 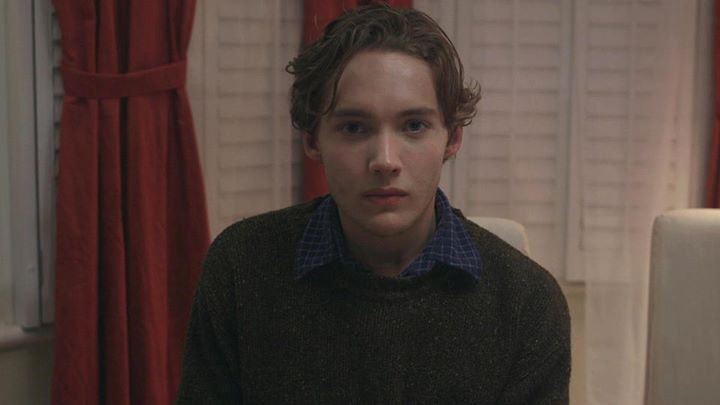 Eva makes a horrifying discovery at a neighbor’s farm, but doesn’t tell her parents. Little Boy Blue plays with fairy tale themes (think Grimm’s original uncensored fairy tales) and shows us that, for some children, monsters are very real and very human. There are hints of Hansel and Gretel, David and Goliath, with a bit of hero-rescuing-the-damsel-in-distress-from-the-evil-ogre story thrown in – except the gender roles are reversed. The movie also tackles some serious subjects, such as gender identity, gender norms, penis envy, and pedophilia. Some might say that Keene and Faulkner are trying to cram too much into this film, but it all worked as far as I am concerned. I have to give props to them for pushing the envelope with the subject matter they chose while keeping enough of the more disturbing elements off screen. They show enough so that the viewer knows what’s happening, but leave the rest up to the viewer’s imagination, which can be worse. One of the scenes involving a sexual assault on a child was painfully hard to watch and I am glad the filmmakers chose to focus the camera away from the actual assault, focusing on the face of the person witnessing it instead.

There are parts of Little Boy Blue that are visually and emotionally disturbing (putting it mildly), and it only gets more difficult as the movie progresses. I actually took a break in the middle of the film to catch my breath and brace myself for whatever was coming next. What makes the film work so well, even with the difficult subject matter, is the great cinematography, the pacing of the story, the incredible performance given by Nina Louise, and a truly satisfying ending. The last few minutes of the film are edge-of-your-seat intense. There are some truly scary moments in Little Boy Blue and an atmosphere that can’t often be created without an absence of light. A lot of horror movies have been promoted with statements like “You won’t believe the shocking ending!” Typically, that statement turned out to be all hype and no substance, but Little Boy Blue actually delivers a devastatingly shocking ending. I don’t know that they could even make this movie in the United States. The writing, directing, acting, sound, and cinematography are all of big box office quality, and I hope Keene and Faulkner eventually do a full-length feature.