Piper Laurie is probably best known for playing Carrie’s psycho mother in 1976’s classic Brian DePalma horror film. Her religious zealotry fucks up Sissy Spacek’s title character and then some. However, Margaret “Dirty Pillows” White isn’t Laurie’s only messed up matriarch role of the mid 70s. Just a year later she embodied the mother of all delusional moms as the titular role in Curtis Harrington’s Ruby. While not a Jesus Freak psycho, Laurie’s Ruby Claire is every bit as batshit crazy and every bit as much of an awful parent as ever before.

One may not be so inclined as to declare the film a “great” or even “very good” one, but it’s bizarre and interesting in that way that only 70s and 80s horror films could be. The Wikipedia synopsis reads:

In 1935, a lowlife mobster, Nicky Rocco, is betrayed and executed in the swampy backwoods as his pregnant gun-moll, Ruby Claire watches. He swears vengeance with his dying breath, and then she suddenly goes into labour. Sixteen years later in 1951, Ruby is now running a drive-in theatre in the backwoods near her home and employs some ex-mobsters. Her 16-year-old daughter, Leslie Claire, is mute and has been since birth.

Soon strange and bizarre accidents claim the lives of Ruby’s employees, then Leslie begins to show strange behaviour, and then begins to speak… in her dead father’s voice. Nicky Rocco possesses his daughter’s body and terrorizes Ruby with levitations, telekinesis, maniacal laughing and bizarre sexual aggression.

So, in summary, Ruby loses her mobster hubby, her daughter is mute and distant, she is tormented by her inner demons, and… then… everything ramps up when her dead lover possesses their daughter in order to torment her in much more literal fashion. Ruby is extremely nutty long before the possession, but her hubby’s ghost in their daughter’s body cranks that up crazy up to a full blown Spinal Tap 11. Shit gets pretty cray up in the Claire household! 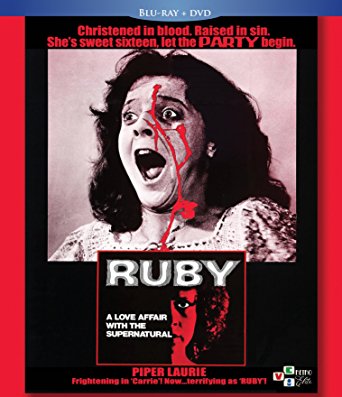 VCI’s Blu-ray looks pretty damn good and the price is right; at under $15, it’s a must-own Blu-ray. The package comes with a DVD too, so you can even watch it when stuck at Grandma’s house for the weekend – even though she refuses to get a new-fangled Blue disc thingy. A great last minute present for the horrorhound or cinephile in your life. And those not quite ready to pic up the Blu can snag the DVD for less than $10 or hop over to Fandor for a free month trial!