Gehenna: Where Death Lives is the first full-length feature from director Hiroshi Katagiri, who is primarily known for his masterful special makeup effects in movies ranging from Phantoms (1998) and Blade: Trinity (2005) to X-Men Origins: Wolverine (2009) and The Hunger Games (2012). Watching Katagiri’s entry into the survival horror genre, it is obvious that he learned a lot from the great directors he has worked with during his career as a makeup effects artist.

For those who are excited to see Doug Jones (The Shape of Water, Hellboy) and Lance Henriksen (Aliens, Pumpkinhead) get top billing on the movie poster, be warned: Henricksen merely has a cameo at the beginning of the movie and Jones makes a brief, but memorable, appearance in the film. It might feel like manipulation on the director’s part, but if you were making your first feature film and had worked with horror film royalty, wouldn’t you call in a couple of favors?

The first part of the film takes place on the beautiful beaches of Saipan, which serve to create a dramatic contrast with where the rest of the film takes place. The beginning plot of the movie involves a white real estate developer trying to sell a large piece of beachfront property to a group that is interested in building an upscale resort there. Between the historical background given about the island’s history of occupation by Spain, Japan, and then the United States, and the “white people buying native land from other white people” plot, it is easy to assume Katagiri is attempting to make a statement and not just making a scary movie for shits and giggles. In fact, it seems that Katagiri is trying to atone for his native country’s past crimes by violently punishing the Japanese characters seen in flashback sequences. However, he is also taking the United States for the same ride and saying “You were pretty shitty to this island too.”

Fittingly, the primary theme revealed as the horror ensues is “secret sins exposed and rightly punished.” There is a saying in the Bible that says, “Be sure your sins will find you out,” or in some translations “catch up with you,” and that is exactly the “message” of Gehenna: Where Death Lives. However, one of the films biggest flaws is that it does not spend adequate time showing the sins of each character, with the exception of Eva Swan’s character. 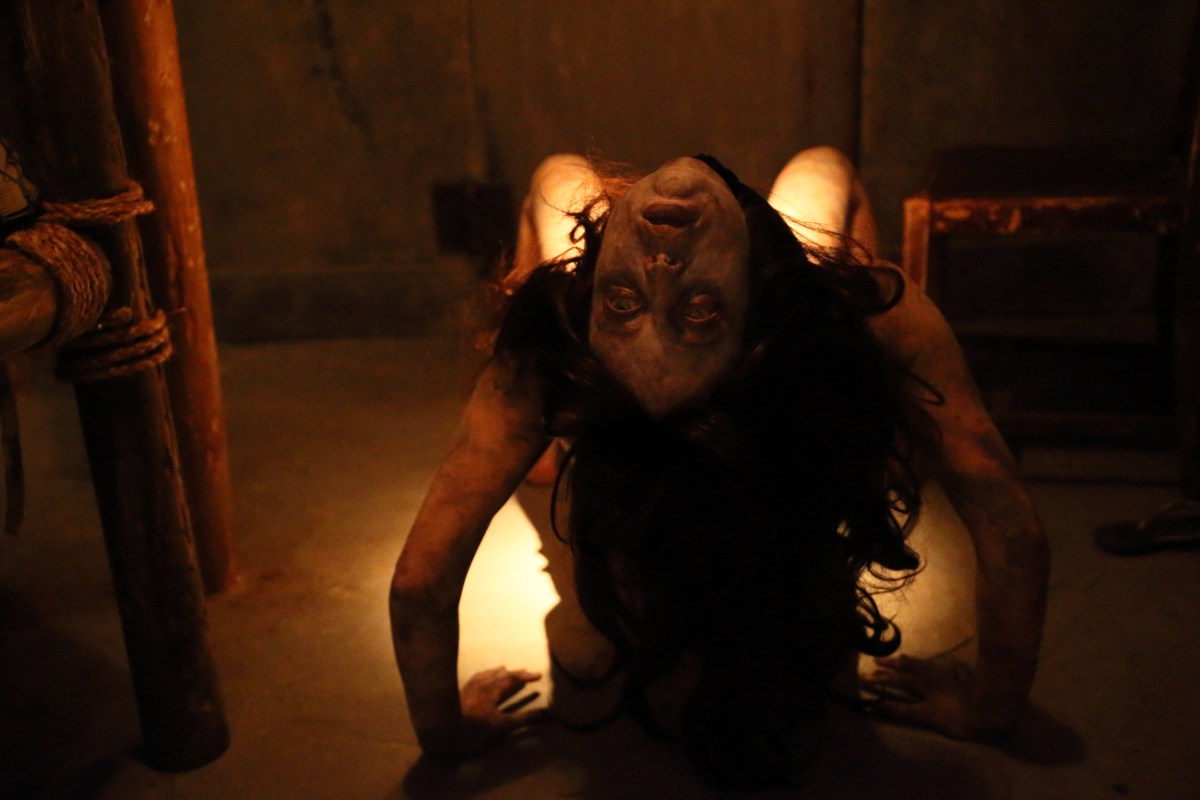 The pacing of Gehenna: Where Death Lives is fantastic for the first hour or so. The movie begins with an intriguing scene that lets the viewer know this is undoubtedly a horror film. There are a few minutes spent introducing the characters and setting up the story, but then the horror action commences. The makeup effects are spectacular, which of course they should be given who the director is. The highlights of the makeup effects include Doug Jones as “creepy old man,” an old native man with some seriously messed up eyes and teeth, and some terrifying visuals reminiscent of Japanese horror films such as Ringu and Ju-On. While short on actual scares (there are a handful of jump scares), the movie is high on tension, claustrophobic dread, and palpable creepiness. There are some truly hideous scenes, enhanced by Katagiri’s makeup effects.

As the main characters find themselves trapped in an underground bunker that has apparently been sealed since World War II, everything unravels for them, even their sense of time. As they encounter the emaciated bodies of Japanese soldiers, they begin to wonder if they have entered a portal in time. No, this does not take the film into science fiction territory, but it does effectively add to the growing paranoia of the characters. As with most stories involving survival horror (see The Walking Dead, Lost, etc.) the characters begin to turn on each other. Like The Walking Dead, where the characters find themselves fighting both zombies and each other, the characters in Gehenna: Where Death Lives are trying to survive attacks from Japanese ghosts, native curses and each other.

The performances of the actors are strong and believable, which is both unusual and refreshing for a film made on a low budget by a first-time feature director. Sean Sprawling as Saipan native Pepe, steals the show and adds some much-needed comic relief, but is also able to bring intensity to the horror scenes involving his character. Simon Phillips as Alan, a greedy, sociopathic real estate man who is abusive and racist to native Pepe, makes a convincing villain. Justin Gordon and newcomer Matthew Edward Hegstrom both create likable and believable characters. Eva Swan, whose character Paulina is the only one with a fully fleshed out “sin story” turns in a solid performance as well.

The biggest weakness in Gehenna: Where Death Lives is that the pacing falls apart during the second half of the film, which is when a horror movie really should be stepping up its game, building in tension and leading to a dramatic and memorable finish. Unfortunately, the film gets too talky and slow, focusing more on conversation than action. For the first half of the film, I was on the edge of my seat, as amazing makeup effects, some genuine scares, and unexpected twists kept me on the edge of my seat. I think the writers put too much of the action at the beginning and ran out of ideas as they got nearer to the end of the script. Editing could have helped with this problem, by paring the movie down from 103 minutes to about ninety. Instead of feeling more invested in the movie as the end approached, I instead found myself bored and just wanting the movie to end. The talky, slower scenes would have worked fine if those scenes had been used to give the viewer insight into the terrible acts the characters had committed to deserve the judgment they were receiving in the bunker. But Paulina’s is the only full story we are given, while the other characters’ sins are revealed through short, nightmarish flashbacks and ghostly appearances of the people they sinned against.

Despite the somewhat backward pacing of the film, Gehenna: Where Death Lives is still a horror film worth watching. The special effects makeup and claustrophobic setting, combined with the interweaving of historical and anthropological elements, supernatural horror, personal demons and survival themes make it an original and compelling film. If this is what Hiroshi Katagiri has managed to accomplish with his first film, I can’t wait to see what he does with his next.