If there is one genre of film that, at least in my eyes, that tends to age rather poorly over time, that is comedies. Whether it be out of date pop culture references, jokes that were once funny and smart, now cringy or mean-spirited, or simply a tone and style that squarely pegs it into a specific period of time, comedies rarely enjoy long life spans in my overall collective outside of a few timeless examples (The Blues Brothers comes immediately to mind). Another such example is the trilogy of films from director Edgar Wright that have been since dubbed “The Cornetto Trilogy”, named that due to the famous British ice cream treat popping up in all three films. The series consists of Shaun of the Dead from 2004, a zombie comedy with deep love for Romero with a dash of dry hilarious British humor, and The World’s End from 2013, revolving around a group of friends attempting to complete an incomplete bar crawl from their youth that also happens to involve aliens and robotic duplicates. The third film, the middle entry of the Cornetto Trilogy, however, is far and away the best of the lot and has grown to become one of my most watched and quoted movies of all time. It’s a brilliant action film that instills Wright’s dry and hilarious comedic elements throughout while making fun of the genre that it clearly loves, all with a dash of horror movie elements to top it off. Allow me to submit this entry into the 20 for 20 series on Farsighted, the action comedy that will never feel dated, unfunny or old in these adoring eyes, Edgar Wright’s 2007 masterpiece Hot Fuzz.

Sergeant Nicholas Angel (Simon Pegg – Mission: Impossible III/Ghost Protocol/Fallout/Rogue Nation) is the glowing example of what a police officer in London can be. He has numerous accommodation and citations that span his many star-studded years as one of England’s finest. Unfortunately, his excellence is apparently making everyone else on the force look bad. So, his higher-ups end up transferring Angel and his unique set of skills to the calm and quaint village of Sandford, a small town that has been winning the Best Village moniker year after year with relative ease. As he settles into the town, and is paired with PC Danny Butterman (Nick Frost – Attack the Block), the generally inept, action movie obsessed son of the Chief Inspector of Sandford, Angel is unable to tune down his aggressive need to uphold the law at any cost (including his personal life), believing there is always a crime being committed. He immediately begins to think something is afoot with a rash of deaths scattered around town that are being called accidents and dismissed away. Are the constant danger and life threatening situations that Sgt Angel was used to in London getting the best of his judgment in a town that is known for not having crime of any sort, or is there truly something wrong with the seemingly ordinary and peaceful existence of this beautiful country village? 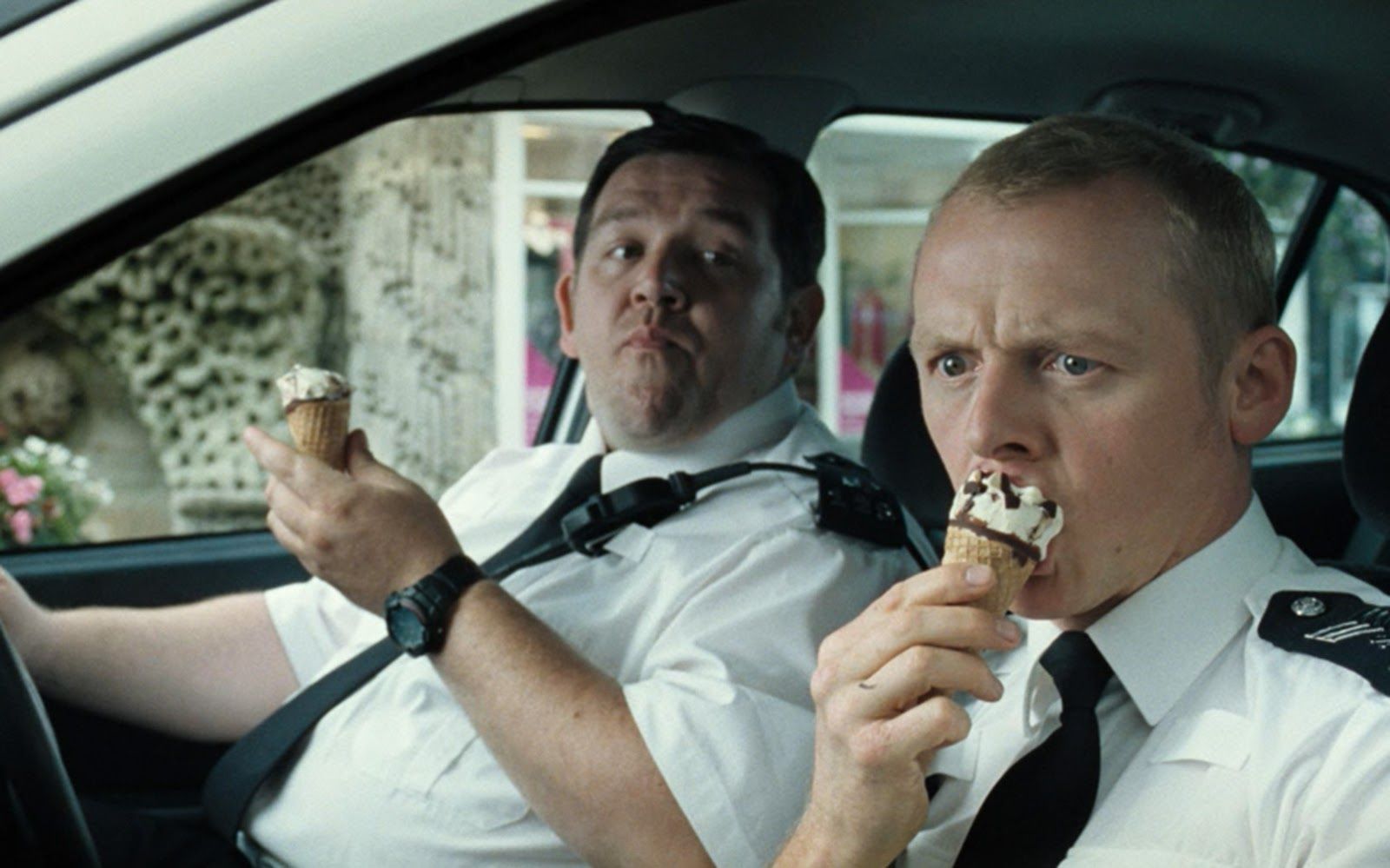 Hot Fuzz is the quintessential example of how to pay homage to a particular genre of film (in this case, the epic action genre) with well written humor, clever references and characters that play into the genre while respecting it at the same time, and actually delivering material that would make the genre proud. Hot Fuzz works as a hilarious comedy, a thrilling police drama of a cop that is clearly unable to adjust from the constant crime of London to the practically comatose town of Sandford, an over-the-top action extravaganza with multiple set pieces that are well shot and performed, and even a dash of horror with the infusion of a cloaked figure committing murders all around town. Writer-Director Edgar Wright and co-writer Simon Pegg assemble a menagerie of brilliant sequences that are all shining examples in whatever genre they happen to be invoking at the time. However, none of this movie would work without the amazing ensemble that is gathered throughout. Pegg and Frost continue their great chemistry from Shaun of the Dead and build even further upon it, establishing Frost’s Danny as a great yang to Angel’s ying, with both improving the other as human beings along the way. Jim Broadbent is a shining example of cheery good nature and laxed enforcement as the Chief Inspector of the safest village in the country. Paddy Considine (HBO’s The Outsider) and Rafe Spall (Black Mirror) are the smug and conceded detectives who enjoy that their life is filled with drinking and general nothingness. The townsfolk of Sandford exhibit the wholesome charm you expect from occupants of a quaint village, but all seem to truly have something dark and mysterious lurking beneath the veneer. These locals are brought to life by seasoned veterans such as Stuart Wilson (Lethal Weapon 3), Edward Woodward (of The Wicker Man ’73 fame) and a fucking bonkers Timothy Dalton (James Bond himself from License to Kill, The Living Daylights, etc.) in one of the best performances he has ever given as the suspicious local supermarket owner Simon Skinner. We even get a pre-The Favourite comedic turn from Academy Award winner Olivia Coleman as the only woman police officer on the Sandford PD, who delivers some true highlight zingers along the way (“Nothing like a little girl on girl, eh?” after she cracks a threatening antagonist in the face with a wet floor sign).

The script by Pegg and Wright is the real showpiece of this grand epic. Every line of dialogue uttered in this film seems to have a second meaning underneath it all, rife with sly underlying purposes, alluding to evil intentions or greatly exaggerated to exhibit suspicion without anything to truly support the notion. Even some of the local Sandford resident names are references to a method of death, such as James Reaper, Peter Staker and Simon Skinner. Every single minute of this movie is meticulously detailed, planned out ahead of time with great pain and precision to deliver a movie that is constantly sending up the genres that are at play while simultaneously paying loving respect to the genre itself (Danny Butterman’s obsession with Point Break and Bad Boys 2 are hilarious and point to where the film will ultimately end up building towards). Even though this movie is essentially a send-up of action movies and their absurdity, the action set pieces themselves are quite thrilling and fun, showing that while they clearly understand these movies are insane and ridiculous, they recognize their inherent popularity and end up delivering their own set of action sequences. No one is playing it ham-fisted but no one is playing it straight razor either. Every single performance is believable while still absurd, honest and sincere while still exhibiting playfulness. Even the horror elements that are instilled throughout are done with loving adoration, as Wright and Pegg exhibited with Shaun of the Dead. The cloaked figure, who pops up from time to time, and dispatches another resident or two in a grandiose and bloody fashion are some of the more gleefully fun moments of the movie and compliment the action and comedic scenes very well.

If you can’t tell from my bloated, fanboy incoherence of the previous two paragraphs, I truly consider Hot Fuzzto be one of the best comedies I’ve ever seen, in addition to being a completely serviceable action movie with brilliantly shot car chases and gun fights littered throughout, and a few crazy horror infused murder sequences sprinkled in for good measure. There is not a single false note hit in its entire two-hour running time, which never feels long or drawn out in any regard. Every line, action, sequence, character look and music choice is spot on, carried out with such care and purpose, it’s simply not fair to any comedy-action movie that came before or released after. If you still need convincing, just read this exchange between Sgt Angel when he (and we) first meet Simon Skinner:

Simon Skinner: Lock me up

Simon Skinner: I’m a slasher! I must be stopped!

Nicholas Angel: You’re a what?

Simon Skinner: I’m a slasher……of prices! I’m Simon Skinner. I run the local supermarche. Drop in and see me sometime. My discounts are criminal. (As he begins to drift away running) Catch me later!

Honestly, ‘nuff said. Hot Fuzz is the best comedy of the last 20 years. You can quote me on that.