There has always been horror in the world of video game. Even back during the days of gaming in the early 80s, the Atari 2600 got adaptations of such movies as The Texas Chainsaw Massacre and Halloween. Yes, these were not scary in the least and didn’t evoke the same terror as their celluloid brethren. As generations of gaming progressed, we got titles like Sweet Home on the NES and Splatterhouse franchise on the TurboGrafx16 and Genesis, which attempted to bring in the horror crowd with grotesque monsters and bloody violence, but the technology was still just not quite there to fully immerse the player in a world of horror (thought I will be addressing some of these titles in future articles that still do enough to earn a spot as one of the scariest moments in gaming). Then came along the introduction of 3D gaming from the following generation of video game systems. The front runner of this revolution was Sony’s Playstation, launching across the world in 1995. Now developers could create worlds within three dimensions to help them become fully realized environments, as opposed to the strictly two-dimensional adventures we were used to during the 16-bit era of Sega Genesis and Super Nintendo. Could horror games finally become what us horror movie nerds always hoped for, developing the ability to fully immerse the player in terror and constant fear? That question was answered within the first five minutes of playing Capcom’s now horror icon classic, Resident Evil from 1996, by way of two individual moments that clearly showed the world what horror gaming was about to become and are truly two of the scariest moments in gaming.

The moments I speak of happen right as you begin your adventure. Jill Valentine, our main character (you can play as either Jill or Chris, but for this article, assume we choose her as our avatar) starts off in the main entrance of a grand, ornate mansion that resides within the Arklay Mountains, a region that borders the small Midwestern town of Raccoon City. You are a member of the S.T.A.R.S Alpha Team, which is an elite task force working within the Raccoon City Police Department. You and the rest of your squad were just chased by ravenous dogs into this sprawling manor, and you are amazed and frightened by the sheer size of this domicile. Then you hear a gunshot in the distance. Jill and Barry Burton, your reliable partner who has a thing for weaponry, move to the dining room to investigate, leaving team leader Albert Wesker to secure the main hall. As Barry checks out some blood near the fireplace, you move to the hallway next to the dining room. As you turn a corner, the game shifts into a pre-rendered cinematic. Some sort of man is crouched over in front of a couch, gnawing and feasting on something on the floor. Suddenly, a loud crunch happens, and we the decapitated head of one of your fellow S.T.A.R.S Bravo Team members, Kenneth, rolls to the left. Then it happens, moment #1. Pure chills go down your spine as the creature slowly turns its head to the left and glance over its shoulder. The thing that killed your friend is a bloodthirsty zombie. After you or Barry take care of the undead individual (depends on if you run back to the dining room or not) and retreat to the main hall, you discover that Wesker is now gone. After a brief scan of the area, you and Barry decide to split up and search the house separately, covering more ground in a shorter time period. Jill makes her way to the right of the main hall, coming into a L-shaped hallway that leads to around the back of the house. As you make your way down the hall, a moment that will forever be seared into my brain occurs, which is moment #2. A dog leaps through a window you just passed and begins to pursue you down the hallway. Then, as you make your way to the door on the other side, a second dog jumps through another window, scaring you to death as you hopefully make it to the door unharmed. 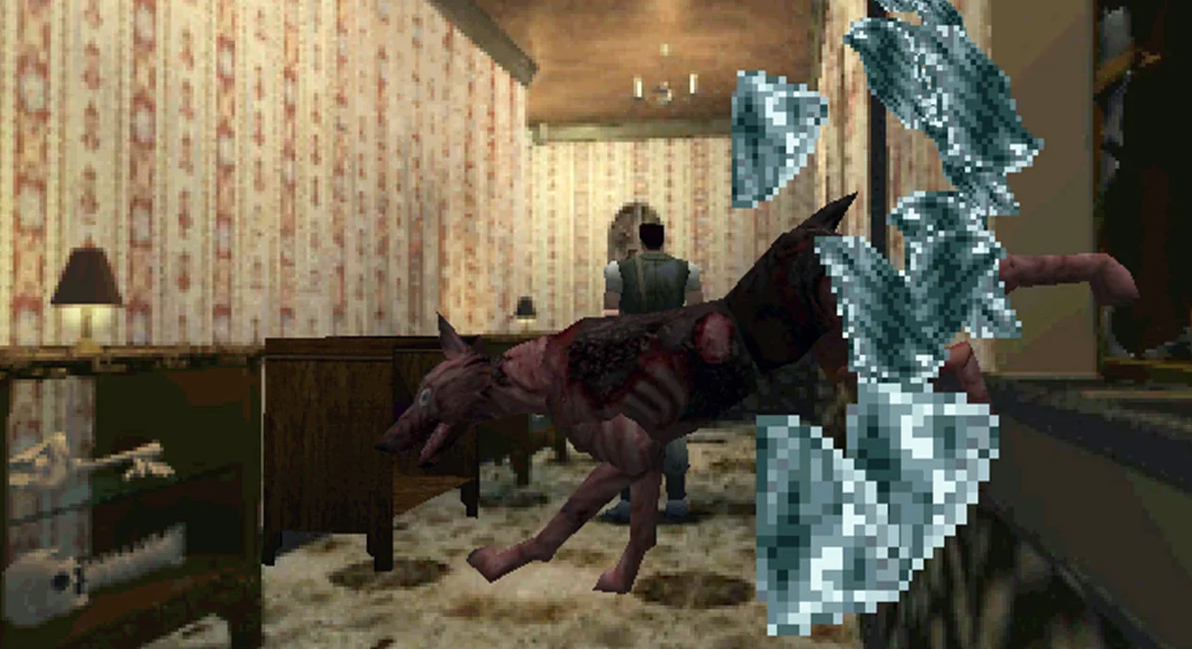 Why are these two moments considered by me to be some of the scariest moments in gaming? It all has to do with timing. These fully three-dimensional worlds didn’t exist before the introduction of 32-bit era and game experiences such as Resident Evil, and the ability to craft fully textual worlds was now a reality. The ability to surround the player on all sides with dread, uncertainty and frights was something gamers weren’t used to, and Resident Evil director Shinji Mikami and his team made sure to exploit this in every way. The moment that the first zombie in the game turns to face you, in a pre-rendered cinematic with orchestral music to really pull you in, you realize that horror in gaming was never going to be the same after this. Then, immediately after that, you get what could honestly be one of the first jump scares in horror video games, the dogs leaping through the windows, a wake-up call that this brave new world of horror gaming was not going to be fucking around, and they were going to take every chance they get to make you wet your pants and cause you massive amounts of stress sweats. Resident Evil is considered the game that introduced us to the video game genre of “survival horror”, and within these first few minutes, and the subsequent hours that would follow, it was clear why this game got labeled as such. The need to survive within this world of terror was quite visceral and horror had found a new form of media to sink its teeth into, scaring a whole new generation of humans. There was no escape. A collective muttering of “We’re in!” echoed throughout the horror community.