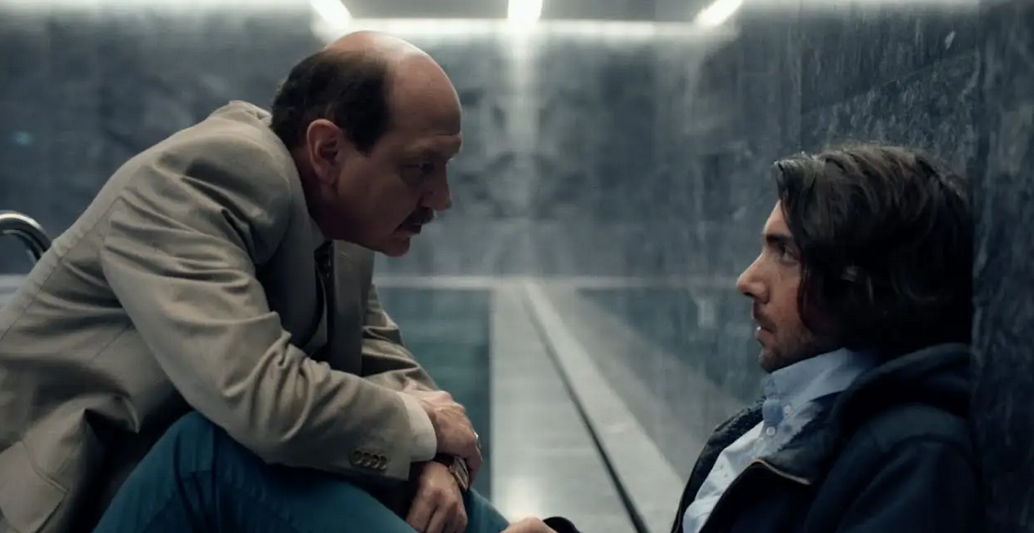 Opening on the confession tape of a bloody man, we are introduced to Alkis who is laying out a murder conspiracy to a camera. It is then revealed that a whole film crew is there and that in fact the blood is fake. The film crew leaves with the footage and suddenly, Alkis becomes very panicked and informs that he will be killed and that so will others. Suddenly a mob boss and lawyer enter the room. They reassure of a man named Daniels’ impending release and Alkis once again re-attempts escape. He calls a hitman for help and is then promptly off sneaking around the building looking for exits to reveal that this is one of the largest porn studios in the world. In an odd way it suddenly feels like Die Hard but Nakatomi Plaza is owned by pornographers and there’s no Christmas party, just a sudden mafia dispute that has many a web to spin. Alkis finds his tape and its revealed that he was being played for another’s intentions, only Alkis reveals that he had his own intentions as well for the tape and then of course the man who set him up held his own intentions and his partner had other other intentions. A very long and convoluted scheme of rotating bad guys revolves around this video tape and would ultimately feel like bad writing if it weren’t for the truth of the events.

But this is where Tsilifonis really shows his stuff. With his kinetic camera work, there’s an energy that keeps the action at pace and makes good use of confining us in rooms to feel the trappings of Alkis. There’s some very interesting effects in the earlier half that shows us more of the character’s mind playing out on screen such as reading lips as words on a wall or the schematics of a window he has to disassemble. Along with his use of voice over, there’s a great effort in getting us into the characters head. This works as an engaging effect but like any movie with a complicated plot there are several roadblocks of flashback and exposition that snap us out of the intensity for the sake of plot points before the story can continue. It’s a difficult thing to address but Tsilifonis manages to put it all together at a pace that doesn’t feel like too much of a spin out from the story.