First, let me say that despite my Cleveland hardcore roots, I haven’t followed Integrity’s 30 year career very closely – but they do hold a special place in my heart being one of the bands that built my scene as a teen. I first saw Integrity in the early 90s and their brutal mix of metal and hardcore was what Cleveland became known for. I still remember going to see them play shows at places like Peabody’s and fearing to go into the pit. As I moved on from the shores of Lake Erie, so did Integrity, becoming a legendary band known for their heavy pummeling sounds, I lost track of them. 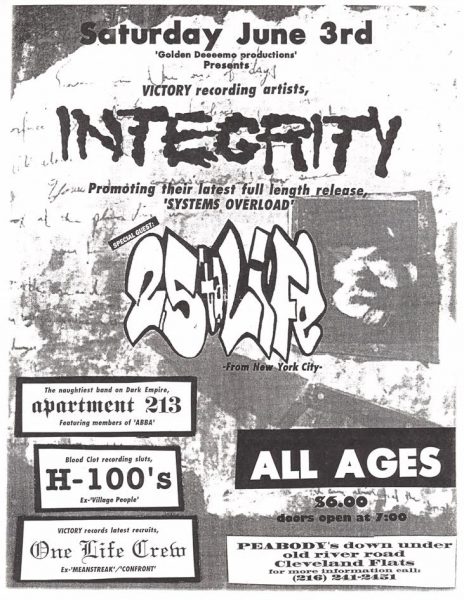 This live digital release is 20 songs spanning the three decades since 1995’s System Overload to 2019’s Den of Iniquity. The recording is great for a live album of this sort, which often are bad quality or just mixed terribly. This is very well put together, clocking in at just under an hour, it’s a real treat for diehard fans.

For someone like myself, a casual fan at best, hearing this live assault on my eardrums takes me back to those early days, before Victory or Relapse were putting out their albums. When it was just a bunch of angry teens beating the shit out of each other in dive bars and VFW halls all over the greater Cleveland area. I can almost smell the sweat and feel the heat coming off this release. Even though I’m not familiar with the songs, I’m quite well versed in the energy of the live experience and this record has captured that perfectly.