In previous entries into Gaming’s Scariest Moments, the main hook that seemed to connect them all was that they all involved some outside force threatening their very existence. Zombies, vicious dogs, spectral entities, mutated children, hordes of fast-moving infected humans. Each one involving the self-preservation from something or someone trying to feverishly extinguish the light from your eyes. However, not all threats, tension and pure horror come from things that are outside of our own person. What if the true horror was something you had complete control over, something that would only take a matter of moments but could easily swing from success to utter failure based on your actions? What if I told you the moment involved you lowering a massive needle into your eye, all while you, the player, are in complete control of the needle itself? On top of that, what if these few moments were also amped up by the presence of vicious, multi-limbed creatures called Necromorphs, who are always one jump scare away from tearing your body limb from limb AND the pursuit of preventing these creatures and the object behind their creation from spreading across the galaxy? This is the moment I will speak of today. While this scene only lasts a matter of minutes, the intense pressure that permeates from it has lasted within my brain for the last nine years. Folks, allow me to introduce you to the Eye Surgery scene in 2011’s space horror epic Dead Space 2, released on the Playstation 3, XBOX 360, and PC. 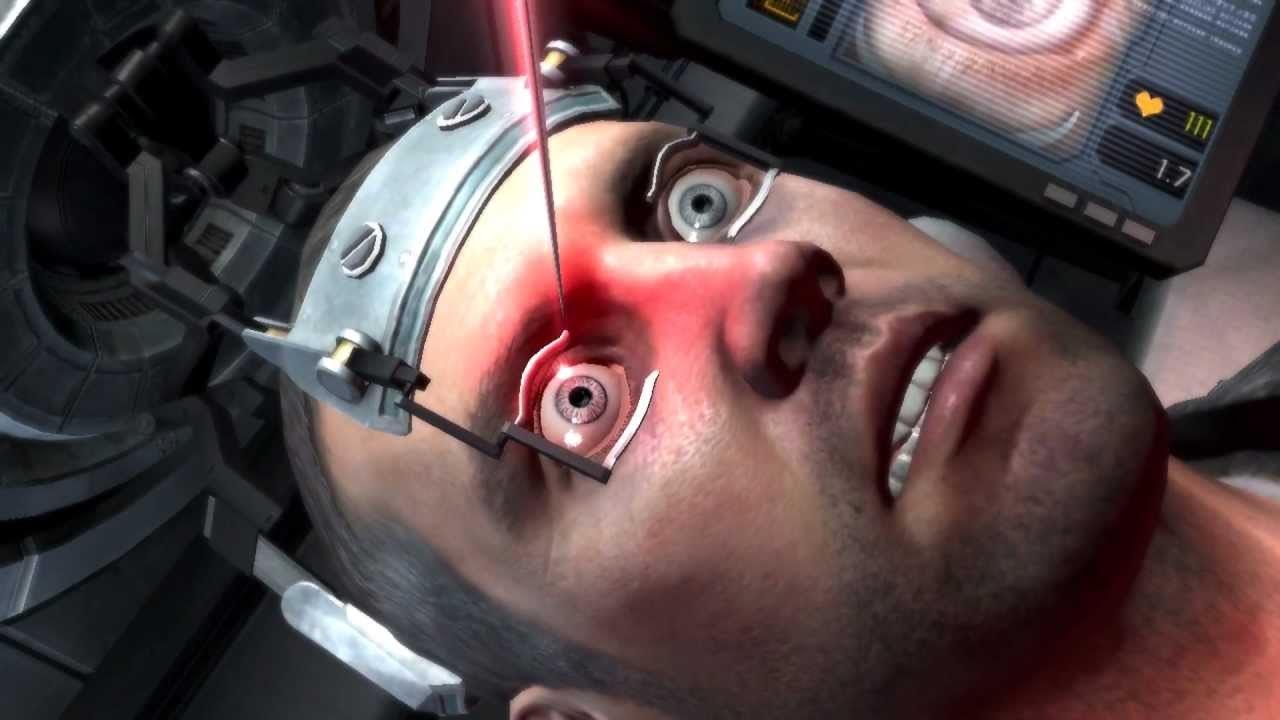 Dead Space is a three-game franchise that released across a single console generation of the PS3 and XB360. The overall story has us following space engineer Isaac Clarke. After the mining ship USG Ishimura uncovers an ancient alien artifact on a distant planet, Isaac and his team are called in to lend assistance to the spacecraft, getting it back in functioning order for travel and deciphering what happened to cause the ship to lose contact with civilization. I will refrain from going into any more details to avoid spoilers on this excellent franchise (outside of the necessary info I need to provide to discuss the topic of this article) but suffice to say that Isaac will embark on a horrific adventure to battle hideous mutated monsters and creatures that are created from this ancient relic, called the Marker, and attempt to save the galaxy from its clutches while also dealing with the effects on his sanity that the Marker is causing. The first two Dead Space games are some of the scariest and most tense affairs I have ever played, and it’s a real shame that EA more or less decided to throw that away with the more action-oriented, co-op play of the completely forgettable Dead Space 3, which for all intents and purposes, killed the franchise.

The infamous Eye Surgery scene occurs well into your adventures during Dead Space 2. The machine that Isaac needs to operate for this sequence is called the NoonTech Diagnostic Machine. As you learn in the beginning of DS2, the device was used by the science department aboard the Titan Station to extract the memories and information about the previous marker that existed in DS1 and facilitate the creation of their own marker. Later in the game, Isaac learns that he needs access to his memories to finally decipher a way to destroy this latest iteration of the Marker, for which he will need to use the machine. Since he is running solo on this mission, he will also have to operate the machine needle himself. The basic gameplay of the machine is that you will manually lower the needle towards Isaac’s cornea, slow and steady. The machine also tracks Isaac’s heartbeat and if it rises constantly and reaches over a certain threshold, Isaac will lose control of the needle. At that point, it’s best to retract and start again before it’s too late. Once the needle is successfully pierced into his eye, you need to maintain the steadiness as the needle plunges further and extracts the data. Once complete, the needle retracts and the scene ends. In all of my gaming memories, I have truly never been so terrified, full of sweat, nervous, anxious and scared in my life. What amounts to a two to three-minute scene is packed with an incredible amount of tension through a variety of methods utilized. The camera sits in a close-up shot of Isaac’s head, tilted to the left. You are locked in this camera angle as you lower the needle toward Isaac’s eye, all while maintaining the speed at which you drop and the heart rate of Isaac himself. The camera even begins to slowly zoom in on his face as the needle draws ever closer. The tension is beyond comprehension. What if I go too fast, too slow, jerk to the left or right? My lingering fear of needles only adds to the palpable tension that is present and it stands out as a testament to the game design that in a game loaded with gore, scares and brutal monsters, a needle piercing scene is the one that seems to have lodged in my brain the most. If you happen to fail on this part (and you will, as I did), the end result looks something like the photo below – the entire contraption just SLAMS into your face: 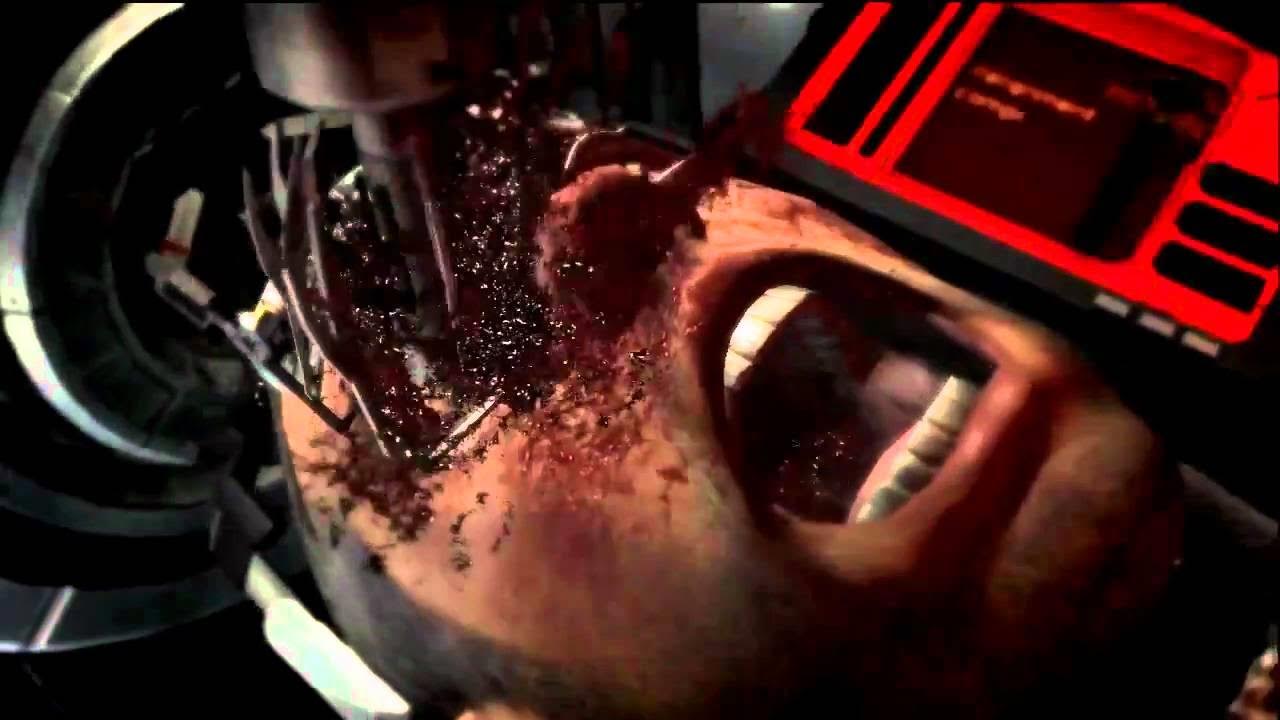 The original Dead Space and it’s follow-up Dead Space 2 are prime examples of a new voice of horror rising to the occasion during the PS3/XB360 era, a time when Resident Evil and Silent Hill were either releasing subpar entries or moving away from their horror roots and shifting to a more action-oriented play style. The Necromorphs are an amazing monster to fight, with a good variety to their appearance and an overall AI that makes every encounter challenging. The Plasma Cutter, the standard weapon from the DS series, is a marvel of precise mayhem, allowing you to shoot off the limbs of these monsters with great precision and ease, leaving heaps of chunky grossness all over the floor. However, if I had to choose one scene or location that has stuck with me over the years as one of the most harrowing and disturbing, I always go back to this creature-less sequence that lasts only a few minutes. This is tension at its most high, fear of death as its apex, and a commanding sense of controlling the fate of your character. I can shoot Necromorphs to pieces all day, but please don’t ask me to lower a needle into my eye ever again… I mean it.