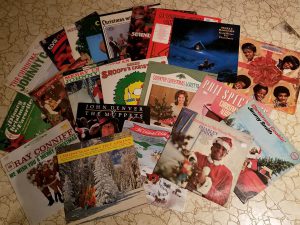 There is quite the variety of opinions and feelings on Christmas/Holiday music. Some people love it all year round while others refuse to listen until December…some just hate it all together. There are those who love the traditional carols and hate the modern songs and there are those who prefer the “classics” they grew up with. I’m definitely in that latter group.

Growing up, my parents had a handful of Christmas records… including a couple I didn’t associate specifically with the Holiday and would listen to throughout the year. In the 90s some of my favorite Christian rock artists put out some more modern takes on the carols and classics of the… and I enjoyed some of them. But this mixtape focuses on the classics… those I grew up with and some I’ve discovered in more recent years. Everything I’ve included comes from my vinyl collection… in fact you can hear the pops and crackle of those old scratched records…and most of it predates the 80s (with a couple exceptions…but one of them is a retro sounding cover of a classic from the 60s and the other was written and performed to intentionally sound like oldies rock and roll). 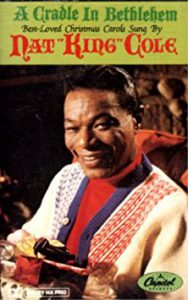 Things start off with an epic Hammond Organ romp by jazz organist Jimmy Smith. In recent years, I’ve come to really appreciate jazz for Christmas… although I don’t really listen to it at any other time. I think it all started when I purchased the soundtrack to A Charlie Brown Christmas (sadly missing from my vinyl collection and so not represented here in this mixtape) on CD several years back. There was just something about Vince Guaraldi’s piano tinkling and the way the trio took on those holiday tunes that made me want to pursue more of that kind of jazzy seasonal bliss. So over a few years, I ebayed some Christmas Jazz compilations as well as albums by artists like Smith and the Ramsey Lewis Trio.

Something else I only listen to at Christmas time, is the classic crooners/big band singers. It seems to me that the one thing their voices and styles are best suited for, is belting out the traditional hymns and especially their suave treatment of the 20th Century holiday songs that have become standards over the years. But I did try to stay away from the songs we most typically hear from the likes of Andy Williams and Nat King Cole and instead chose songs that I love just as much and hopefully won’t get sick of during the next month.

In more recent decades, we’ve come to recognize a number of records from the ‘oldies-rock-and-roll’ era to be just as classic as the crooners of the 40s and 50s. And here I’ve included selections from staples like A Christmas Gift To You From Phil Spector and a couple of Elvis’ holiday collections. Additionally, I’ve mixed in some lesser known renditions from oldie and soul/R&B acts like the Platters and Gladys Knight & the Pips, as well as Brenda Lee’s version of a “rock” song usually associated with a country artist.

Being a fan of the classic country, I – of course – had to include Loretta Lynn and Johnny Cash and others of the ilk. The John Denver song was a must-include because my wife loves his voice, and his A Christmas Together with The Muppets is one of her favorite holiday records. The Merle Haggard song I included is the one exception to the recorded-from-my-records rule, as it came from a CD. However, I do have a Merle Haggard Christmas LP, but it is from his early days on Epic when he was rerecording his classics songs…and I do actually have that original version on a 45 somewhere, but it’s not easily accessible at the moment…so I felt guilt free about substituting the CD rip instead. 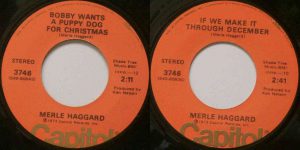 And this brings me to the tracks I insisted on including from the records I grew up with. The five Christmas albums that my family had, for as long as I can remember, were Johnny Mathis’ Merry Christmas, The Jackson 5 Christmas Album, Christmastime with Gene Autry, Merry Snoopy’s Christmas, and Disney Christmas Favorites (we also had Ray Conniff and the Ray Conniff Singers’ We Wish You a Merry Christmas, but I somehow failed to include a track from that classic).  I had to include Johnny Mathis’ rendition of “O Holy Night” from that very record I grew up with, because it is one of the most beautiful and moving versions of the most beautiful and moving carol and worship song ever… and that old record has a few scratch skips in the first verse that are so ingrained in my memory that it’s jarring to hear the clean version in my CD/MP3 collection. I included 2 tunes from the Jackson 5 record, because I love the uptempo funk tunes and thought that my mix needed one of their excellent slow jams as well. The Royal Guardsmen are most known for their songs about Snoopy and the Red Baron, but this lesser known B-side just represents so many things that I love about the holiday season… I even recorded a cover version with a Christmas band I was a part of for a few years. The songs on the Gene Autry record seem to be rerecorded versions, different from those you usually hear on the radio… but those were the versions I knew first and the album includes some cute dialog from one of our favorite classic cowboys. 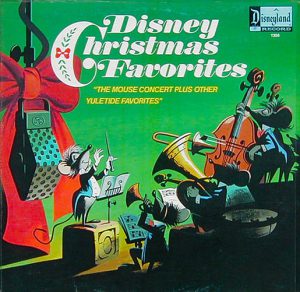 But the most important tracks in this mixtape, are the two songs taken from that Disney Christmas Favorites, my absolute favorite Christmas record of all time. This was a record that I actually didn’t realize was specifically holiday themed for several years of my childhood…it just seemed like a great record to listen to any time of the year (listening to Christmas music anytime other than the holiday season has since became a major peeve of mine… can’t start until after Thanksgiving… and listening to anything remotely Christmasy on the 26th is actually kinda depressing). The first song I included in the mix (which I intended to represent the first song of the second side of this virtual cassette) was taken from the side I of the record: the “Mouse Concert” featuring Ludwig Mousensky and the All Mouse Symphony Orchestra & Chorus. There’s a fun story behind that recording and the process of making it that I only came across in recent years. But beyond the sped up Chipmunkish gimmick, I truly think that the instrumental and choral arrangements of these songs are very original and entertaining. The other tune, from the second side of the LP, is performed by jazz singer and band leader Louis Prima, who also did the voice of King Louie in Disney’s animated Jungle Book. Senor Santa Claus has become one of my favorite novelty songs ever, because I love the way the music is arranged and performed (especially that enrgetic 60’s drumming) as well as imagining that young boy writing such a sweet and sincere letter to Santa for the sake of his sister, warms my heart with the greatest of Christmas Spirit.

Hopefully you’ve begun streaming or downloading this mixtape as you’ve been reading my explanation here. I’m truly proud of this Holiday Mix, and I’m excited to share it with the world. Thanks for listening and Merry Christmas!