When you get invited to a random show at a bar, you never know what to expect.

Halloween weekend I was invited to just such an occasion. A friend invited me to see a friend’s band play at a bar. This is the sort of thing that happens a lot if you’re young (or delusional about your age) and live in an urban (or near urban) area, like Upper Darby and West Philadelphia. My wife and I showed up at the Boot and Saddle in South Philadelphia Saturday night not knowing what to expect, other than the headlining performance of the West Philly Orchestra.

But then things got weird. My wife pointed out the chalk board display of the night’s bands, and one name stood out like a harvest moon on a black night sky: Mercury Radio Theater. 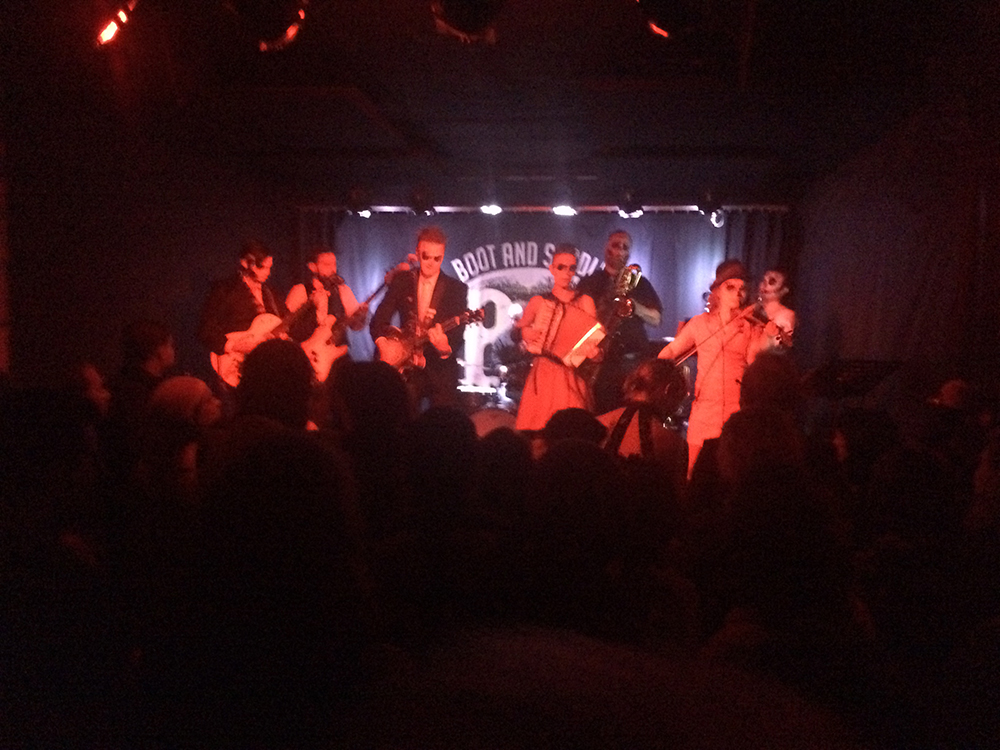 I have a long history of listening and following the music of Mercury Radio Theater. I first saw them perform at Eastern University in the Gough Great Room in 2002. They had been around for something like a year at that point, performing punk shows framed around an old radio broadcast of a horror story. At the time the band was a three-piece outfit, and their brand of instrumental, surf-influenced, horror punk was exactly what I wanted at the time. I was a fan of the once-Christian band Calibretto 13 (later Calibretto which then led to the formation of Harley Poe), as well as never-Christian punk bands like the Misfits. Mercury Radio Theater brought an instrumental intensity and live entertainment to the genre that was unique and fun.

The night of the Eastern U show I interviewed the band for a book that I would never write. Over the next few years I was involved in booking them for a few shows. I booked MRT along with Calibretto on their final tour. Justin Harlan of this website and I booked them again in Quakertown, PA and I helped Justin run an MRT show at Circle of Hope in Philadelphia. During that time, I must have seen MRT play dozens of times.

Over the years, my music taste grew and matured as I (sort of) did. I became more interested in genres outside of the punk sphere, and fell away from following bands like MRT, though every now and then I’d go back to the Blue Eyed Model and the Death and Life of the Undead Boy in my iTunes playlist. Songs We Put the Fun Back in Funeral and Who Shot Whistler’s Mother? will always be favorites.

As my music taste grew and I lived in New York City I delved heavily into gypsy folk music and throwback jazz. Fast forward to November 1st, I learned that the friend of a friend band was none other than Mercury Radio Theater. I was shockingly surprised to be seeing this band I used to love so much play live for the first time in probably five or six years. I was even more surprised to see an eight piece orchestra climb onto the stage when they were set to play. Just as my musical taste had grown, so had MRT as a band, in number and genre. Long gone were the days of a three-piece horror punk band. Today MRT self describes as “punk rock exotica” and that might be the only way to describe what you’ll see if you go see them perform live.

Buddy’s role as frontman is part circus ringmaster and part Vaudevillian host, and his ability to hold a crowd’s attention and entertain as bandleader is second to none. Their genre influences have expanded well beyond horror punk and surf rock to include danceable gypsy folk, ragtime, and turn of the 20th century jazz. Their music is perfectly suited accompaniment for burlesque, and to the cheers of the crowd, their live show included a burlesque dance.

I expect most of the music I heard on November 1st to be in their upcoming project “The Fabulous Red Menace”, a self-described “rock experience for the working class.” The anti- capitalist critique weaved through their live show, and even the burlesque performance rang of tongue-in-cheek critique. While certainly entertainers first, the deep thinker will appreciate the social criticism that subtly emerges.

Another surprise for the evening was Buddy’s expanse into lead singer. MRT has always been mostly instrumental, with gang vocals, shouting, and the smallest scant of singing mixed in.

It was a pleasant surprise to hear Buddy sing full vocals on one or two tracks, and his deep, haunting voice doesn’t disappoint.

Mercury Radio Theater doesn’t just live on, but thrives. Look for their undead corpses to rise to stage throughout Philadelphia. Check them out at mercuryradiotheater.com, mercuryradiotheater.bandcamp.com, as well as Facebook and Twitter. And the next time you get invited to a random show on Halloween weekend, expect the unexpected, because you never know when a spooky surprise awaits.