I first heard about GG Allin from a Boston punk who lived in my dorm in college. Well, I think he would have considered himself a punk. Most of us just thought he was a weird wannabe neo-Nazi who liked to cause trouble and desperately needed to shower. I was young and stupid and figured it was all an act, so I used to talk to him a lot. Favorite memories include the time he took everyone’s alcohol money and spent it on Medieval weapons he would later bring to our western civ class, and when he almost got me, a type-A overachieving student, kicked out of Asian Philosophy for laughing at him because he attended class drunk. He would later be kicked out of school for pissing in our RD’s air conditioning unit. Allegedly.

Needless to say, I was mildly intrigued in reading Allin’s My Prison Walls, now available digitally. My college pal approved of so little in his life that I needed to know about the man he gave the “okay” to.

What I’ve discovered is that I haven’t changed much: I think Allin was all an act. Or he was crazy. Or both. 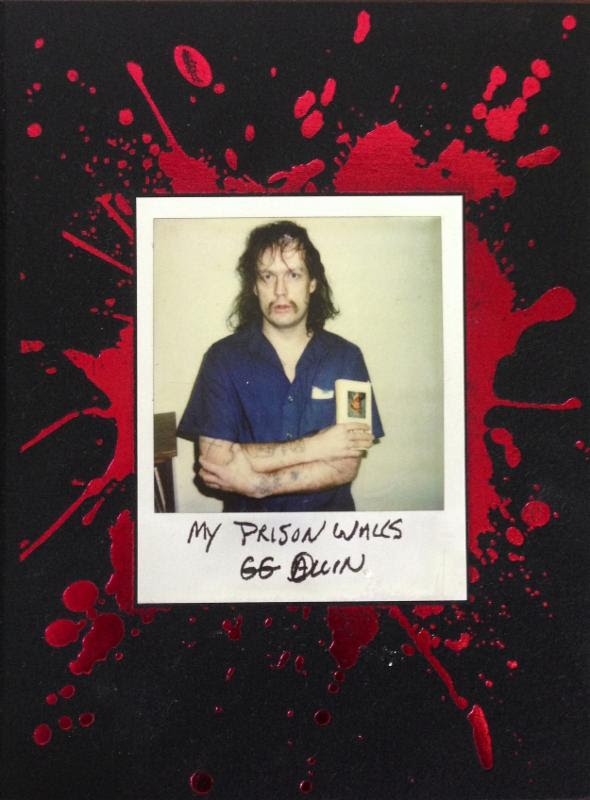 According to several Internet sources, Allin was officially arrested for felonious assault, with intent to do bodily harm. Less than murder, though, so I guess there’s that. There would eventually be a psychiatric evaluation while he was imprisoned that he was very against, which only proves further to me that it was necessary. 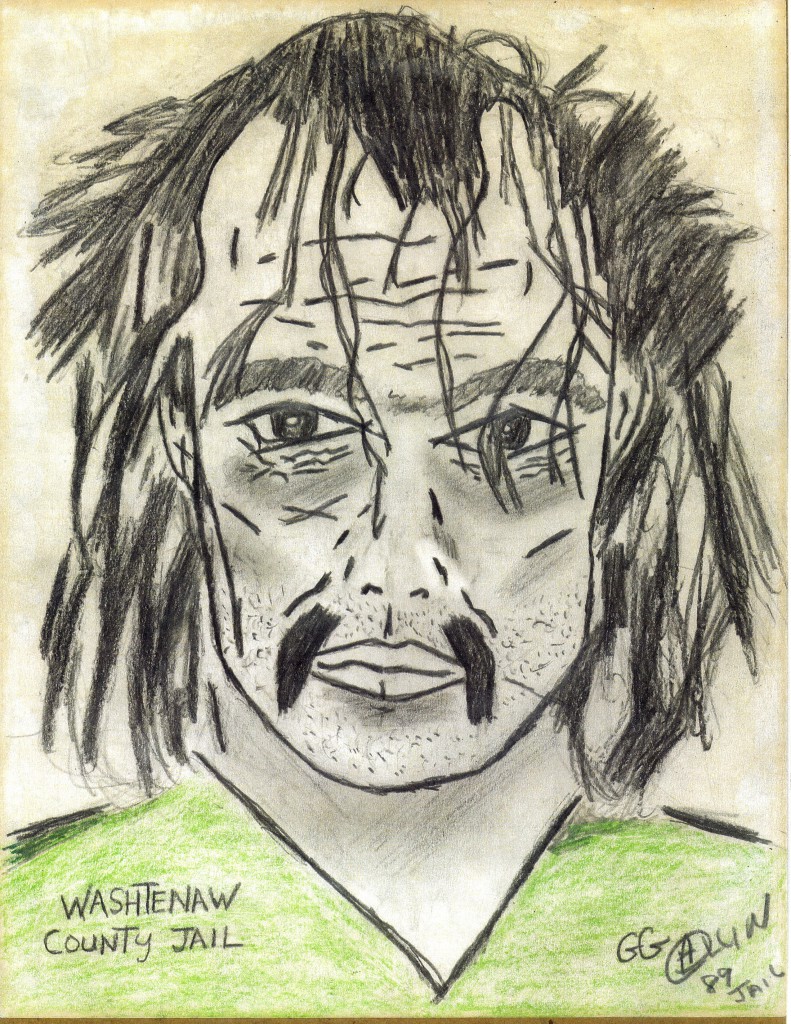 There is a lot of rambling in these diary entries, a rambling that continues in his letters to his brother, mother, various bandmates, which makes up much of the book as well. In between are sketches done by Allin, which range from pretty cool to gross and juvenile, and letters and illustrations from famous serial killer John Wayne Gacy, who grows to consider Allin a friend. There is also a section entitled “Portraits of GG by Convicted Killers.” For a pop punk/emo chick from the northeast, all of this is pretty disturbing to me. I found myself hoping he’d be diagnosed and committed to a hospital, but it appears that it isn’t what happens.

Eventually, Allin does get out of prison. Sadly, he died in 1993 of a heroin overdose, which seems extra lame compared to how he seemed to want to die — I read of rumors of him offing himself at a Halloween show. Not that that’s exactly desirable, either, of course. 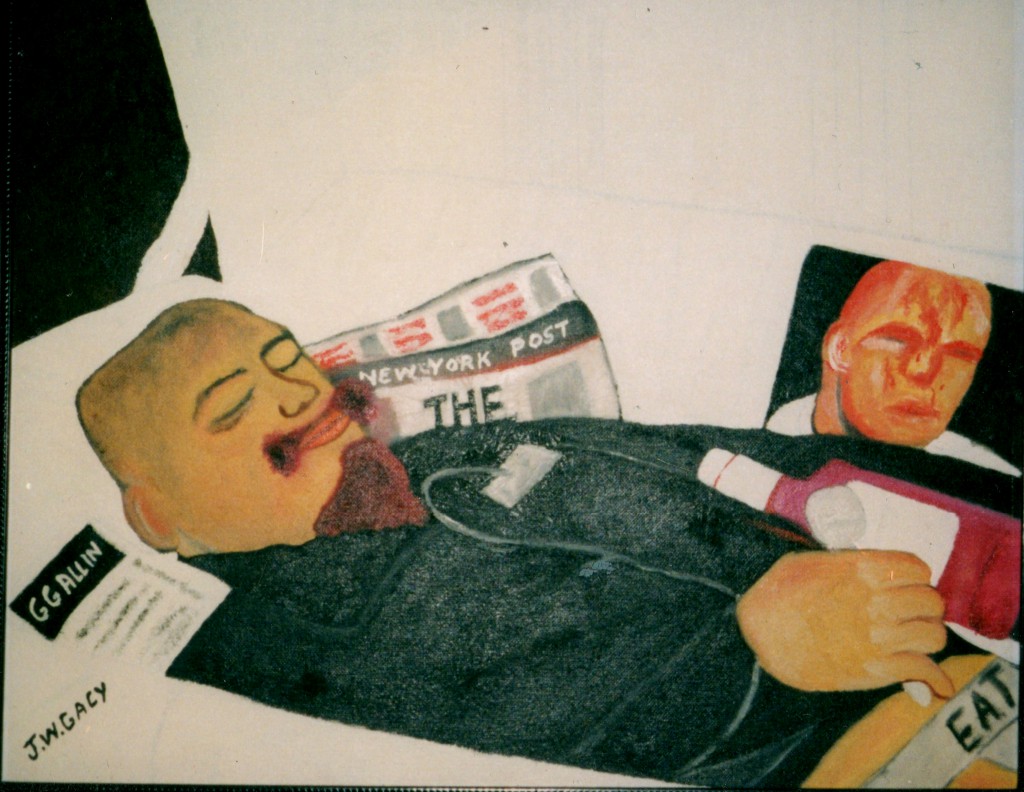 I have never listened to Allin, and I’m not sure I’d want to, even now. But it was definitely interesting to see the way he sees the world for a bit. It seems to me that he always knew his words would be published, or that he really did descend into madness, or some combination of the two.

Either way, he really should have given his hand a break. 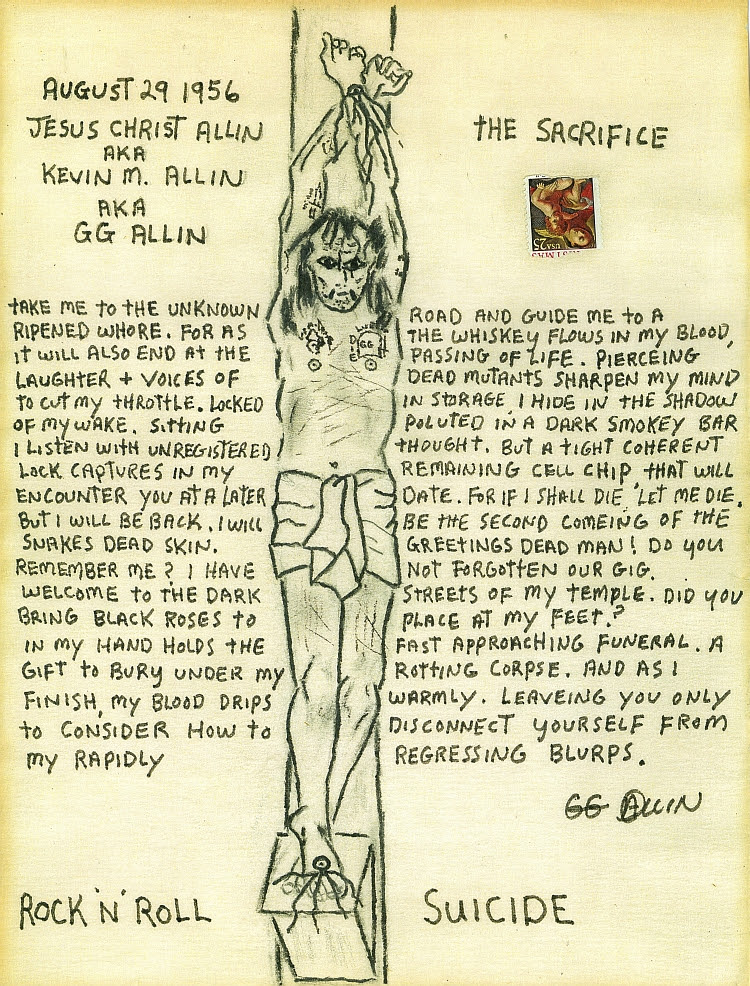