It never ceases to amaze me how many successful bands New Jersey has produced, more specifically the town of New Brunswick. The Rutgers University city has produced acts that include Bon Jovi, The Smithereens, Catch 22/Streetlight, The Gaslight Anthem, Midtown, Thursday, and the topic of this review – The Bouncing Souls. Playing a basement in New Brunswick is a birth right for any upcoming punk/pop punk/rock outfit coming out of North/Central NJ. 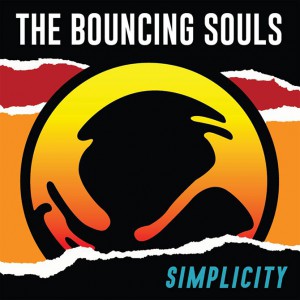 The Bouncing Souls have been around since 1989, when I was only 5 years old – that fact makes me feel insanely old but also puts me in awe of how these bands last through the years and continue to produce catchy fun tunes. The album Simplicity is just that – a simple no non-sense Souls record that is a perfect summer time record. This record is your typical Bouncing Souls release – nothing more and nothing less, and that’s okay for them. They never try to be anything more than what they know they are – a catchy punk outfit that knows how to write a hook and back them up with fun chord progressions. This album is what I like to call perfect for summer driving weather. You know what I’m talking about – those beautiful days when its a bright warm 80 degrees out with a light breeze, you roll the window downs and put on your favorite tunes cranked up on the car stereo and just drive. Driving weather is a thing – trust me.

One thing that strikes me when listening to Simplicity is how much I hear influences from another legendary punk band – Rancid. So many of the songs on this album give me hints of …And Out Come the Wolves and Life Won’t Wait. I’m sure there are other influences that the boys had when writing this album, but I keep going back to those two Rancid album as I listen. If I had to be at all critical – some songs tend to blend together and become forgettable, but there aren’t many. Faster tracks like “Euphoria” and “I Wanna Be Bored” are big stand outs that hit you hard and fast. But where I think this album truly shows the bands depth is with the slower tracks. “Satellite” is one of those songs that sucks you in right from the beginning with just a guitar riff and vocals before hitting you with the whole band. “Gravity” is another slow stand out that brings out hints of Unwritten Law and their slower ballads. I know I said I only heard Rancid influences, but hey I can change my mind as I write and continue to listen.

If you are a Souls fan then picking this one up (or streaming, whatever you young folks do now) is a no brainer. It’s bands like this and the ones I mentioned earlier that make me proud to be from New Jersey. We have produced so many incredible artists that the list is literally endless. I could write about that whole topic for days, and maybe I will if Justin lets me..

For now, its back to Bouncing Souls, drinking beers, and wearing Adidas.