Black Rose is one of those baffling films that you can’t believe even got made in today’s day and age. How did this get any funding? This film is such a surreal experience. It’s like watching an action film starring a random extra who got his butt kicked in a Jean-Claude Van Damme movie, who miraculously convinced some investors and producers to produce and invest in a film where he writes, stars and directs the movie. It was apparently held back from release for three years, and is only getting unleashed upon the world this year. And after seeing it? I can see why it was held back. And I personally think all copies of this flaming car wreck should have been incinerated.

Black Rose is a vanity project for its star Alexander Nevskey who stars, writes and directs this cinematic abortion. And he is a total failure at all three. He’s a horrible actor who has all the charisma of an empty plate and delivers his lines like he’s a deaf zombie, his writing is full of stock cliches, and some really cringe inducing lines of dialogue, and his directing is chock full of over use of slo-mo, time lapse, and is as flat as his forehead.

The rest of the cast features some genuinely talented actors like Robert Davi and Matthias Hues. Who are sadly wasted in such a shitty film like this one. The cast is then rounded out with some adequate actors like Kristanna Loken, and Adrian Paul. The film also has action film veteran Sheldon Lettich as one of the producers. Why? I have no idea. (Mike)

Woof! Mike really didn’t like this one… like, not even a little bit. I on the other hand wholly get this film’s place in the world of entertainment. While I can agree that isn’t what I’d call a “good” film, it’s a ton of fun once you are able to accept it for what it is. This is the type of film Canon made a living on, only more family friendly than most of their fodder. A few exploitative sex scenes could actually have done this film a ton of good, but that’s not what it wants to be. Instead, it’s essentially a pilot for CSI: Moscow, introducing us to the Russian hero and his lovely American sidekick over an 83 minute mid-budget thriller with a wholly network TV look and feel to it.

The cast is strong and the script is not on their level, sadly. The dialog is the same type of bad that seems to somehow work on network television crime shows, once again creating the feel of a pilot. Once I understood that the best way to watch this film was as if watching a TV movie or pilot, I had a good time. Had I really tried to make this some type of bigger cinematic experience, I think I’d have ended up right next to Mike in the “hated it” camp. (Justin)

The plot concerns a serial killer called the “Black Rose Killer” who is on a killing spree in Los Angeles. Russian Super Cop Vladimir Kazatov (Alexander Nevskey) is sent to L.A. and given the job to help hunt down and find this killer before he kills again by Captain Frank Delano (Robert Davi). His first partner flakes out on Vlad when Vlad shoots some muggers, so Vlad is assigned a new partner in criminal profiler Emily Smith (Kristanna Loken). The two form a quick bond, and they band together to solve the mystery of who is the Black Rose Killer, and bring him to justice.

The plot is as generic as it sounds. This is paint by numbers stuff that is about as interesting as watching paint dry. It’s predictable 9 times out of ten, and when it does have some surprises? They still don’t leave much of an impression. Like for example, the killer is revealed near the end of the film, and his identity genuinely surprised me. But when you think about it? It doesn’t make a whole lot of sense that the killer is this character and his motives are rather muddled. (Mike)

The plot is generic in many ways, the surprises aren’t all that surprising, and the film plays as very middle of the road. However, there’s a decent little reveal at the end, even if the “final battle” ends up rather anti-climactic. The way it resolves, however, really felt appropriate for a pilot, as noted before, or at least as a very intentional way to allow the filmmakers to continue this story with a sequel. I found the leading pair pretty compelling and love Davi whenever he’s on the screen (I mean, how cool does he look in the black and white picture below, right). Adrian Paul is the only actor that doesn’t really always hold up his end of the bargain to me. 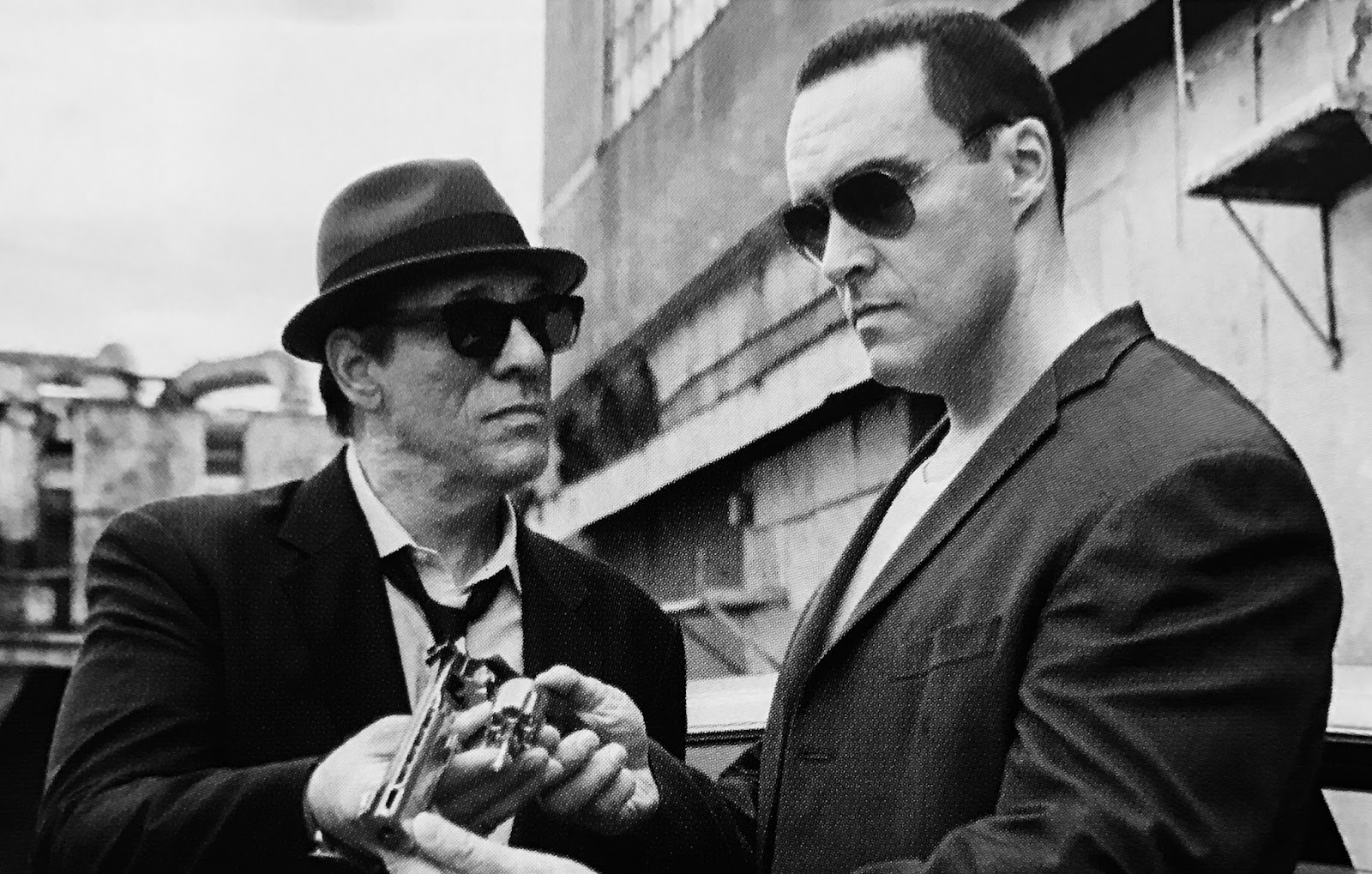 And for a film labeled a crime thriller? It sure isn’t very thrilling at all. I have taken shits that have delivered more thrills than this movie does. The crime elements are toned down. You have a serial killer who likes to tie up and torture his victims and all you ever see him do is do some cuts on the victims faces and that’s it. Most of the time the film cuts away from the kill and only shows aftermath shots when the victims are found dead somewhere. In fact, the first time we see the killer do anything he takes a tube of lipstick and laughable tortures this lady with it by writing on her face. With this type of film? Go big or go fucking home. The action scenes in the film is pathetic. Most of the time they are poorly choreographed and feature gun shot and blood graphics that are so bad they look like they were done in MS Paint.

Okay, I’m with Mike on this one. Thrills weren’t really all that thrilling here. Moreover, the gore was definitely non-existent. For a killer who like to commit “gruesome” crimes, these didn’t even push the limits of what you could have seen on primetime NBC. Can’t help but think that they really wanted this to be relatively family friendly in some way… though, the whole escort service and human trafficking thing that’s just under the surface may nullify that argument a bit. I could have use a little bit more blood and gore, as well as a soundtrack that lent itself more towards tension than a Miami Vice update. This is definitely not a thrill ride. (Justin)

Nevskey thinks he’s the next Van Damme or Seagal but he’s not even remotely in their league. He isn’t even on par with Seagal’s fat ass circa 2017. The score in this is putrid. It’s a horrible combination of dubstep, techno, 80‘s rock, and country rock that makes your ears bleed. The film is also paced about as slow as a glacier, it’s beyond boring, and it’s full of lame lines of dialogue, inaction scenes, terrible thrills, and it offers absolutely zero entertainment value whatsoever. It stinks like fish pastries left out in the sun. 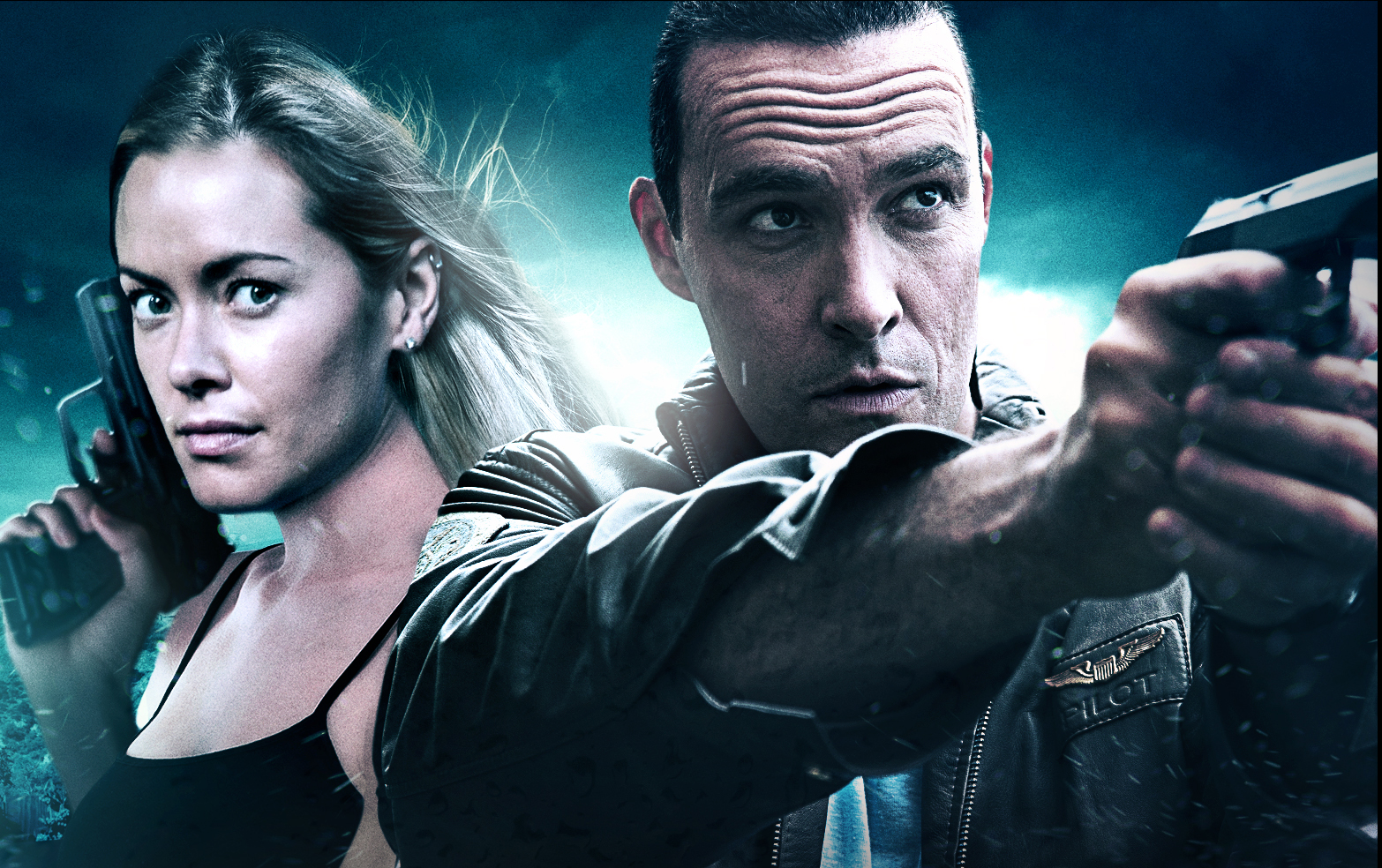 Here’s a taste of some of this film’s wonderful dialogue. What follows are real quotes from the end of this atrocious movie.

Emily: Was I a good wingman, Vlad?
Vlad: The best I ever had. And the most prettiest one.
Emily: Are you hitting on me?
Vlad: No. Not yet. My English is not that well.
Emily: Well, we don’t need English for the language of love.

What did that even mean? This is why you don’t let a wannabee action star with English as his second language write a screenplay. Dear Lord, this film was bad.

I don’t know where Mike keeps his Tylenol, but I do know that I thought this was fun. No pain relievers necessary for me. The look and feel of the film screamed “made for TV”; in fact, I’d suggest that the writer and director here look towards network TV in the future, as it seems like a fit for what they have going on. Nonetheless, I’d never try to assert this as a top film of the year, but it is a fun ride.

And PS. Nevskey is not an awful action star. He’s got some work to do to get where he needs to be, but he’s got a certain “it” factor that I can’t deny. (Justin)

You can and should check Nevksy and his insanely huge biceps out on Twitter and Instagram. And keep your eyes out for the film on VOD, then give it a watch and see if Mike is right, Justin is right, or we’re both dead wrong.