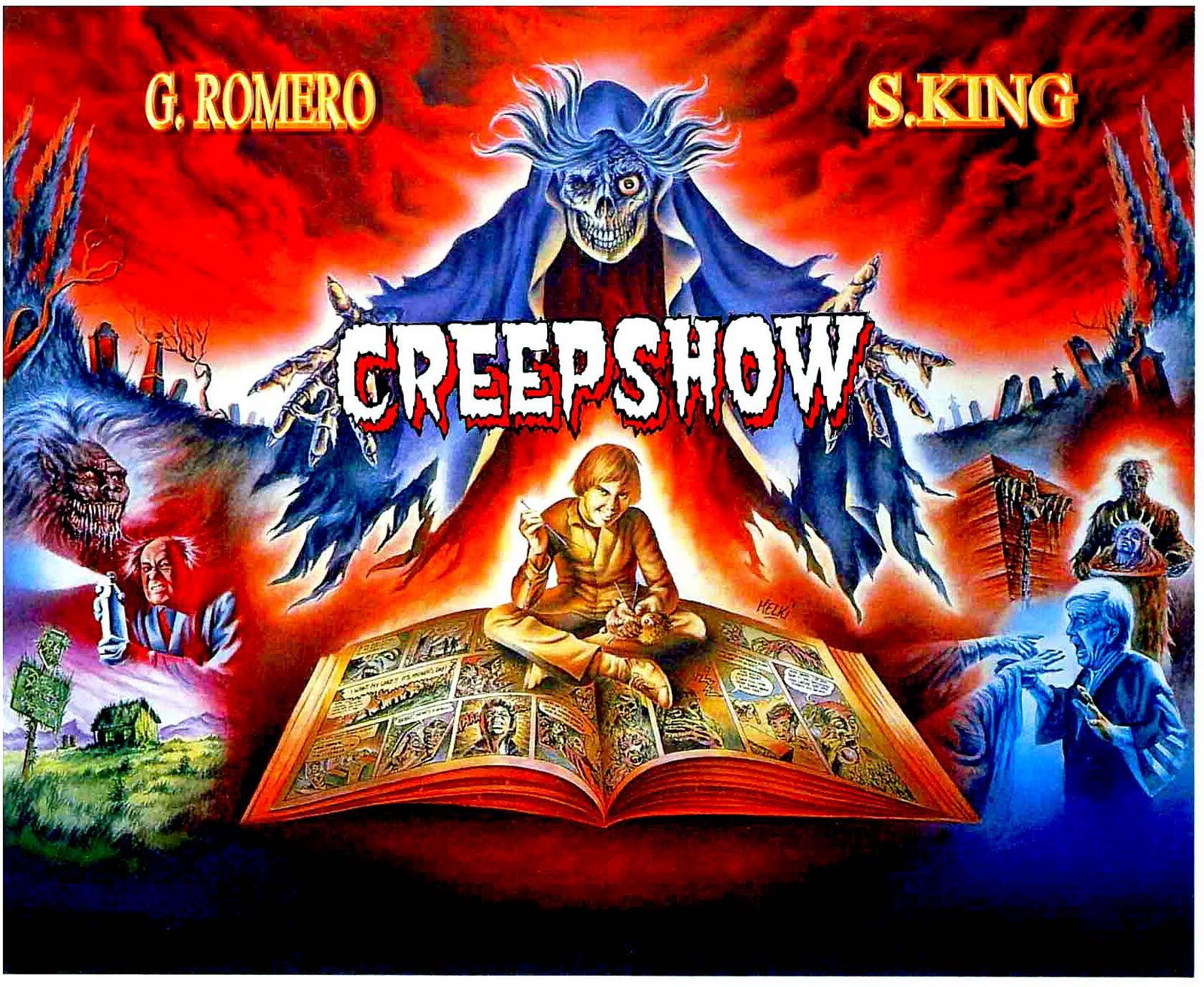 When I heard that George Romero died, I knew there would be many tributes written that would focus on his zombie films. There is no doubt that “Night of the Living Dead” was groundbreaking in many ways – interracial romance, non-white protagonist, people eating human flesh, etc. I can still vividly recall seeing “Dawn of the Dead” (one of the best sequels ever made) in the theater and getting a rush from the over-the-top gore.
But for my tribute I wanted to focus on what I consider to be his five best non-zombie films.

George Romero’s collaboration with horror writer Stephen King, in his screenwriting (and acting) debut, tops my list of Romero’s non-zombie films, though technically there is a zombie in the film. This 1982 horror anthology is a tribute to the EC and DC horror comics of the 50s. With horror makeup master Tom Savini, Romero and King were able to create a film that combines 50s cheese and comic book humor with equal parts silliness and shock value and a few genuine scares thrown in for good measure.

Creepshow’s five stories are bookended by a story about a kid, played by Stephen King’s son, Joe (now a successful horror writer himself), who is punished by his father for reading horror comics. The first segment is called “Father’s Day” and involves a rich and obnoxious family, who can’t stand each other, bickering while they wait for “Aunt Bedelia” to show up for dinner. Though the patriarch of the family is dead, Bedelia apparently has some daddy issues. Don’t let the boring premise fool you – the element of surprise is at work in this segment and contains the biggest scares of the entire movie. Tom Savini’s makeup work is brilliant in this segment and if this part of the film doesn’t ruin Father’s day for you, it will certainly ruin cake for you. There are people who simply have to hear the words “It’s Father’s Day, where’s my cake” to turn into blithering idiots, lying on the floor in a fetal position.

The second segment, “The Lonesome Death of Jordy Verrill” is based on the Stephen King short story “Weeds”. King makes his acting debut in this one and pretty much carries the segment as he is the only character, other than a couple of brief appearances by two other characters. King’s acting is a bit over the top, but the segment has some great lines in it and ends on a devastating note.

“Something to Tide You Over” is the third segment and stars Leslie Nielsen and an about-to-be-famous Ted Danson. It’s a story of revenge that becomes a story of revenge gone wrong. Nielsen does a great job with the material, playing a wealthy psychopath enacting revenge on his adulterous wife and her lover, played by Danson. The writing is the strong point in this segment. Hats off to Mr. King for making the line “I can hold my breath for a loooong time” simultaneously hilarious and creepy.

“The Crate”, also based on a short story by Stephen King, is the fourth segment and stars Hal Holbrook, Fritz Weaver, and “Swamp Thing” hottie, Adrienne Barbeau. Adrienne Barbeau’s Wilma is an alcoholic with a big mouth and Hal Holbrook is her hen-pecked husband. Weaver is Holbrook’s university colleague who discovers a crate that contains something awful. Holbrook decides his wife and whatever is in the crate need to meet. Hilarity ensues.

The final segment is “They’re Creeping Up on You”. E.G. Marshall plays an eccentric, but ruthless, businessman who is such a germophobe that he keeps himself locked away in a penthouse apartment that is basically a high-tech sterile bubble. Until the cockroaches show up. Not my favorite segment, but has a great gross-out scene at the end.

MONKEY SHINES: AN EXPERIMENT IN TERROR

Monkey Shines, released twenty years after Night of the Living Dead, was Romero’s first studio film. It stars Jason Beghe (G.I. Jane, Chicago P.D.) who in his first starring role, does a tremendous job. I’ll never understand why he ended up being a character actor instead of a leading man. The movie is long (filmed from a 240-page script) yet still cut to pieces by the studio. It only has about a 50 percent score on Rotten Tomatoes and Roger Ebert only gave it 2.5 stars. Critics and tomatoes be damned: I love this movie! I would love to see an extended cut that has a lot of the footage cut by the studio. Beghe’s character is an athlete, who becomes quadriplegic after getting hit by a truck while out running. He ends up with a service monkey that develops a psychic connection with him. If Beghe gets angry at someone, so does the monkey. From here the movie become all about murder-by-monkey. I’m sure Romero was trying to tell a darker story, but bowed to studio pressure to give the movie a lighter ending. Even with its late-eighties schlockiness and sub-plot involving a romance between Beghe’s character and the woman who trains the monkey, this is a favorite movie of mine. I almost put it in first place on this list.

I cannot give this movie enough praise! This is the movie Brian de Palma must have studied as he was filming Dressed to Kill. It is a brilliantly filmed story of a young man who believes himself to be a vampire. The movie begins with a long, claustrophobic Hitchcockian scene on a train. Martin is a very sexual movie where a syringe is the phallic symbol of penetration hinting at the main character’s impotence. There is an air of ambiguity in the film as well. If Martin really is a vampire, then why does he need a syringe full of drugs to incapacitate his victims? If Martin is NOT a real vampire, then why does his older cousin treat him like one, even going to such great lengths as to perform an exorcism on him?

As with most Romero movies, Martin is filmed in the Pittsburgh, Pennsylvania area and utilizes local talent. John Amplas carries the movie well playing Martin, considering this was his first film role. He would go on to appear in Dawn of the Dead and Creepshow, working in front of the camera, as well as behind the camera, on many of Romero’s films.

This movie is built on old-fashioned suspense, though there are some good action sequences involving Martin’s kills. If I were basing my rank of these non-zombie Romero films objectively on actual excellence and not giving my personal preference more weight, “Martin” would actually rank first on this list.

Being fascinated with the duality of man, this movie has always been a favorite. I re-watched it recently and found that it doesn’t actually hold up well, much as the TV adaptation of Stephen King’s It doesn’t hold up well (not counting Tim Curry’s incredible performance, of course). Another Stephen King novel adapted for film, this movie has a lot working against it: mostly casting misfires and bad dialogue, not to mention terrible makeup work and an anticlimactic ending that is as disappointing as the cheesy spider ending of the TV movie It.

Much like Misery (a far superior film), this is Stephen King dealing with the darker ramifications of being a writer. Timothy Hutton turns in a half-assed, unemotional performance as Thad Beaumont, a successful writer who has used a pseudonym on his books. Faced with blackmail from some skeezball who has discovered his real identity and is threatening to out him, Beaumont’s agent and publishers arrange to “kill off” his pseudonym, George Stark, in a publicity campaign involving a real burial. George doesn’t like being dead and buried, and with the help of a bunch of sparrows (don’t ask), he traverses the bridge between the realm of the dead and the living and becomes an actual person. Unfortunately, this person is also played by Timothy Hutton and looks like The Walking Dead’s Negan with a bad complexion and Billy Bob teeth.

George goes around killing everyone involved in his “death” and Thad gets blamed because guess what? George has the same fingerprints and DNA as Thad. Cool little back story here – turns out when Thad was a kid he got these blinding migraines that became so debilitating they had to do brain surgery on him. While doing the surgery, the doctors discovered an absorbed twin in Thad’s brain, basically an eyeball, a finger, and some Billy Bob teeth. OK, that’s all the time I’m going to waste on that one. Watch it yourself. The strange thing is, “The Dark Half” was made in 1993 and feels like a crappy 80s movie, while Monkey Shines, which was made in 1988 is a far better film.

Confession time – I just watched the original 1973 version for the first time a few weeks ago. And I hated it. It was shrill, a migraine-inducing movie that could have used a better sound man. I’ve seen the 2010 version (not directed by Romero) several times and I love it. I will say this about the original: it was making a statement about the environment, the effect of chemicals and pharmaceuticals on people, and how terrifying it can be to know that your drinking water is not safe. The original film really gets that point across, while the remake does not. Both films do convey the fear that we have of losing our personal freedom under martial law. The idea that the government can, and will, quarantine people against their will and even exterminate an entire town for the sake of the greater good, is terrifying. After all, we live in a fragile delusion that we are a free country. But we are only one major disease or disaster from becoming a nation of prisoners. These are the truly horrific concepts conveyed in both versions of The Crazies, not the monsters that the contaminated drinking water turns people into. No, the real monsters are the companies that compromise our safety by polluting our environment with their chemicals, forcing our democratic nation to become totalitarian. In an age where the media creates and feeds fear into us daily with new things to terrorize us with – impending catastrophes by way of global warming, the enemies from within and without, and the government we can’t trust, The Crazies is perhaps the most terrifying of all of George Romero’s movies.