Tragedy Girls played Friday night at PUFF. You already miss this one but there are more awesome films all weekend. Get tickets for the rest of the fest at FilmFreeway!

Tragedy Girls is a terrific teen slasher with two of the most charismatic leads in horror history. It actually manages to bust open a few new doors for the horror genre in a particular time period that has been chock full of endless lame reboots, remakes, and sequels. It is not only a believable teen tale of terror but it is wickedly clever and loads of fun.

The story isn’t technically anything new. But it puts enough of a spin on things to make it feel fresh. Chris Lee Hill and Tyler MacIntyre have put together a violently brilliant script with fantastic characterizations, laugh out loud moments and plenty of blood and guts to throw around to appease the horror crowd. The only thing that I personally felt could have been better in terms of the script? Was the humor and the finale. They both were not terrible or anything. I just felt the film could have used some more biting satire, a few more laughs and a much more explosive finale. The ending was effective. And it definitely threw me for a loop. But I would have preferred to see more carnage instead of a fiery conclusion. But despite all of that? This is still one of the best scripts I have personally seen unfold in a horror comedy in a long time.

Tyler MacIntyre’s direction is absolutely phenomenal. This is an up and coming talent for sure. His fingerprints are all over the film. You can tell he had a lot of passion for this project and it shows. The camera angles are on point, he creates some absolutely stunning darkly beautiful visuals, pumps it full of vivacious verve and makes the film look like much more than the low budget indie flick that it is. I cannot wait to see his next film. The editing by Martin Pensa is absolutely amazing. So many shots in this film are edited so well that they leave an impact that hits hard. It is without a doubt some of the best editing I have seen in a film this year. The cinematography by Pawel Pogorzelski is also quite lovely. He along with the director combine together to pack a great punch. The score by Russ Howard III and the soundtrack choices are also music to my ears.

As great as all of the production elements are in Tragedy Girls, the biggest and brightest highlights are the girls themselves. Alexandra Shipp and Brianna Hildebrand are the perfect killer couple. The chemistry between the two is electric. Their charisma is off the charts and their personality is off the scale. These two are destined for cult glory and they deserve it. Their performances were so radical that despite the fact that these two are some of the craziest girls you will ever meet? You couldn’t help but love them. I adored every minute these two were on the screen. I really hope there is a sequel so I can see more from this wonderfully diabolical couple in the near future. The other cast members are solid as well. In particular Jack Quaid as Jordan Welch, the poor unfortunate soul who falls for the sadistic Sadie. A hilarious cameo by the supremely talented comedian Craig Robinson is also worthy of note, as are Nicky Whelan’s sizzling hot performance as Mrs. Kent and Kevin Durand as Lowell. 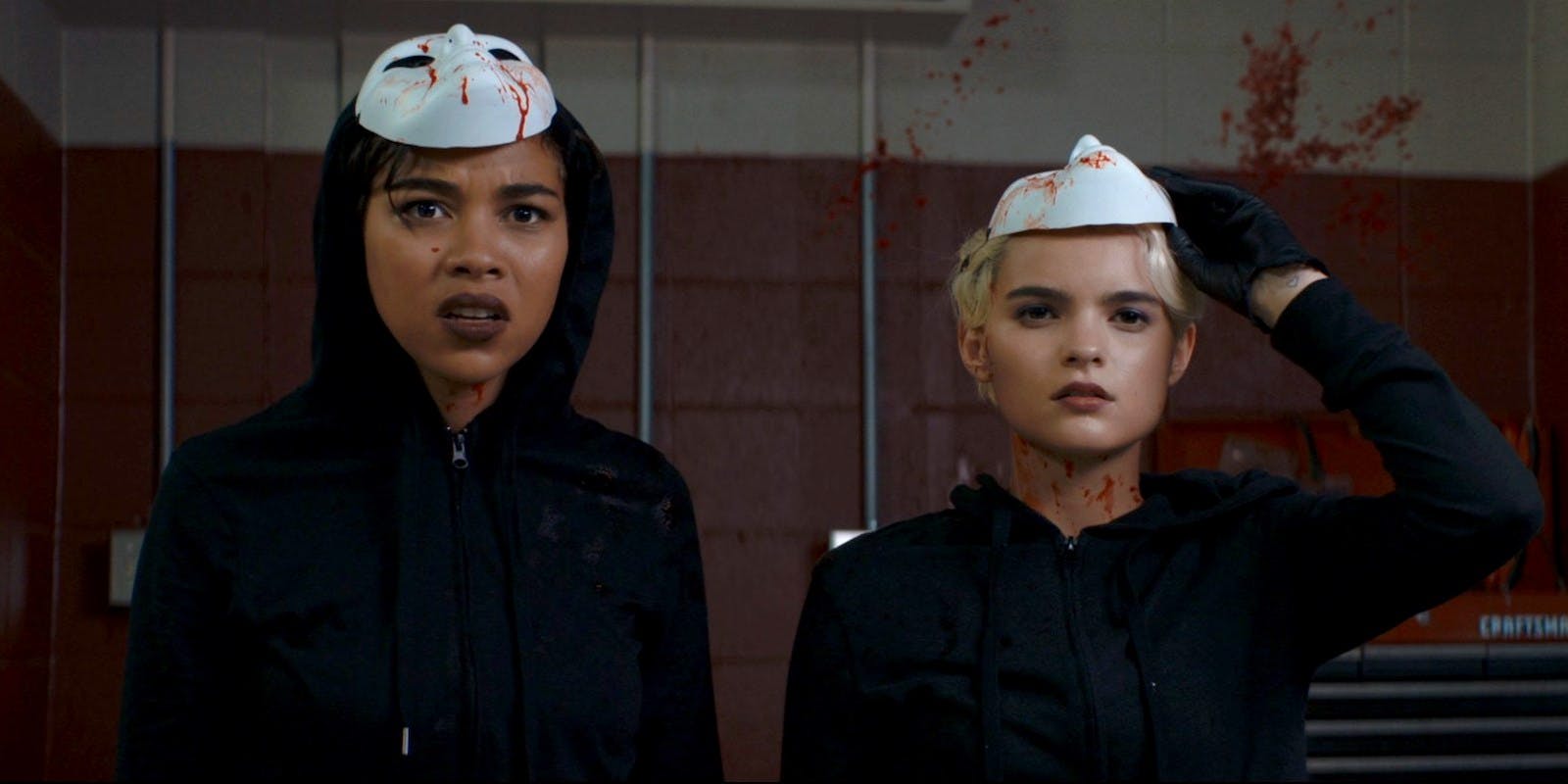 Tragedy Girls also features some dynamic and very impressive practical gore effects. There isn’t an ounce of CGI blood or gore in this movie. It is all practical and it is glorious to see in all of its gory glory. The kills are also quite creative as well. Which is why I personally wished the ending was a bit better. It could have used more blood and more creative fun kills instead of just a lame forgettable ending that burned me a bit. The visual effects were also really good. I liked how they incorporated different aspects of social media throughout the film in a fun way.

Overall? I cannot recommend Tragedy Girls enough. It is a blast for die hard horror fans and casuals alike. It wears it’s bloody heart on its sleeve and it fully commits to it’s premise. It is a modern day teenage horror classic that takes a few pages from those that came before like Heathers or The Craft but still manages to create it’s own unique identity. It is an immensely entertaining, first class flick with two powerhouse performances by the two leads and admirable writing and directing that makes it a twisted and terrific time at the movies.