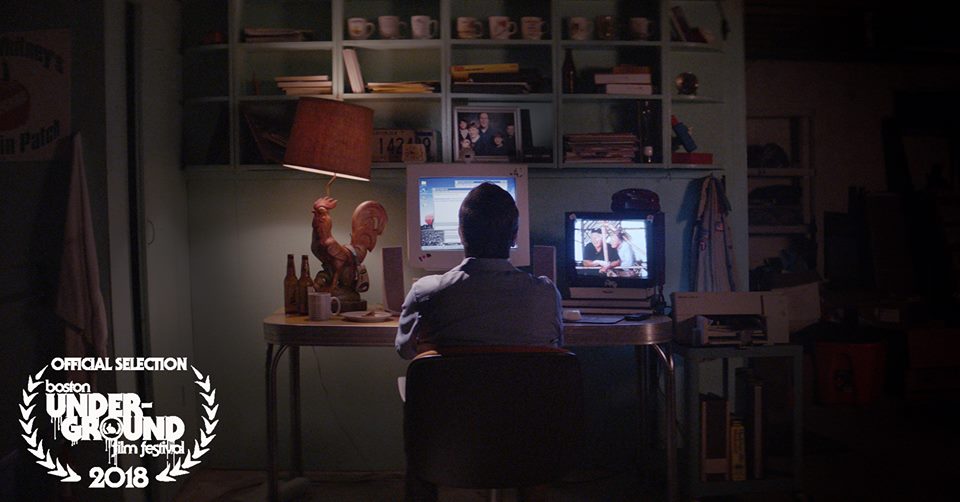 Doug is a “family man” who is also an online predator, looking for a good time with a young girl. He sits at his (very old) computer and starts to chat with a girl, asking her “ASL” – Age, Sex, Location. She is thirteen and home alone for the weekend. What great parents she must have. Little details, such as the rosary hanging from his rearview mirror and the door knocker on the girl’s front door, work as clues to what Doug is in for. I don’t want to give too much away, but the last two minutes of this seven-minute film are fantastic! Think Hard Candy meets Tales from the Crypt: Bordello of Blood. The great thing this film accomplishes is telling a full story with a more than satisfying ending in just a few minutes. A/S/L is a brilliant short horror film, and quite “tasty” too. It is my favorite of all the shorts I reviewed from the BUFF festival.

Entropia fittingly opens with the sound of the ticking of a clock, the sound of time slipping away, as its storyline revolves around an older woman trying to reverse the effects time has had on her body. She uses spell books and taxidermied animals in an attempt to regain her youth. Actress Sissy O’Hara carries the film with no one to work with but taxidermied animals as costars.

I must say this is the first movie I’ve ever seen where a woman shoves dead butterflies up her vagina. And if only that were the worst thing she does to her hoo-ha! This film is not for the squeamish. I don’t easily get grossed out, but I’m sure glad I wasn’t eating when I watched this. I would love to be in a theater showing this and watch people’s reactions!
Entropia makes a great statement about the pressure on women to stay youthful and the lengths they will go to accomplish it. It also takes many of the things that men are very uncomfortable with, and women are often ashamed of or embarrassed about, and puts them right in your face with a big middle finger salute.

Entropia is a quiet film, focusing on a single character who has a calm voice; thus it is somewhat weakened by its atonal score that is mixed too high in the sound and often distracts from what the woman is saying. Score aside, Entropia is an interesting and unique film that is designed to make people squirm, confronting the viewer with the parts of the feminine mystique that many of us are uncomfortable with.

Are You Wild Like Me? opens with a couple camping with their little girl and discovering that she has disappeared, a hole torn in her play pen. Nine years later, missing persons posters are everywhere, and we soon discover why.

Are You Wild Like Me?is a story about feral children and innocence lost. Filmed in a beautiful location, the cinematography is outstanding, the vivid colors of the great outdoors mirroring the innocence of these children who just happen to be doing horrible things. The film invites the viewer’s imagination to run as wild as the feral children, begging for a full-length feature to give a stronger narrative. Nawrocki does pull off a satisfying ending with a shot that is ambiguous enough to leave you wondering if the film maker is telling you how the children survived out there in the wilderness or telling you that their survival is about to come to an end.

Jolie Laide is an ambitious film with a large cast and some great sets. A woman named Mae, played by Jocelyn Leighton, walks into an underground club and meets a man named Lucy, played by Gene Dante. He leads her down into levels of hell, reminiscent of Dante’s Inferno, a literary connection to the film made obvious by the sign that says, “Abandon all judgment, ye who enter here.” Lucy (Lucifer?) is played like a cross between Malcolm McDowell’s character in A Clockwork Orange and Tim Curry’s sweet transvestite from the Rocky Horror Picture Show, albeit somewhat more subtly. Lucy does more costume changes in twenty minutes than Cher does in a two-hour show in Las Vegas.

Jolie Laide plays like a very dark Alice in Wonderland where the Mad Hatter and Cheshire Cat are LGBTQ, and reminds me of underground film Liquid Sky, a personal favorite of mine. Mae finds herself waking up after being knocked out by Carmen Miranda with a limbo stick. Don’t ask. She then discovers Furries going at it and a man and woman enjoying a BDSM moment. My favorite line in the movie is when May asks Lucy, “This is Hell, isn’t it?” He replies, “It’s Heaven for the wicked.” The themes of pleasure in suffering are akin to the Hellraiser franchise without the Cenobites.
Jolie Laide is a surreal film, as if Salvador Dali did acid with the Devil and had a nightmare he couldn’t wake up from. Or John Cameron Mitchell got all his friends from the cast of Short Bus to have a goth dance party in the subway tunnels beneath New York City. The film would have been just about perfect if it had been edited a bit more. There are some scenes that drag (no pun intended) on too long and I found myself losing interest at the fourteen-minute mark. However, it is a true art film that sets itself apart from most other short films of its kind.