How’s everybody’s New Year’s resolution going? We’re almost through the first quarter of the year and I’m honestly curious how some of you guys have fared coming through our current COVID-19 crisis. The current health crisis has actually swung in my favor with resolutions. Back in January, I aimed to eliminate movie trailers from my viewing schedule. I began unsubscribing from YouTube channels whose content was predominantly trailers or movie reviews. I wanted to know as little as possible about a movie. I still do. I’m so passionate about the film medium that I want to approach the medium as unbiased as possible. Plus, it probably doesn’t help that the internet has somewhat ruined our current age of films.

Nothing seems to be sacred now. Thanks to films shooting on location and phones coming equipped with social media and cameras, some things are ruined years before the films ever come out to the public. That’s just one moment taken out of context. Sometimes we can marvel at a character design. Most recently, the reveal of Robert Pattinson’s Batman suit for the upcoming The Batman, comes to mind. Then you have trailers. Trailers can ruin everything. Quite possibly, the film that I would argue started my internal debate on whether or not to give up trailers would be the film you’re reading a review for now. Like a Boss popped up on my radar late in the fall of 2019. 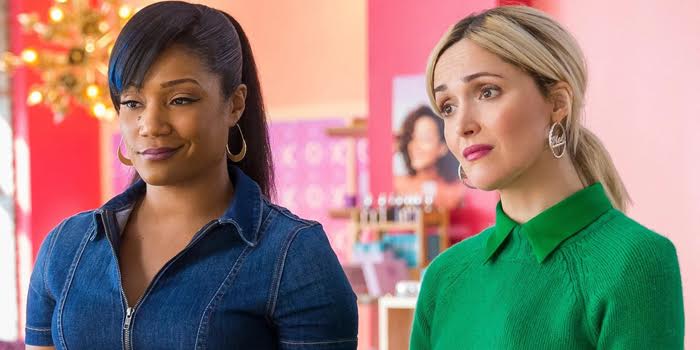 The trailer basically gave away more of the plot then I would have liked. But hey, what trailers don’t do that nowadays? The film released digitally on April 7th, 2020. Boss released April 21st, 2020 on the physical media market. Like a Boss chronicles the relationship of two up and coming make-up entrepreneurs, Mia (Tiffany Haddish) and Mel (Rose Byrne), who face off against industry titan, Claire Luna (Salma Hayek), in a fight for their company. I saw this film back in theaters and reviewed it for my own website, Victims and Villains.

Upon revisiting this film again, I found myself with a couple of truths. First off, the chemistry between Haddish and Byrne is immaculate. Without a doubt, the strongest leg that this film has to stand on is its leading ladies. From the film’s opening moments, Byrne and Haddish quickly establish their incredible chemistry. There is just a beautiful balance between the two. While Haddish is the wild one, Byrne is more reserved. The mixture between the two balance one another nicely. In the end, it makes these ladies worth the watch. Some of the funniest moments happen with these ladies. Chemistry like this is a rare gem to find in today’s comedy market.

However, it’s the values of these characters which really make me respect this movie. The themes that pour out about beauty is a refreshing thing to experience in our modern world which fixates on a narrow view of beauty. I won’t dive too deeply into that here, but this movie definitely has my respects, even if it can’t level up to be the greatest like its antagonist of Hayek would want. I haven’t seen too many comedies with Hayek. Most of the performances I’ve seen from her are usually dramas or thrillers. It’s interesting to see an actress of her caliber come into a movie like this. She is so animated here. Her fun with the role allows for an equally fun time as a viewer. Hayek as the villain is so conniving, yet brilliant. She seems to exist within another realm outside of the film, while still existing within it. It’s a bizarre marriage which works in the film’s favor. 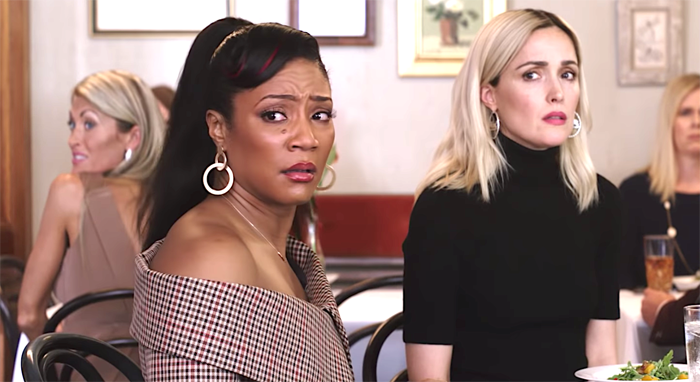 This movie wouldn’t be for everyone. The trailers showed off probably more than they should have and, in all honesty, gave away some of the film’s best moments. The film barely scratches the surface of 80 minutes and underutilizes a lot of what it is given, which in the long run is actually the biggest flaw of the film. A good chunk of the film is predictable, mostly because we’ve seen plots like this before and the promotional run gave a lot of it away. The side characters of Boss outnumber its core cast 2 to 1. It is still a rather fun time.

Much like Billy Porter’s character in the movie, a lot of what made physical media great is starting to die out. Back in the day, you could buy a DVD or Blu-Ray, have your movie, and spend the same amount of time as the movie, if not more, watching the special features. You could have director commentary, featurettes, games, and more. Those are starting to die out. Physical media, over the past ten years, has been switching to combo packs. Like A Boss is no different. When you pick up the movie in its physical format, you are welcomed with three different ways to watch or even share the movie in Blu-Ray, DVD, or digital. The special features are only roughly ten minutes in length.

This particular passage highlights the multiple ways to watch the movie. You get your choice between eleven different languages to watch it. Some of the eleven are just a few different options for English and Spanish. You can also view the film in French, Italian, Japanese or Portuguese. It also offers viewers the options of seventeen different languages of subtitles from which to choose, including that of the languages previously listed and more. Special features for this Blu-Ray include a making of featurette, which seems fairly standard for today’s market; a set of deleted scenes, if they could even be called that (it’s one scene split in two, not even joking). Perhaps, though, the highlight of this passage would be the featurette “Get Some with Ron and Greg”. This featurette is a short skit that fleshes out the makeup rivals of the movie a bit more. Quite frankly, it’s rather hilarious. So, there is that.

This film might be better on digital. The chemistry between Tiffany Haddish and Rose Byrne is a refreshing angle for the modern comedy genre, which is a strong factor that helps Like A Boss stand out in a major way. Salma Hayek is another welcome refreshment. Her comedic turn as the animated villain of the movie gives the film an extra layer of flair. As a film, it hosts some terrific themes, but the short runtime and overflow of characters makes this one a cautious tale. Then, the special features aren’t really all that enticing. The stand-out, “Get Some with Ron and Greg”, doesn’t stand out enough to warrant the price tag for physical when digital could work just as fine.