Pete Seeger died early this week at 94 years old. In his near century of life he would challenge the system through both music and activism. Seeger was a man of the people but also a man of music. He was an artist who over his career became the catalyst for American folk music through his group and solo efforts. He wrote folk classics “Where Have All The Flowers Gone?”, “If I Had A Hammer” and adapted the Ecclesiastes passage into the now famous “Turn, Turn, Turn” which was made famous by The Byrds in 1965. 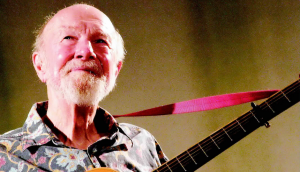 Seeger’s folk groups The Almanacs and The Weavers were pioneers in the genre and not only made music but were a voice of change. The Almanacs were very political and heavily involved in the workers rights movement and pro-union causes. Band mates included many heavy hitters of the 1940’s folk scene including Woody Guthrie who in his own right was a godfather of folk music. Seeger performed under the alias “Pete Bowers” to avoid any heat going towards his father who was involved in politics. The Almanacs changed their name to The Weavers and the group began to see some pop chart success. In 1950 they would top the charts with their cover of Lead Belly’s “Goodnight Irene” but the groups career would be derailed by 1953 because of being blacklisted by McCarthyism.

Seeger was part of the Communist Party of The United States of America as well as being a supporter of civil rights, workers right and various labor causes. He would distance himself from the CPUSA by 1949 though many who were critical of Seeger never saw him as anything else than a Commie. Seeger had become disillusioned by the Soviet communism that used violent means to take over Eastern Europe. He was very critical of Stalin even writing a song about it called “Big Joe Blues”. A lifelong proponent of nonviolence Seeger turned his attentions to helping other causes and while he remained friends with many with in the CPUSA he never returned. Seeger said of his political views “I still call myself a communist, because communism is no more what Russia made of it than Christianity is what the churches make of it.”

He would always be politically active lending his voice and songs to a new batch of folk singers emerging in the early 1960’s. Bob Dylan and Joan Baez would take songs that Seeger wrote or helped make famous like his rendition of “We Shall Overcome” and turn them into an anthem of a generation. Throughout the Civil Rights Movement and the Vietnam War his music and influence was everywhere. His songs and folk styling’s were mimicked and reworked into classic protest songs for years to come. The influence Seeger had on rock n roll was surprisingly huge seeing as folk and rock tend to be polar opposites. His writing and politics had major impacts on several more modern artists. Bruce Springsteen was so heavily influenced by Seeger’s music that he recorded an entire album in 2006 entitled “We Shall Overcome: The Seeger Sessions” that had no actual songs written by Seeger but all were folk standards that he was known to play.

Along with being a folk hero and activist, Seeger was a banjo player who wrote the quintessential “how to” book for playing the instrument. The book, “How To Play The Five String Banjo”, which was also an LP, was highly successful and directly impacted the instruments popularity. Many young people picked up the book and learned the banjo because of Seeger. He also invented the Long Necked Banjo or as it was later known The Seeger Banjo. He also would play the 12 string guitar which until his time was a relatively unused Mexican instrument made famous by blues legend Lead Belly.

Love him or hate him Pete Seeger was an American legend. Along with the likes of Woody Guthrie and Utah Philips he used his music to spread his political views to people. He influenced countless artists and also inspired many a teenager to pick up a guitar and even a banjo. Bottom line is with out Seeger there may not have been a Bob Dylan which means there would not have been a lot of rock n roll. It is safe to say that without the work and music of early folk musicians like Seeger there might not have been such an active counter-culture in America. Whether it was championing workers rights, civil rights or protesting wars the music of the 1940’s-50’s folk scene was heavily influential. It went on to influence the likes of Bruce Springsteen and further so Tom Morello of Rage Against The Machine. The truth is Seegers music and willingness to speak out is in many ways the very backbone to which punk rock and more aggressive music that had a political slant came from, whether the artist know that or not.

I myself was never a giant fan of The Weavers or that pop folk sound of the 1950’s but I was influenced by Seeger in many ways. I started writing country folk songs in my early twenties because of listening to a lot of Cash, The Band, Dylan, Uncle Tupelo, and Woody Guthrie. I did not know how much Seeger was influential in those artists, whether indirectly or out right, but it was evident once I discovered his music for myself. Politically I have never been a Communist but Seeger was someone I learned a lot from about Socialism as well as labor unions and other causes. I may not always agree with his views but I appreciated his passion and desire to help people better their lives through non-violent means. My heroes have always been more radical on the social spectrum from Jesus Christ to Martin Luther King Jr. and on to Joe Strummer. All of them were radical and spoke out against things they disagreed with but they also were people who loved people. Pete Seeger was one of those. He was a genuinely loving person who wanted to see things happen because he had compassion and empathy for mankind. He was a pioneer, a visionary, an inventor and a royal pain in the ass for the establishment. His passing leaves behind a great legacy that is both honorable but also highly influential well beyond his 94 years on this Earth. Pete Seeger is gone but his music, teaching, and causes live on in new generations and new forms. That to me is a tribute to a man that gave his life to his art, his land, and to people.