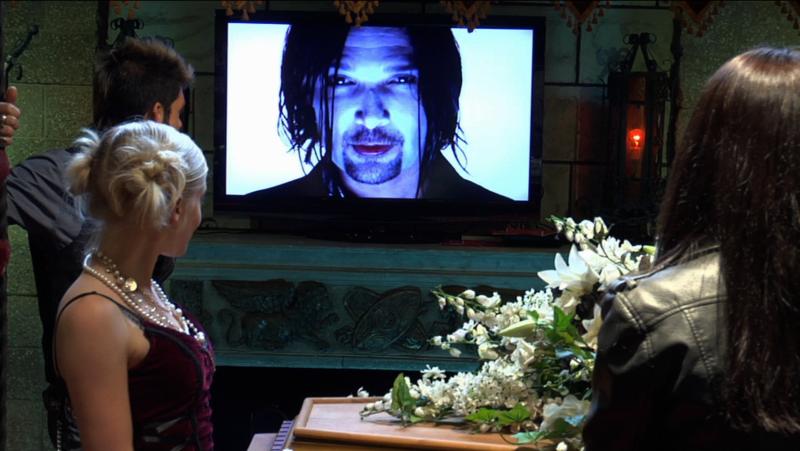 While watching bad movies there’s often a point where I’ll wonder whether or not this is the worst thing I’ve ever seen. For Splatter that moment came about 20 minutes into it. Now, granted, the entire short is a mere half hour long, but it’s not like I was on the fence prior to that. From the opening scene of Johnny Splatter’s suicide you can tell the tone they were going for: comedic horror. Unfortunately, also from the opening scene, you can see that they’re mistaking “comedy” as being “egregious Jack Black-style overacting” and “horror” as “lots of blood.”

Splatter’s genesis is as an Internet series: ten webisodes released in 2009. Since then it has been compiled into one seamless short film. Made by an all-star cast (Roger Corman, producer; Joe Dante, director; and Richard Christian Matheson, writer), and featuring a couple of big name actors (Corey Feldman and Tony Todd), the pedigree was in place to really give us something interesting. Yet they failed.

Johnny Splatter (Feldman) is an aging, pissed off, has-been rockstar. Deciding that his problems are the fault of everyone except himself, he enlists the aid of an old spell, kills himself, and invites his closest friends his estate for the will reading. And, properly resurrected by the spell, he starts killing them off.

I’m tempted to point to the script as being the root problem. After all, there’s nothing particularly funny within the script for the actors to even work with. In fact, other than a few one-off lines, this is a script that would play better done as straight horror. That, plus the fact that most of the comedic tone is due to intentional overacting, makes me think that maybe the script is less to blame and more the director’s interpretation of the script. Shooting this script with a serious hand, with actual acting, and a horror atmosphere? Maybe that would have worked.

Speaking of atmosphere, the setting is one of the few bright points within Splatter. Johnny Splatter’s estate is a sprawling castle, like something you’d expect from Beauty and the Beast, not a rockstar revenge short. There’s an elegant beauty to the props and the way they’re set up within this castle. They scream for a context that isn’t so absurd.
There is one possible utility to Splatter. While not recommended for actual viewing, it’s the sort of movie that you can put on the TV at Halloween parties. You know, the drunken, college-style parties where a bunch of twenty-somethings are paying more attention to beer pong and coeds than the movie. The setting and gore level lend themselves to party background atmosphere. Loop this on Netflix with the volume muted, while your stereo blasts your Halloween playlist on Spotify.

Otherwise Splatter is entirely skippable, and not even its short runtime should serve as temptation to hit play.