With far more in common with the rockers of yesteryear than the kids today, Zack Oakley’s Badlands takes a few pages each from Zeppelin, Jimi, Hawkwind, and ZZ Top. With those pages, Oakley builds his own songbook that feels at home with the psychedelic rock of the 60s, 70s, and early 80s, but still has its own acid drenched flavor.

Opening with the aptly named “Freedom Rock”, Oakley kicks of the album telling you exactly what you’re in store for. With vocal harmonies as tight as The Who, lead guitar riffs reminiscent of Hendrix, and a trippy feel that rivals even the most LSD induced rock from Jefferson Airplane, the 7 tracks that follow “Freedom Rock” blend heavy rock with unique sounds (sometimes intentionally off-kilter and out of tune), a ton of bass, and a sometimes tender flow. 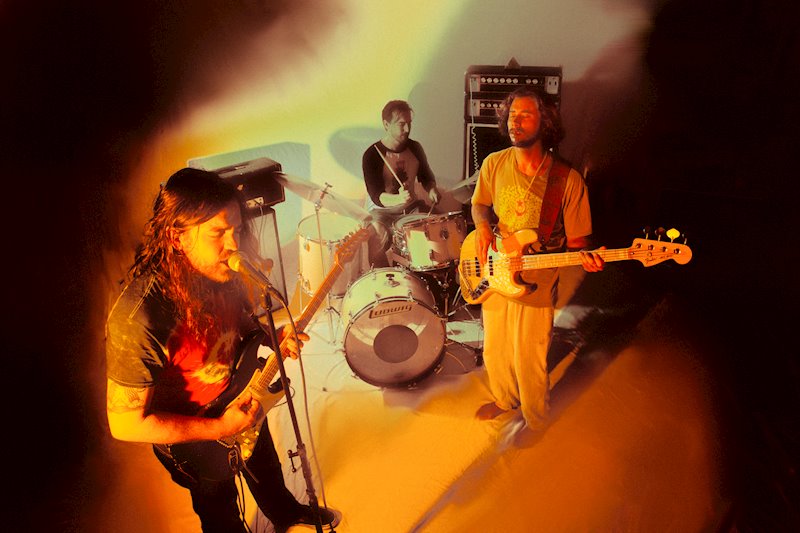 San Diego based rocker Zack Oakley is joined by Kyre Wilcox and Matt Oakley to form a power trio. Despite being only a three piece, their sound is always very big and full. Bold and heavy hitting, the throwback sound hits hard early and never wains. With so many evident influences, they find a way to appeal equally to fans of 60s rock like The Zombies, 70s acts like Yardbirds or Cream, to acts from the 80s, 90s, and more. While there’s a heavy dose of old school psychedelia, modern rockers are sure to enjoy the unique blend, as well. The tunes seem to take the listener away to another place… but that’s exactly what Oakley intended:

The tunes contain verses and reverberations meant to transport the listener into a parallel universe that looks and sounds like current day California, only without the sunshine and palm trees arranged in perfect variations like the cover of a million postcards and magazines. It is a collage of barefoot sand, highway speed, LSD sunshine and ominous dusk as I see it. I want the listener to experience the sunstroke, see the beauty and feel the dred of this place where time either speeds ahead or stands dangerously still.

Standout tracks on this 8 song odyssey include the Doors-esque “Desert Shack”, the extremely catchy “Acid Rain”, and the title track “Badlands”. Check out the album on Spotify below: