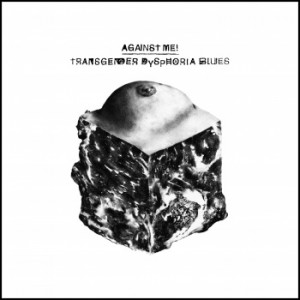 The sixth release, Transgender Dysphoria Blues, from Florida punk rock outfit Against Me! is a hard hitting and deeply personal record.  It is a nothing held back statement from front-woman Laura Jane Grace about her transitioning as a transgender person. The announcement in Rolling Stone Magazine in 2012 where Grace discussed her transgender identity was both controversial and eye opening to fans as well as the music industry. Against Me! has always been a band that tackled issues head on and was unafraid to speak their minds but this was much bigger and much more personal. It was not just a statement on sexual issues but a true to life transition from man to woman as Tom Gable became Laura Jane Grace. The masculine punk rock front-man was now becoming a woman with the same giant voice and dynamic leadership the band has had for over a decade. From the moment of the announcement there were mixed feelings amongst fans and critics but Grace pushed on and wrote this incredible record.

The record starts with the punchy title track that hits the listener with Laura’s personal feelings about becoming a woman. The lyrics are brutally honest about the emotional toll that being transgender takes when trying to be a female despite having male features. It is an intimate look at Grace’s dealings with looks, stares and comments she endured throughout this transition.

Track two is entitled “True Trans Soul Rebel” is a Transsexual anthem discussing the loneliness and isolation that is often associated with having a transsexual identity. The song explores issues of suicide as well as the pain of not being the person you feel you were born as. It also asks the question “Does God bless your Transsexual heart?” which may or may not be a shot at the churches views on the issue. If it is intentional I feel it is a very important question in the ongoing sexual identity debate with in Religious circles and if it is not then I feel it still has merit, as a question Christians should ask themselves. Does God bless people who are Transgender? I think God loves everyone so I would say, “Yes of course!” however, that is likely not a very common view with in the church. It is songs like these on the record that really challenge those who might not be comfortable with Grace’s identity but in true Against Me! fashion, it is laid out and makes no apologies.

On the track “Unconditional Love” Laura writes about her relationship with her wife, who has stayed by her side throughout her transition. The lyrics are again very raw and honest about the fact that even if there is acceptance and unconditional love throughout this process it still is deeply personal and must be faced alone, in many ways. The song also discusses issues of isolation and depression in the third verse “Don’t worry young suicides, the vultures will pick your bones dry”. The issue of teen suicide with in the LGBTQ community is one that has sparked much conversation and an outcry against bullying and bigotry.

“Drinking with the Jocks” takes on the common male stereotype of a beer guzzling womanizing frat guy. It is a very tongue in cheek and very punk rock punch in the face of traditional male roles. While “Osama Bin Laden The Crucified Christ” takes a much more political angle while making reference to Benito Mussolini and his girlfriend Clara Patecci’s executions as well as the crucifixion of Jesus. The song “FUCKMYLIF666” features Fat Mike of NoFX on bass, he also plays on “Unconditional Love”, while Grace plays on the rest of tracks as long time bassist Andrew Seward left the band after 11 years.

The songs “Dead Friend” and “Two Coffins” take on darker themes discussing friendship, love, and dealing with loss. “Two Coffins” is a short acoustic track that breaks up the hard hitting punk driven album before finishing up with “Paralytic States of Dependency” and the anti-music industry anthem “Black Me Out” which is a biting song about some unnamed music executive that Laura definitely has no lost love for.

Overall this is Against Me! most lyrically personal record by far as Laura Jane Grace bears her soul and unapologetically discusses her sexual identity in typical “in your face” punk rock fashion. Musically it is following in the trend of White Crosses with a mix of hard hitting punk rock, straight rock n roll and some acoustic folk rock. It is a mature record that tackles themes that will challenge many listeners especially those who have a hard time with LBGTQ issues. As a Christian and former pastor I found it to be a beautifully honest and open record that takes on the issue of sexual identity in a way that is very important. The bravery that it takes to “come out” in a world polarized by social, political and religious walls is immense. I applaud Grace’s boldness to not only speak out but stand out as a transgender person in an industry and  world that is not  always very accepting or kind to those who do that. This is a record that invokes emotions and causes one to truly think about how they treat people who are different then them. Laura Jane Grace has always been a non-conformist punk rocker with little care for what people think however this record shows the vulnerability of her transition from male to female. It leaves open her insecurities and also exposes her anger as well as her hurt. She rips out her heart in order to give fans and critics a true look at what it is like to be her, even if just for a few tracks, there is no denying Grace’s intention to be transparent.

Beyond the lyrical content this is another solid effort by a band that has proven it’s weight in rock’n’roll over the past decade. They have matured from an anarchist folk punk band into a legitimate rock n roll force. Their fans are loyal and while Laura Jane’s transition may have cost the band some support it is not really apparent as I saw a few weeks ago at their sold out show in Lancaster PA. The music speaks for itself and the lyrics give it something even better. It is genuine. There is no mistaking that Against Me! has become much more than just a another punk rock band, they are leaders now in a scene that often needs one. The band has longevity but also the maturity to grow as writers and musicians. Transgender Dysphoria Blues is another fine example of that growth and I look forward to what comes next from them.

One Reply to “Against Me! – Transgender Dysphoria Blues”