So, I’ll be penning a real review over at Cinapse in the next week or so, but I decided to live “tweet” (I didn’t actually post on Twitter) as I watched the film through. It’s got a bunch of synopsis, but I don’t think it’s really a “spoiler” in any real sense… I cut it down a bit towards the end to avoid any true spoilers and I assure you that the plot points that are “spoiled” are not ruined at all. You need to still make a point to watch the campiness, gore, and fun visuals that make this an instant cult classic. 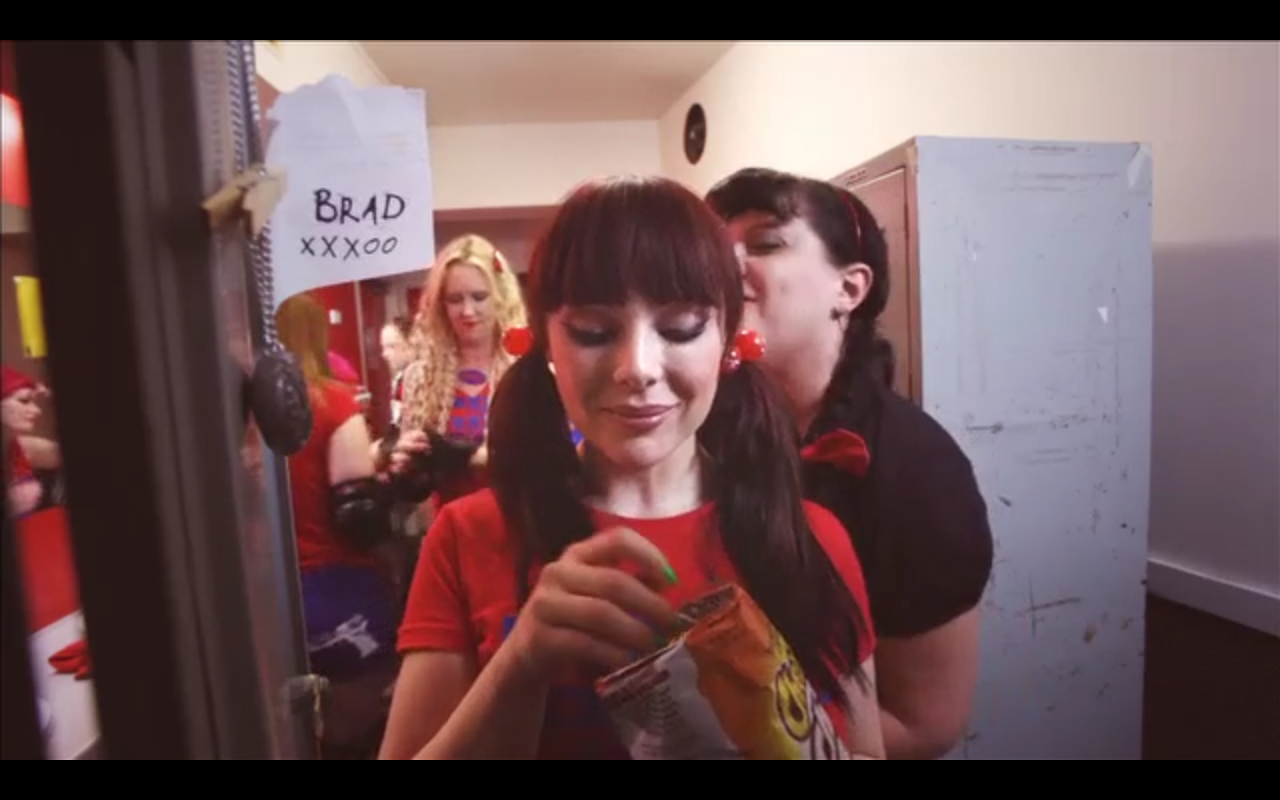 The movie starts with derby girls getting ready for a bout, I dig it.

Bout over, two dudes chatting, including a greaser in dope leather jacket with awful hair. Like AWFUL hair.

After some chatter, including jealous ex-girlfriend in derby gear scoffing at her ex for moving on too fast, it’s time for a punk rawk show.

Dude with bad hair gets laid. That leather jacket must be a total babe magnet because it’s surely not for his looks.

Crazy derby ex-girlfriend bitch goes after the gal who flirted with her ex. Nothing really comes of it.

Oh snap, the ugly hair dude hears a noise. Don’t get out of that back seat, dude! At least finish getting laid before you die, amirite?

Derby girls skating around in parking lot goofing off like derby girls do. The creepy dude is hiding in a tree watching them.

Cute derby gal that the ex was flirting with before puts her headphones on and a cool throwback rock track comes on.

Cool scene of her skating around, looking all cute and stuff… but wait! The creepy dude is following her. 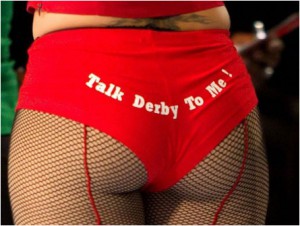 Creepy dude covers the derby gal’s eyes and shows her a vision. Oooh, it’s the origin of the slasher!

PS. Pretty sure the creepy dude is the janitor for the rink.

The ex-dude and the cute derby gal go for a skate after she wakes up from the crazy nightmare, lying in her own bed.

They come upon the dead bodies of the ugly hair dude and his derby gal date… then suddenly… poof… creepy dude appears.

Creepy janitor dude then blames the cute derby gal for awaking a psycho former derby gal… the same one in the weird nightmare.

Oh, I just found out that the ex-dude’s name is Brad. I’m sure they said it before, but I didn’t notice.

Brad’s ex gets all pissy and comes after the cute derby gal at the rink after a practice.

The main gal I keep calling the cute one is named Cherry I think.

Anyhoo, they ran outside and… the demon witch psycho ghost killer is there… and another dead derby gal.

I can’t make out the killer’s name, I guess that’s the problem with Australian accents and a dumb American viewer…

Got it, I’m pretty sure it’s Momma Skate.

Cherry and Brad sticking together while the try to get away. Two other skates with them.

Cherry and Brad and crew split up… dumbasses.

Cherry sees the janitor and follows him. His starts laughing maniacally at her. Then he disappears again.

Oh yeah, somewhere in my last few “tweets”, I forgot to mention at least one more dead derby gal.

Ok, Cherry and Hell are done fighting, cue flashing over to Momma Skate and another derby gal… and… yup.

Oh wait, what? Momma Skate wears blades? What a bitch! Quads are what derby is all about, who the hell does she think she is?

And with said blades, she stomps on a derby gal’s head. Maybe that’s why… maybe she can do more damage with rollerblades.

Back to Cherry and Hell. Fight reignited. And… guess what happens next… it’s Momma Skate time!

Janitor has a plan. He talks to Cherry and he starts painting blood on the rink. Not sure what the hell his plan is at all.

Ummm, k… something happening on the rink, where the blood was painted I think… a portal?

Best line in the movie so far, “Don’t take this the wrong way, but why aren’t you guys dead?”

Blood and guts and derby, oh my!

More dead derby gals. I can only assume Cherry is gonna save the day, right? Or wrong? Wait, what is happening here?

So confused… is this the afterlife? A dream? A nightmare? Huh?

AH! THE UGLY HAIR DUDE IS BACK!

Wait… now we’re back in reality? Or…?

Oh, so the portal thingy was something different… he drew something else completely on the rink… let’s see how this works…

Wait, does this mean it’s over, is Momma Skate really gone now?

Nice. And that’s the end, folks! 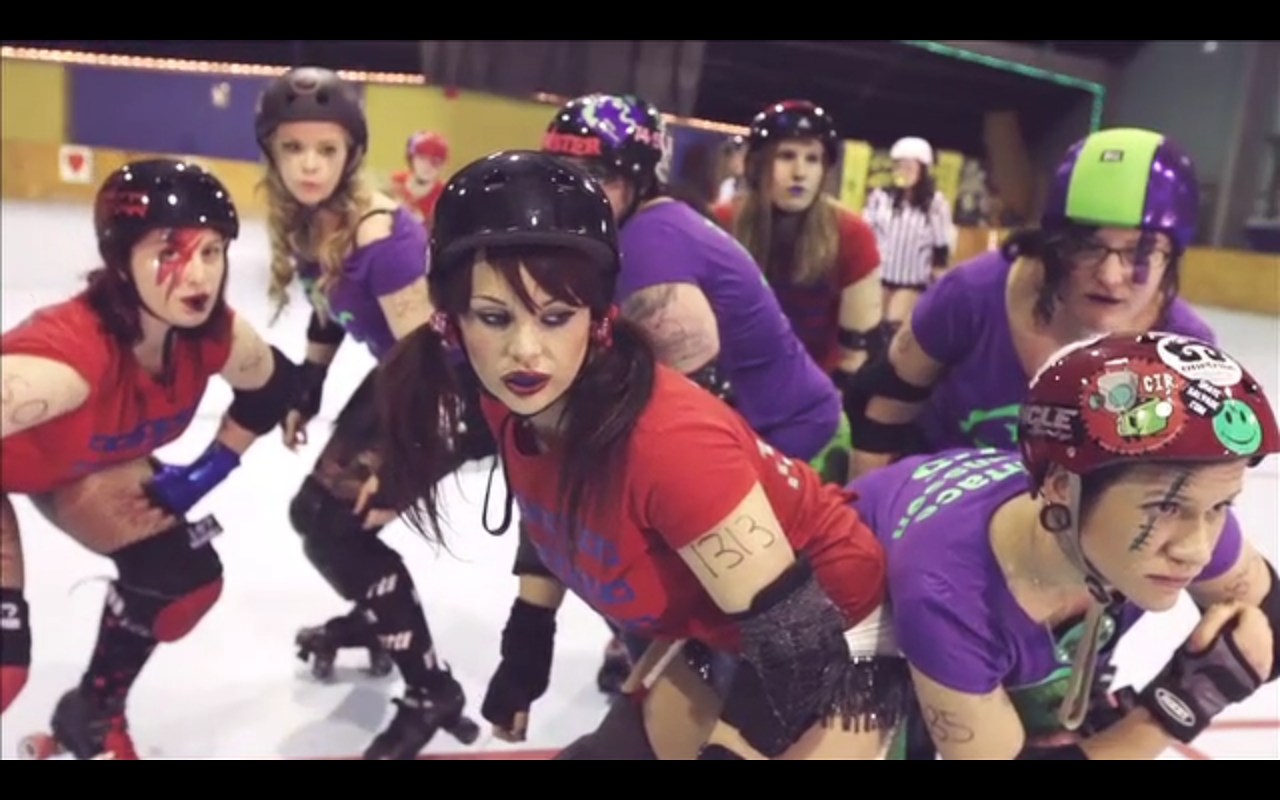