Introducing a new column today, Two of a Grind. Like Stream a Little Stream, I’m going to make some streaming suggestions for you to enjoy. Unlike, Stream a Little Stream, I won’t make suggestions from a variety of services, focusing solely of The Grindhouse Channel, and I’ll exclusively be choosing films I’ve seen (I think). While services like Netflix, Fandor, Tribeca Shortlist, and Amazon have movies from all genres, The Grindhouse Channel has a specific focus, much like Shudder does. Whereas Shudder is all horror, The Grindhouse Channel does branch out into a few genres, the caveat being that the films are all grindhouse style films. If you’re unfamiliar with what the therm means, here’s what Wikipedia says:

A grindhouse is an American term for a theater that mainly shows exploitation films. According to historian David Church, this theater type was named after the “grind policy,” a film-programming strategy dating back to the early 1920s, which offered continuous showings of films at cut-rate ticket prices that typically rose over the course of each day. This exhibition practice was markedly different from the era’s more common exhibition practice of fewer shows per day and graduated pricing for different seating sections of large urban theaters.

Due to their associations with attracting a lower class of audience member, theaters operating on grind policies gradually became seen as disreputable places showing disreputable films, regardless of the sheer variety of films (including subsequent-run Hollywood films) that they showed.

Currently a channel for enjoyment on Roku, you can watch for free with commercials or get to watch 100% commercial free for a mere $3.99 a month. As the platform expands, paying customers will have all types of added access and bonus members only functions, but you can hear more about that on the upcoming episode of The Farsighted Podcast.

For now, whether you choose to pay or enjoy for free with limited interruption, here are two selections of films that I watched recently on the channel. 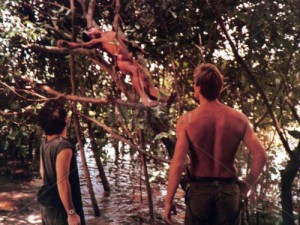 Natura Contro aka The Green Inferno aka Cannibal Holocaust II

Naturally, a cannibal film directed by Antonio Climati, the DP of several Mondo films, is expected to be brutal and savage. Bearing one English title associated with the recent Eli Roth cannibal film and another tying into Cannibal Holocaust as a sequel, the actual title translates in English to “against nature” and the scene pictured above is basically as brutal as it gets. In other words, it’s not nearly as gruesome as you’d expect when considering the associations with Mondo and the cannibal film that got Ruggero Deodato arrested for allegedly murdering people on film.

This film is listed in their action section on the channel, which initially felt off, as I assumed it was more of a horror. While there are certainly horror elements, it’s hard to associate this film with the infamous cannibal films of the early 80s. It really is more appropriately in the action section than the horror section. Don’t take my word for it, though, read what the cannibal experts at Who the Real Cannibals Are:

Due to this such a late entry in the cannibal genre, it doesn’t follow by the genre rules at all. Gore is kept to a minimum throughout the movie, even when a scene seems to call for it. An attractive female lead character goes the entire film without showing any nudity (and this is despite the fact that she has a shower scene. The screenwriters presumably had nudity in mind when they wrote the script but for whatever reason the scene reveals nothing of the actress in the actual film.) Lastly, animals many times (though not always) go through an entire scene in Natura Contro without being harmed (though this last one could be considered a good thing by many viewers).

They think it’s “surprisingly bad”, but I sorta liked it. The film ‘s lack of excessive brutality could likely be why, seeing as the cannibal genre is often too over the top for me. For someone who wants to put a toe into the waters if the cannibal film, this may be a film to use to do that… or you could dive right into the bloody mess of Cannibal Holocaust and try to keep your dinner down. I suggest wading in more slowly with Natura Contro, which any Roku user can watch for free on the Grindhouse Channel.

Attack of the Monsters 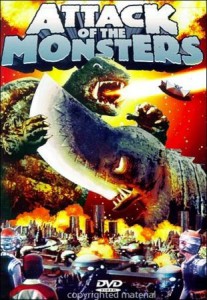 Attack of the Monsters is a classic 60s Kaiju film from Japan, the fifth film of the original Gamera series. If you’re not too familiar with the kaiju subgenre, you’re at least familiar with Godzilla and the numerous films, both foreign and domestic, about the fantastic beast.

Another recent Hollywood trek into kaiju you are likely familiar with is Pacific Rim, which is pretty great and pays homage to the subgenre in many ways. However, the original films of the 50s and 60s have a certain tone and feel that really sets them apart as something special. Attack of the Monsters is at the tail end of this classic kaiju era but still captures that charm. It is cheesy and fun, as the subgenre should be; and, it has some great monster battles. Oh, and if you didn’t already know, Gamera is a deadly giant flying turtle!

Sidenote to others who grew up in the 90s, like myself… if you haven’t watched many kaiju films, watch this one and take note of the influence the battles of this subgenre influenced the final battles in Power Rangers episodes. The influence and borrowed style is undeniable.

So, there you have it folks, the first of many entries in your new weekly guide to the sleazy, schlocky, cheesy, and fun. Two at a time… kinda like Noah and the ark, but not really.