Say what you will about 2016, at least The Criterion Collection continued to do the Lord’s work. They continue to be the gold standard by which home video releases are judged with their fantastic restorations and copious extras.

Here are the seven best Criterion Blu-ray and DVD releases of 2016. 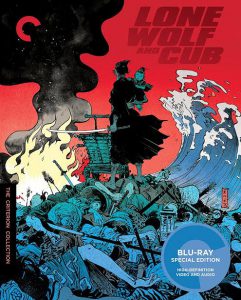 The Criterion Collection has always put as much love and care into weirder, offbeat cult and genre films are as they do in the classics and arthouse stuff. It’s an invitation to reappraise and discover the greatness in films which tend to get ignored and left off the more respectable Canon. This is what cinephilia is all about; an omnivorous passion for film.

The Lone Wolf and Cub films, based on the manga by Kazuo Koike and Goseki Kojima, follow Itto Ogami, the Shogun’s executioner who becomes an assassin on the path to vengeance after he is betrayed and his wife murdered. He around 19th century Japan as an assassin-for-hire, pushing his young son Daigorō in a baby carriage. The films are an absolute blast, with inventively staged swordplay, gleefully over-the-top spatter, and adorable acts of reckless child endangerment. Criterion’s boxset includes all six films, and even throws in the English-dubbed 1980 American release Shogun Assassin which re-edited and condensed the first two films Sword of Vengeance and Baby Cart at the River Styx. The addition of Shogun Assassin is a great little bonus, it was my first introduction to Lone Wolf and Cub, through the RZA’s sampling of the film’s dialogue on GZA’s “Liquid Swords” album.

6. Dr. Stranglove, or: How I Learned to Stop Worrying and Love the Bomb (Spine #821, dir. Stanley Kubrick) 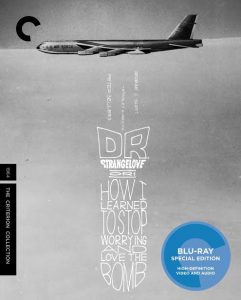 Kubrick’s best film (sorry, not sorry) gets the royal Criterion treatment it deserved. From the cover design based on Pablo Ferro’s hand lettered titles, to the booklet designed as a reproduction of the film’s Attack Plan R manila envelope (completed with the “one miniature combination Russian phrase book and Bible”) Criterion’s Dr. Strangelove release makes a strong case for the continued value in physical releases. The film itself, with its new 4K restoration, looks pristine. Gilbert Taylor’s stark grainy black and white photography gives Dr. Strangelove a documentary feel, which only amplifies the blacker-than-black-comedy of war portrayed as sexual dysfunction.

A beautiful looking film with a pessimistic tone about violent nature of capitalism, Robert Altman’s 1971 revisionist western gets richer with each repeated viewing. This is one of the great films of the New Hollywood era with a couple of big stars (Warren Beatty and Julie Christie) giving some career best performances, and a wonderful score by Leonard Cohen. With its hazy look, and intentionally underexposed negative, Altman’s wandering, digressive camera captures striking impressionistic natural beauty juxtaposed with the squalor of Presbyterian Church, a frontier town that sprouts out of the wilderness throughout the course of the film, nestled in the mountains of Washington.

I love Robert Altman’s loose, wooly method of shooting dialogue. Characters and extras talk over each other, partially obscured by environmental noise, often with multiple conversations happen in the same space at once. Altman weaves together important dialogue, stray observations and small talk together, treating it all with the same air of nonchalance. It makes repeated viewings a necessity. 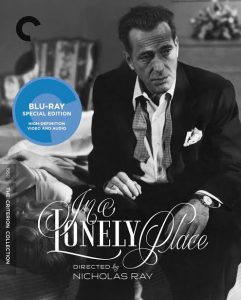 It’s about time Humphrey Bogart made it to the collection. Somewhat surprisingly this is the first film starring the screen icon to join the Criterion Collection. And it just may be his finest performance, as a self-destructive alcoholic screenwriter who is a prime suspect in a murder. Gloria Grahame plays the down-on-her-luck actress who steps in as his alibi, and soon love interest. But doubts about his actual innocence soon begin to creep in, poisoning the affair. Director Nicholas Ray spins the glamorous self-created fantasy of Hollywood into something darker, full of wild-eyed desperate loneliness. In a Lonely Place is a deeply fatalistic love story with one of those perfect Old Hollywood endings.

Blood Simple was the Coen’s first film, and it still ranks as one of their best. Its complex plot of adultery, murder and miscommunication has all the Hallmarks of the Coens, with simple misunderstandings and small transgressions spiraling out of control, getting worse for the characters with each attempt to right the wrong. The dark, Texas-set neo-noir is thick with sweaty atmosphere, and looks incredible with its neon glow and blue shadows. You can practically taste the dust in your mouth, and smell the fish left to rot on bar owner Julian Marty’s desk. Frances McDormand, John Getz Dan Hedaya are all fantastic, but M. Emmet Walsh, as the sleazy P.I. Loren Visser is a force of nature. It’s not a performance easily forgotten.

Herk Harvey’s single feature film has long been a part of the collection, but a high definition upgrade was long overdue. Criterion’s 4K glorious new restoration alone is worth the price of admission, but Carnival of Souls is jam packed with extras – some new, some carried over from the original DVD release – that contextualize and contribute to a deeper appreciation for the film. There are deleted scenes, outtake reels, scene specific commentary tracks by Herk Harvey and screenwriter John Clifford, a couple documentaries on the film’s production and enduring cult following, visual essays, interviews, and even excerpts from Harvey’s Centron industrial films. 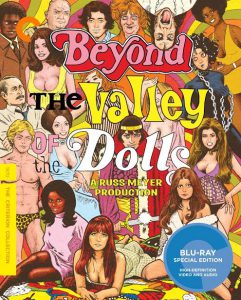 Russ Meyer’s Beyond the Valley of the Dolls is one of the great cinematic sleight-of-had trick of art-cum-trash. Here he, and screenwriter Roger Ebert (yeah that Roger Ebert; his only screenplay, but what he does with language here is amazing) collapse all distinction between highbrow art cinema and exploitation. It’s trash, elevated to art, and art degraded to trash. It’s a post-modern, pop art explosion. A vibrant collage of 1970 culture and Meyer’s own auteurist predilections. He does away with linear narrative structure, compressing time and space through innovative montage edition, piling storyline after storyline on top of each other, creating weird tangents to spin off into by juxtaposing images. And it all happens at a breathtaking, delirious pace. It’s got rock and roll, counterculture gurus, drugs, Nazi fetishism, sex, violence, sexualized violence, and Meyer’s ever-present large breasted women. It’s a sly satire of the Hollywood dream of pop stardom that turns into something far weirder and sinister. It’s a great film, and an enormously entertaining one as well.

In a word, this is my happening and it freaks me out.

One Reply to “The Cinephile Files Special Edition: Counting Down the Top 7 2016 Criterion Releases”