“Sex! Guts! Blood! And all men are mothers!” – the rally cry of The Man-Eaters

Herschell Gordon Lewis didn’t just bring the genre of gore to America, he expanded upon it over and over again as he rapidly developed his craft – I haven’t mentioned this in the series yet, but the previous 8 films were all made over a 4 year period between 1963 and 1967. And those aren’t even the only movies he made in that time! According to iMDB, he made 17 films in that time (some uncredited, some short films, but a ridiculous output none the less). But what has he learned in that time? What insight about his voice as a filmmaker did he gain during all of that work?

We’re finally in the back half of the 14-film HGL Feast Box Set from Arrow Films, and with She-Devils on Wheels, ol’ HGL finally steps out of his comfort zone to deliver something truly new (for him): a movie about women. It turns out, what Herschell learned in those 4 years was that people were a bit perturbed by his insistence on abusing women in his films. I’ll do my best to accurately describe his tone when explaining why he made this film in the intro from the box set:

*in his usual, calm salesman voice*

As my reputation as a gore-meister grew, I constantly was asked…

*speaking quickly, in a high-pitched voice meant for mockery, and obviously annoyed at the sentiment that will follow*

Why do you always chop up women? Why don’t you chop up some men?

She-Devils on Wheels was the answer. 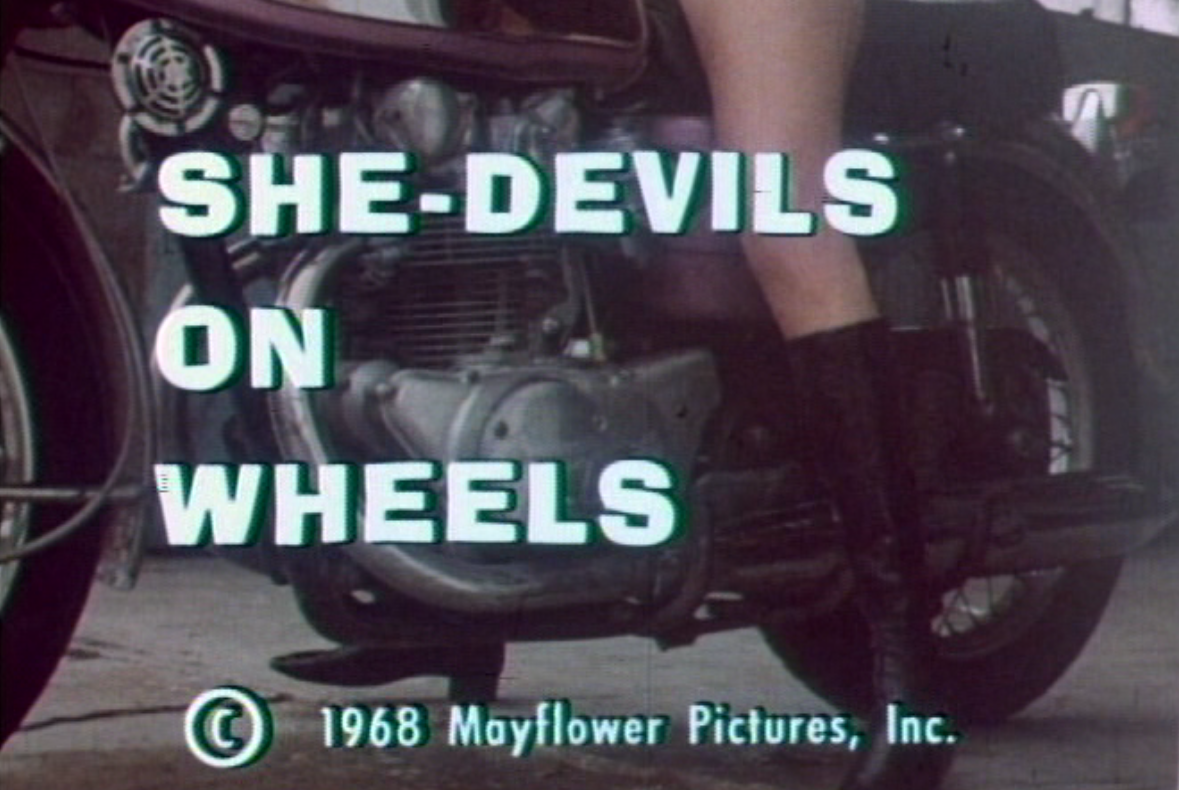 Lewis clearly is not a fan of the notion that he was pointlessly murdering women on screen all the time, potentially participating in a toxic, masculine culture. And his response to that was to make a female-centric movie that only he could make – one in which a female biker gang known as The Man-Eaters races for dibs on potential sexual partners, has seemingly nightly orgies with a group of men that eagerly follows them around hoping to be one of those sexual partners, and violently punishes any man that crosses them, be that by abusing one of their members or simply by being crushed on by one of their members, which is strictly forbidden in the The Man-Eaters. I have no idea if women would feel good about their representation in this movie, but I can tell you it’s kind of a blast, as it often is when you let women actually be in charge of their bodies and their sexuality.

There’s not much of a plot to this movie – it’s more a series of B plots about various women in The Man-Eaters, which all culminates in a turf war of sorts between them and a gang of men that races cars rather than motorcycles. There’s a story about Karen, a member of The Man-Eaters that catches feelings for one of the men that are slobbering at their heels and ultimately seems like she may want out of the gang. There’s Honey Pot, aptly named as she seems to be a teenager in their ranks that they haven’t initiated yet, but eventually do by allowing (making?) her to have group sex with all of their follower-men at once (which they literally refer to as a “train”). And there’s Queen, leader of The Man-Eaters, with the fiercest fashion sense of maybe any movie character I can think of (at one point wearing a suit made strictly of sparkles, including a crazy sparkle-hat, and always wearing a bike chain as a belt) and a true hatred of men who leads The Man-Eaters into battle with the gang of hot rodders. The movie sort of juggles these stories as it builds to the bikers vs hot rodders finale, and while a little slow (as I’ve come to expect from Lewis’ movies) it really is entertaining in a way a lot of his movies aren’t – there’s an energy to this that most of his movies do not have, and it can clearly be attributed to the cast of women that are having a ball getting to lead a movie like this.

In the intro, Herschell said he demanded they cast women that were riders first, actors second. I think that’s of great benefit to this movie – you always know it’s these women riding during the action scenes, and they bring that physicality into all of their scenes. They’re loud and lively and fun to spend time with, even when they’re wantonly beating the shit of a helpless man. There’s no denying the power of those images, even if they’re coming from a skewed perspective. Herschell also steps up his filmmaking game, going for a much more colorful movie with denser images. Perhaps that was another thing the women brought to this film that he wisely captured – the opening motorcycle race is the most colorful scene in his movies so far by a long shot. And he lets the colors be bright and clash with one another, creating a sort of chaos and anarchy that fits The Man-Eaters well. 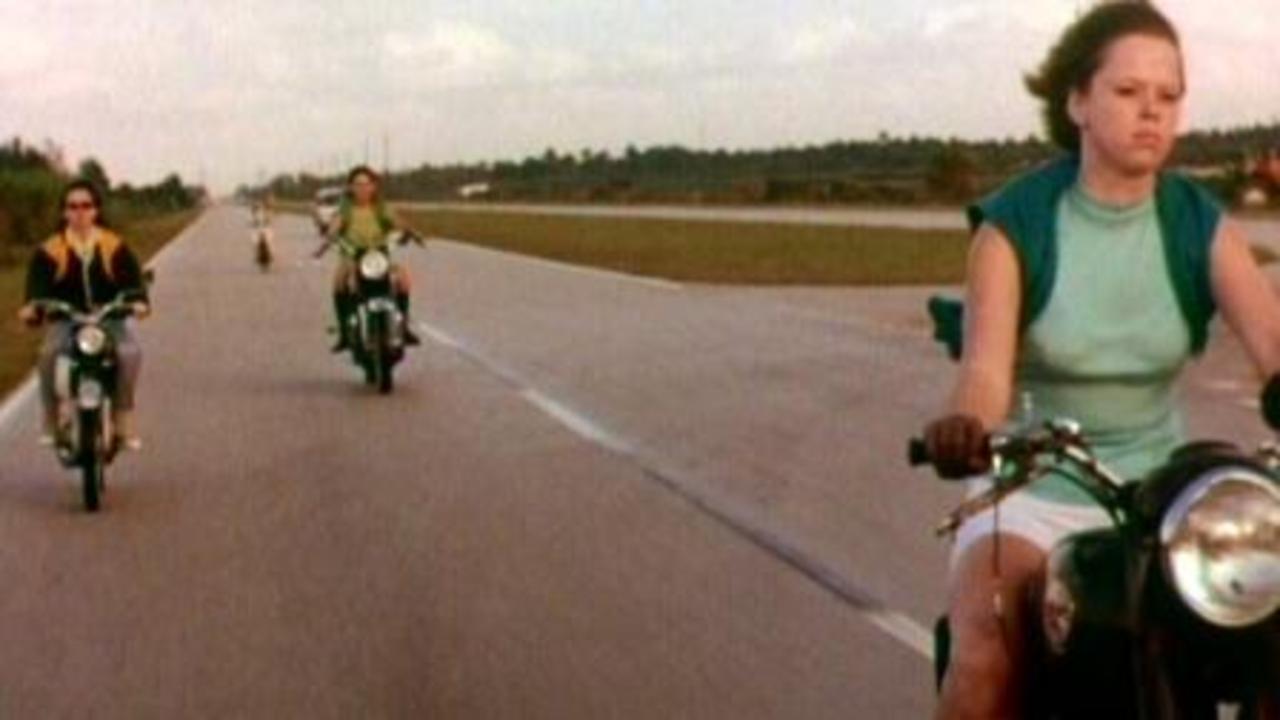 There are two noteworthy sequences in this movie, sort of for the same reason, though one is a bit more complicated as far as the gender narrative I’m toying with here is concerned. About halfway through the film Queen catches onto Karen’s affections for Bill, one of the men that The Man-Eaters are always bossing around and making fun of as they decide whether these men are worthy of their sex each night. Any sort of real affection for men is forbidden in The Man-Eaters, so Queen puts Karen’s loyalty to the test – The Man-Eaters kidnap Bill, beat the ever-loving shit out of him, tie him to the back of Karen’s motorcycle, and tell her if she doesn’t drag him around she’s out of the gang. It’s clear she really does have feelings for Bill and it makes the whole scene rather heartbreaking and paints the women as bullies to one another, an unfortunately common and poor representation of women. What may save this scene is that in the very next scene, The Man-Eaters are partying again, and Bill is there, with his face looking like hamburger meat, grinning from ear to ear just happy to be considered for more more sex. This depiction of men as lothario numbskulls is so funny it lends a bit of satire to the proceedings that sort of softened some of the foolish “girl-power, as depicted by men” complications of the narrative.

But the sequence that I think everyone will agree is just awesome, and brings us full circle into the splatter of it all, is the finale. The Man-Eaters run afoul of a gang of hot rodders that only see weak women to be abused and taken advantage of. After doing just that to one of The Man-Eaters, our gang of girls chases them down and violently beats the be-jesus out of the whole gang. Queen removes her bike-chain-belt and wraps it around her fist to pound their faces into a splattery pulp while the rest of The Man-Eaters start curb-stomping everyone like crazy. It comes to a half-conclusion when The Man-Eaters all start unbuttoning their pants as they straddle the pile of hamburger-meat-men and it’s heavily implied they then piss all over them. It’s amazing. I call it a half-conclusion because there’s a brief cut to black just before the pee-party begins, which we return from almost instantly as two of The Man-Eaters lead one of the hot rodders into a trap: they run a tight wire between two telephone poles across a stretch of road, then get one of the hot rodders to ride a motorcycle through it, decapitating him in what is one of Herschell’s best FX sequences. It’s glorious, cheap, and hilarious, and is definitely what this movie is remembered for.

She-Devils on Wheels may have been a reactionary “See! I think women can be powerful too!” move on Herschell’s part, but it does let these women be powerful and is extremely entertaining when it’s doing so. It’s not that its representation of women is perfect, far from it really, but it’s more that it’s allowing women to have power at all in an era of cinema, and a genre of cinema, where that was rarely the case. And it turns out part of what matters about splatter is that its so visceral it can be used to bring characters down or raise them up, depending on the context you employ it within.

I’ll leave you with this incredible surf-rock song that serves as The Man-Eaters theme and contains the following lyrics: