Termitator is a 2017 mutant creature gore horror film short by Camille Monette Roxane De Konick and Keenan Polocsak. The plot deals with four friends who go to a cabin in the woods for a weekend of partying but end up meeting bloody ends by the title creature.

I went into this sight unseen not knowing much about this outside of a short writeup on the web page that the video was on. It led me into thinking this was going to be another run of the mill backwoods mutant creature on the loose with a few gory kills. That notion was shattered 15 minutes later after watching because what I was treated to was a funny, nasty, very un-PC like gory horror comedy this side of Dead Alive!

To some there may be a few drawbacks to Termitator. First, either due to its short running time or by design we don’t get much fleshing out of the four doomed people. Second, the film is not in English. As for me, who is a huge gorehound and foreign horror film fanatic at the same time, these are non issues. Third, a few of the death pieces may offend certain people but again if taken in its proper context they can be view as quite funny (the film within the film that the characters are watching as we first meet them has a nice close up over the top death by chainsaw that turns out to be a nice role reversal that girls may love and most men may cringe at). 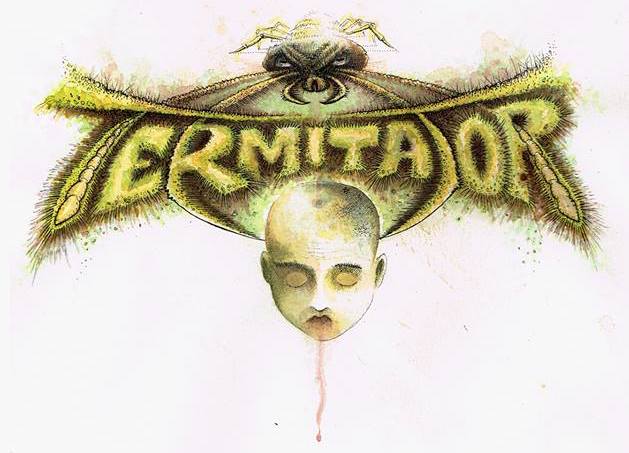 On the plus side we have very gory old school practical effects and no trace of digital overlays. We got some nice nudity. The humor feels natural. The creature is one ugly mofo and its suit isn’t some cheaply made looking one at all and that tells me that the makers knew which elements of the film to spend most of the money on.

Overall, my judgment is that Termitator is a love letter to gory low budget horror films of yesteryear and I highly recommend you seek it out and watch it. Check out more info on the film at the Facebook page!