I love horror, and in turn I love to acquire horror experiences across all forms of entertainment, whether it comes in the form of watching a movie, reading a sweat inducing novel, playing through the latest horror video game, or partaking in a haunted house or horror themed attraction around Halloween. The horror community has no shortage of entertainment options to choose from. In my case, I have become quite fond of one avenue of entertainment that brings some unique experiences that can’t be had anywhere else, and that is witnessing horror through live stage performances. Over the years, I have attended either off-broadway productions of classic horror movies, such as Evil Dead: The Musical and Re-Animator: The Musical, spoofs of Academy Award winning horror such as Silence!: The Musical, based on the Anthony Hopkins/Jodie Foster thriller The Silence of the Lambs, and even original productions with strong horror connections, such as the exquisite Nevermore: An Evening with Edgar Allen Poe, a marvelous stage recalling the life of Poe through his own words, masterfully portrayed by horror legend Jeffrey Combs. I am always ready and willing to experience horror in any form of entertainment possible, and I have found that the live stage has brought me some of the most personal life experiences I have ever had. A few weeks ago, I got wind that the successfulLondon stage revival of the classic ghost story The Woman in Black was going to be doing an eight-week run of performances at the sleek and cool McKittrick Hotel (530 West 27th St) in New York City. After learning of this and reading that the play was essentially a two-actor performance that weaves in and around the audience in attendance, I knew I had to check it out. I scooped up two tickets for me and my lady, for the January 19th performance at 7:30pm. After attending multiple memorable live stage performances across a wide array of horror-related topics, could The Woman in Black live up to my lofty expectations?

​The Woman in Black, first published in 1983, was written by author Susan Hill and is as classic a ghost story as one can imagine. The story follows one Arthur Kipp, a young solicitor full of energy and vigor at receiving his first major job opportunity. He must travel to the Crythin Grifford, a small seaside English moor town, to settle the affairs of the recently passed Alice Drablow and her estate of Eel Marsh House. As soon as he arrives in town, however, there is a certain dread and fear that has gripped the town in relation to the Eel Marsh House, as they believe it is haunted by a gaunt-looking woman in an elaborate black dress. As Arthur begins his task, strange sounds and occurrences begin to manifest in and around the old house, and he too begins to see the woman in black. What mysteries does this house hold and will Arthur be able to survive the horrors that are brewing within this truly cursed establishment? I will not reveal anything more as it would lead to spoiler territory but suffice it to say that The Woman in Black is a great haunted house/ghostly apparition tale that delivers on the chills and terror that one such story should evoke.

​The Woman in Black live stage performance at the McKittrick Hotel is right up there with last year’s Jeffrey Combs’ masterwork Nevermore: An Evening with Edgar Allen Poe as one of the most atmospheric events I have ever attended in my brief horror theatrical career. According to its website, the McKittrick Hotel was once a grand and vibrant hotel that was completed back in 1939, with the intention of it being the finest and most luxurious hotel in New York. However, around six weeks before it was set to open, and a mere two days after WWII had begun in full swing, the hotel was unexplainably condemned and permanently sealed from ever taking in a single guest. Now, the hotel has been re-opened and has added a plethora of elaborate shows and engagements spread across its unique and riveting ballrooms, bars and gathering spaces. One such room is the Club Car, an intimate room/bar that serves as an entertainment space for musical and stage performances. The Club Car is like being thrown back into the 20’s/30’s heyday of elaborate costume parties, grand ornate designs and a smoky, seemingly illicit feeling of style and sexiness. This is where The Woman in Black stage play was performed, and they couldn’t have chosen a better location.

I’ve never read the book, but learned that this version of the story was slightly different from the book itself. While the story involving Eel Marsh House, Arthur Kipps and the haunting is all very much the same, a different perspective was weaved in as the main storyline of the play. Arthur Kipps is now an older man who feels a burning need to tell the story of what happened at the Eel Marsh House to a wide audience and has decided to facilitate this wish through the theater. He has enlisted the help of a stage actor, who remains nameless, to get his message across to the people. These two individuals act out the entire story of The Woman in Black, with each actor portraying the various people that are involved in the story (I’d say around five to six parts between the two), plus a mysterious woman left to play the enigmatic Woman in Black. The stage is very minimal, consisting of a trunk, some chairs and curtains hiding another room that will be utilized later in the play. The entire performance is meant to take place on the London stage where these two people, Arthur and the actor, are performing the words that Arthur has provided, but through the use of lighting, sound and simple imagination, they brilliantly capture the feeling of being lost amongst the fog and dreariness of the story’s main setting, Crythin Grifford. The fact that all these factors that go into making the stage feel alive are well known by Arthur and the actor, as they are manipulating the stage effects and presence with the actor giving snap cues to the mysterious “man behind the curtain”. It’s like peeking behind how a stage can be transformed into whatever your imagination can muster, with a little assistance from the theater itself. 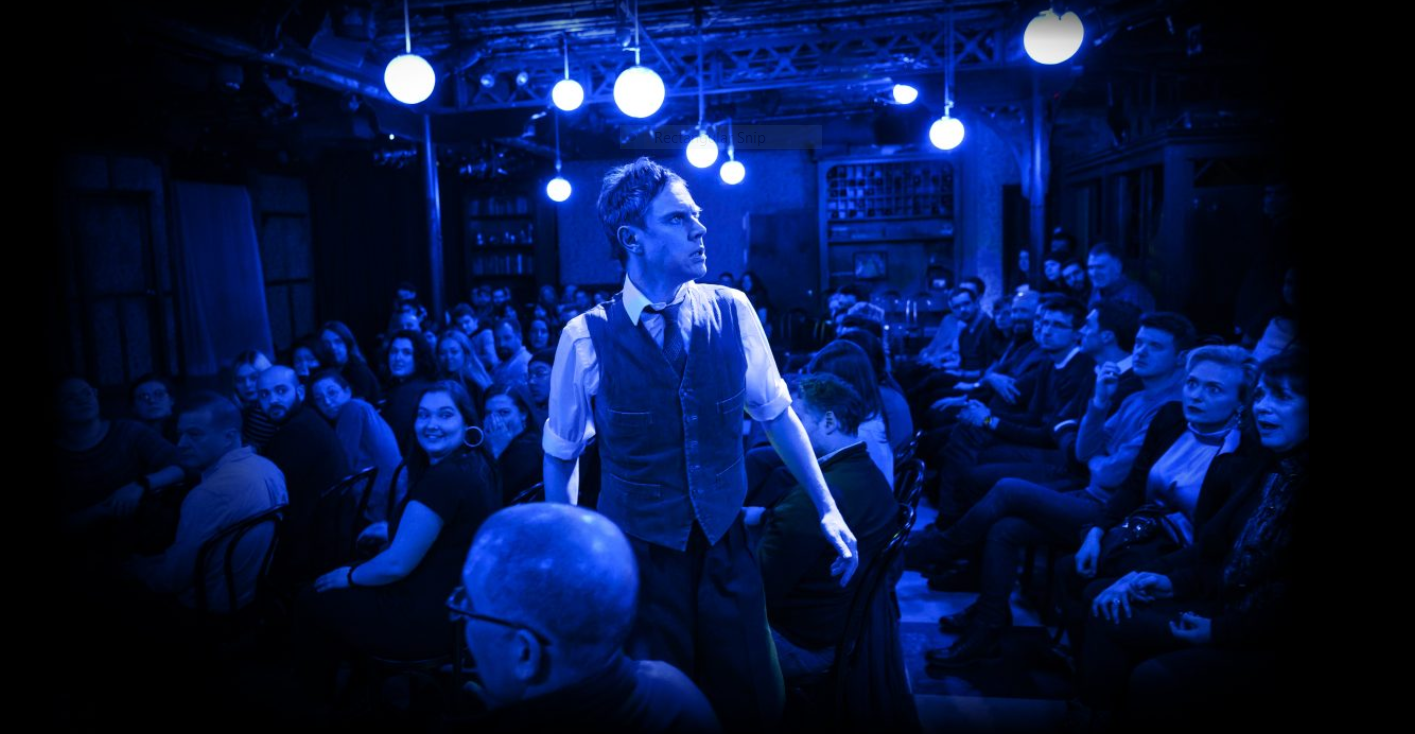 The performances by the only two actors in the show are simply marvelous. David Acton and Ben Porter, two supremely established British stage actors with a litany of credits to their names, who are also the originators of the original London run of this production of The Woman in Black, deliver strong, fun and warming performances as Arthur Kipps and The Actor, respectively. David Acton beautifully translates the haunting experience that Arthur lived through in years past, while still finding the humanity to have some brilliant humor pieces sprinkled throughout, none better than the opening where The Actor is trying to give notes to Arthur on how to properly tell a story on stage with gusto and charisma, which for a time ultimately is to no avail. Ben Porter glides and commands the stage at every turn, as one should playing essentially the only trained actor in the story and does a wonderful job at portraying the young Arthur, displaying the fear, tension and nerve shredding that he endures while working at the Eel Marsh House. The actress who plays The Woman in Black was also quite haunting and took part in more than a few jump scares that really got under my skin, especially with the assistance of the classic 30’s environment of the Club Car, the impeccable lighting usage, constant illumination shifts to total darkness and back again, and a nice subtle use of music and sound effects (one startling screech during the train scene early on made me jump out of my seat). The actress is uncredited in the playbill and I can’t find her name anywhere in marketing material, but in the context of the play and what transpires, I do see the reason for this. The Woman in Black even gets a unique curtain call at the end that was simply perfect in every way. Credit must also be given to director Robin Herford for displaying a dazzling sense of ingenuity in making such a small production feel bigger and more grand than it had any right to considering the minimalist stage props and effects, but placing this performance in a pub environment, on top of being a pub with such a haunting and classic feel, was the right move.

If you happen to live in New York or are visiting this great city in the next few weeks and have a real affinity for horror and live performances, I really can’t recommend enough for you to check out The Woman in Black at the McKittrick Hotel. A great structure that lends itself wonderfully to the setting and environment of the Club Car room at the Hotel, led essentially with pitch perfect performances from David Acton and Ben Porter in this two-man stage show (with haunting support from the uncredited woman playing the titular ghost apparition), brilliant use of lighting and sound combined with the atmosphere of the setting, plus a lean and engaging performance time of around two hours, all combine to make this an unforgettable night at the theater. Sit back, grab a scotch, and prepare to feel dread.