As I mentioned in my inaugural article for Scariest Gaming Moments, the advent of 3D gaming with the release of the Sony Playstation, Sega Saturn, and Nintendo 64 led to the introduction of a grand new world of horror gaming. We could now walk around fully realized 3D environments, experience terror and scares that just weren’t possible on the systems of old, which predominantly consisted of flat, 2D gameplay styles. Resident Evil, from 1996, really brought us head first into this world of nightmares that was awaiting the average gamer, solidifying the genre of “survival horror” along the way, and developers and publishers alike were keen to jump on the bandwagon. Over the years, countless RE-style knockoffs would get released, and while some ended up being worth your time to some degree, most ended up being just pale imitators that didn’t fully understand what Resident Evil was doing correctly to elicit the reactions it was so justifyingly receiving. In February of 1999, however, a game was released that truly upped the ante in terms of getting a player to feel at unease, constantly shivering with the monstrosities that could be around every corner, and felt like a true step into the world of cerebral horror. That masterpiece was Konami’s Silent Hill. While you could literally pick out numerous moments and sequences across this landmark horror title, I decided to discuss the one that has continued to be lodged in my brain to this day. Submitted for your approval, I give you the Midwich Elementary School section of 1999’s Silent Hill.

Harry Mason is a loving father driving on an isolated highway with his young daughter Cheryl, when all of a sudden, a mysterious individual crosses in front of their car, causing them to swerve off the road and crash. When Harry awakens, complete with an ash-like snowflakes and thick fog surrounding everywhere he sees, he sees that his daughter has disappeared from the vehicle. Harry makes his way to the nearest town, the sleepy inlet of Silent Hill, in pursuit of finding his daughter’s whereabouts. After chasing what he believes is his daughter into an alleyway, the true nature of Silent Hill finally reveals itself. A blaring siren erupts through the town, and suddenly the quiet small town vibe that was originally present deteriorates into the stuff of pure nightmares. Monsters, ugly metallic walls and ceilings, blood and viscera and everything that would make your stomach churn push out from beneath the normality. As Harry is fighting off the monsters and is about to be taken over, suddenly, the siren wails again, and all returns to normal. As Harry continues his search through the town, he comes upon a letter that appears to show a drawing that resembles Cheryl’s handiwork, and a note saying “To School”. As night envelopes the town, Harry takes heed of the clues he has found and makes his way to the Midwich Elementary School, the place that will truly make this a personal nightmarish experience. 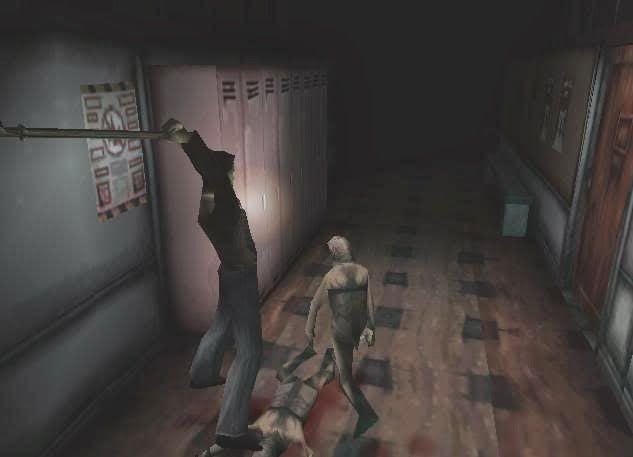 The most pressing question one would ask about my choice here is “Why choose the school above any of the section in the game?”. Silent Hill is chock full of memorable monsters, characters and locations that truly deliver on the horrific elements and mental anguish that the story is trying to convey. I mean, a separate case can be made for the entire Alchemilla Hospital section as Silent Hill’s coup-de-grace horror sequence alone. However, the true unease and feeling that I got from playing the Midwich Elementary School part won me over. The minute you enter this place of learning, everything feels too quiet and tranquil. The halls are dimly lit, classrooms and offices are empty of anything living or dead, and you immediately get a feeling of something being quite off. Then, all of a sudden, you enter a long hallway and are prompty greeted by gray skinned creatures brandishing knives. They seem like a pushover as long as you keep them at a distance, but there is something else about them that makes me feel disturbed at their presence. These creatures are small in stature, coming up to about your waist. These monstrosities also only appear during the school section of the game. Don’t these small vicious creatures come off as… child-like? The mere thought of these things being children that have fallen to the evil of the town, and are now attacking you with knives, which in turn force you to retaliate in defense, truly makes every encounter a horrifying moral dilemma.

The entire Midwich Elementary School section is a great sequence that encapsulates what makes Silent Hill one of the all time great horror games. The entire section can take anywhere from 30 minutes to an hour depending on your play style, ability to solve puzzles, combat efficiency, etc. Encompassing two main floors, the basement and the roof, there are a variety of rooms to visit, whether it be classrooms, offices, bathrooms or science labs. All of these rooms contain either ghoulish child monsters, items you need to complete your mission, complex puzzles involving piano keys or clogging a drain so that water will push a key down to the courtyard, and so on and so forth. As you progress through this seemingly normal looking school, albeit with blood splattered everywhere and monsters around every corner, the game takes a turn about halfway through when you solve a clock puzzle in the courtyard. As you enter this small area, climb down a ladder and exit, you find yourself back in the same main playground area you just left, but something feels off, and it’s not just the enormous cult symbol now residing dead center of this once normal courtyard. You are still in the same school area you were before, but everything has turned into a rust colored metal hell of blood, entrails and disturbing imagery, very similar to the changeover in town that you had witnessed earlier in the game. On top of that, all the doors that you unlocked and areas that you searched are now restarted from scratch (it’s worth note that the map system has a design where sections are marked off and doors labeled as opened/locked depending on if you interact with them – that is all reset after this change). As you re-traverse through this twisted version of the school, you finally end up at the final boss of this section, referred to as either Split Head or Large Mouth, which is a grotesque dog-like creature with it’s main attack involving its head splitting into two and trying to devour you whole. Perhaps that newly found sawed-off double barrel shotgun that you acquired in your search throughout the school will come in handy in ending this foul creatures reign over the hallways and classrooms of this once peaceful place of learning. 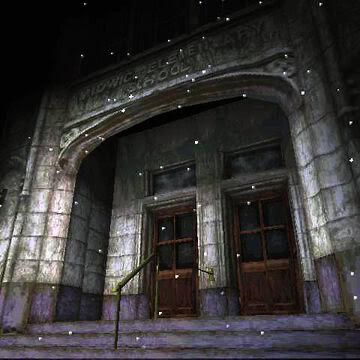 Silent Hill was met with critical and commercial success when it released back in 1999, introducing players to a world of more pure cerebral horror, relying less on the jump scares and pure instinct terror of the Resident Evil series and leaning more into the surreal horror of movie gems like Jacob’s Ladder or Hellraiser. The series would go on to create many more memorable entries and harrowing sequences and sections that eventually followed on future generations. However, everyone will still remember the first time you heard that unnerving siren wailing in the distance, warning you of some sinister ongoings that are about to take place. Silent Hill is a classic of the genre that is begging for a modern day remake ala Resident Evil 2 & 3. Chills all around for this mindfuck of a franchise.