I was introduced to Frank Meeink one Sunday morning on a livestreamed church service (see below if interested). I learned a bit of his story, but it didn’t prepare me for reading the in depth assessment and look into his life entitled Autobiography of a Recovering Skinhead: The Story of Frank Meeink.

Frankie was born to an interesting duo, a full blooded Italian dad and a full blooded Irish mom, both of whom ended up caring more about drugs and booze during the bulk of his life than they did him. Eventually, through his cousin and his cousin’s friends, he became indoctrinated in the rhetoric of Christian Identity, the Reich, and the Klan. As a white supremacist, Frank built a small army in Philadelphia and eventually became infamous throughout the East Coast and Midwest, even doing a stint in Illinois state prison for beating someone nearly to death. 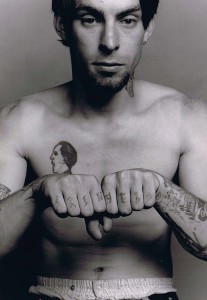 His story is that of movie and legend, in fact many people who knew his story wondered if it was stolen to create much of the basis for the modern Hollywood classic, American History X. But, what jumped out at me was how his addictive personality and his family history actually may have had a big influence on what lead him to be a violent Neo-Nazi. After reading his story, it seems to me that white supremacy was another addiction for Frank Meeink… part of a list that includes heroin, alcohol, marijuana, oxycontin, percosets, and a few I’m sure I’m forgetting.

Frank’s parents were addicts. And in the time during and after his involvement in the Neo-Nazi movement, his alcoholism and other addictions were not only visible, but were in large part what he was known for. Addiction was a huge part of who he was. As a Skinhead, he drank till he was blackout drunk almost every night. After he began to distance himself from the movement, that alcohol was merely used to was down pills, while eventually gave way to “junk”.

The Christian Identity “faith” and the violence that flowed through Frank’s hate speech and hateful actions seemed to be one of his addictions. He was addicted to the hate, the adrenaline, and the whole package that came with being a leader in the Skinhead movement. In fact, when he lost that rush, the alcohol that accompanied it was no longer enough, and Frank became the junkie he swore he’d never be.

Can acts of hate be bred out of addiction? Is hate itself an addiction for some? As those with addictive personalities more likely to become active in movements like the Neo-Nazi movement? In short, what is the connection between addiction and hate groups?

What do you think? Do you believe the cycle of indoctrination into the movement could act somewhat like someone falling into addiction?

Check you this drug rehabilitation center, if you or the member of your family needs some help.