April 5th, 1994 was a Tuesday. I was 18 and a senior at St. Peter Chanel High School in Cleveland, Ohio. It was a normal Tuesday as I remember it, I went to school, hated being there and went home. Little did I know that my world was about to be rocked three days later. 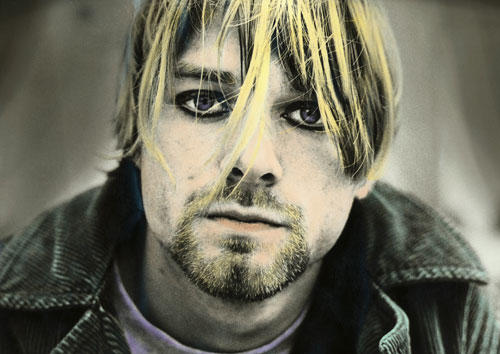 That Friday, April 8th, 1994, I was back at school and was sitting in lunch when a friend of mine in tears came up to me. She was distraught and looked like she’d seen a ghost. Her eyes looked up at me and she said “Kurt Cobain is dead. He killed himself… What the fuck!?” I was in shocked, sickened, and most of all wanting to confirm this story. A week earlier there had been a rumor that he had died of an OD while in Rome that turned out to be false. The writing was on the all however as he had an incident in Rome and was seemingly falling apart before the worlds eyes. So I got home ran to the TV and there it was. That house, I’ll never forget it, it looked like something out of a Grimm Fairy Tale to me. It was just surreal to see the footage and hearing Kurt Loder on MTV reporting that, in fact, Nirvana front man Kurt Cobain had died from a self inflicted gun shot. I cried, I felt my stomach sink. I looked back at my mother who was also watching and she had tears in her eyes. I remember hearing her say “I wish someone had helped that young man.” It wrecked my world, I was a fan for sure but it was bigger than that to many of us in our generation.

To many the death of Cobain became a reason to make fun of drug addicts and kids like me who listened to “freak music”. In the 1990’s as a teenager the music scene was drastically changing but pop still over all ruled the scene. There also was a guy by the name of Garth Brooks that had taken the world by storm. Most kids were not huge into grunge, indie rock, or punk rock at that time. It was mostly Boyz II Men and Ace Of Base. Nirvana had represented a push for genuine music that was not the polished pop garbage that was frequently on the radio. In 1990, I was 15 years old and was listening to weirder music already but hadn’t really found anything I loved outside of Hip Hop. My favorite stuff at that time was definitely Public Enemy and I had discovered some punk/hardcore bands the previous year. I was already interested in playing loud music, jamming with friends, and starting terrible bands. So I entered high school with a musical chip on my shoulder due to the amount of preppy kids that flooded our hallways.

I took a lot of art classes in school so in my freshman year I met a dude who was a older. He was a weird guy, into weird music, and was often trying to weird me out. He was pale like a vampire with black fingernails and a sinister grin. His hair was black as coal and long as our dress code allowed. He was funny and loved to weird out the “straight” kids with his bullshit evil persona. We became friends but musically we were not on the same page as I hated metal, still do for the most part, and he hated the new alternative scene that was starting to blossom in the underground. He came up to me one day and handed me a tape. He said I would like it because it wasn’t metal but it wasn’t shitty rock. I took it home and listened to it. It blew me away. The tape was Bleach by Nirvana and I was obsessed. I asked him if they had more records and he said just this one that he knew of. The next Fall in October of 1991, I would go see them for the first time at the Empire Theater. It would be one of my greatest memories. Then Nevermind would come out and make them the biggest band in the world, but the first couple years I knew of them were special. I was in on something that not many 15-16 year old knew about. By 1993, they were bigger than life and in the Fall of that year, shortly after my 18th birthday, I saw them play one last time. They played a show at the University of Akron on Halloween night dressed in costume. Kurt played the set dressed as Barney The Dinosaur. It was an amazing evening, but it would be the last time I ever saw them play. 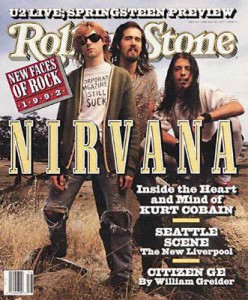 After Kurt’s death there was so much bullshit swirling around. There were conspiracies about Courtney Love’s involvement, people hating on Cobain, and just a lot of sadness. People older and younger than me didn’t seem to be fazed as much as kids my age were. Nirvana was the soundtrack to our teens, along with Pearl Jam, Soundgarden, Mudhoney, and so on. The band wasn’t just a band to us. Their songs represented our experiences as friends, as lonely teenagers looking for a voice and it helped us vent our anger and frustration at the world. Kurt Cobain was our rock star. A shy, artist who just wanted to play his songs. He wasn’t Steve Tyler or fucking Brian Adams. No, Cobain was one of us. He knew punk rock and never seemed to give a shit about the fame part of his music. It is safe to say Nirvana was the biggest band most of us “freaks” listened to, everything else was pretty much underground. The fact is the success of Nevermind and Pearl Jam’s Ten opened the flood gates for so many bands in the early 90’s. I mean all of a sudden our music was everywhere and much more assessable. Bands like Rage Against The Machine came out, then Smashing Pumpkins, then Alice In Chains, and so on. Lolapallooza had begun to really pick up steam as this new alternative music genre blew up. Even radio stations began to change formats to accommodate the new music.

So I sat there on my couch a few days later listening to Courtney Love reading Kurt’s suicide note. It was heart breaking and also hit close to home as a teen who had seen kids die of overdoses and suicide already. We were living in a hopeless era it seemed. Heroin was popular amongst the 16-25 year old crowd that we knew. The artsy folks were always in something and just had little hope for anything. It was a very depressing time for everyone in general. I was a miserable kid, just looking for anything to inspire me. I was heavy into art, music, and writing. I even tried to be an athlete, but the culture of athletics never fit me-so while I was talented I never tried hard and would quit or become ineligible. I was angry at the world around me for some reason, probably because I was 18. Kurt’s death just made me more angry. I was so pissed off that he had taken his own life but I also understood it. I knew he was in pain and I knew he was not happy. Cobain was not shy about those kinds of things. I was in my own pain and had thoughts similar to his. I was looking at a world that seemingly didn’t want me in it and I saw no future, as I wasn’t even sure I would be graduating. I was a very troubled teen.

Once the shock wore off everyone went back to regular life. Things changed for our friends even. Some stayed involved in the music scene, many drifted out of it. I went further inside myself eventually just disappearing on my friends, reappearing at times but overall I was always looking to move on. Cobain’s death wasn’t why I hated where I lived, or why I wanted to move on. It was however a metaphor for the way I felt about life, society, class systems, and so on. I was defeated. Luckily I found a purpose and a calling to make the world better through serving others and teaching people. My Generation X hopelessness faded slightly into a place of anger that drive me to fight for people. I was tired of losing battles and seeing good people die. Music was changing but so was I. In the end I am thankful I got my shit together but I am also thankful for Nirvana and for Kurt Cobain. If it weren’t for them I may have faded into the obscurity of pop music and preppy fashion. I may have never stuck with guitar or kept writing sad songs about being alone.

April 5th, 1994, was 20 years ago but to me it is like yesterday. It is a day that will forever haunt me but also remind me that I have so much left to give. It makes me sad that Kurt Cobain never saw how much he was loved or emulated since his death. His suicide is tragic not just because he was a famous rock star but because he was a person with a lot of love to give. He had a beautiful daughter who grew up with the ghost of her daddy everywhere but missed out on him being there for her. He missed seeing so many crazy things happen in the world and in music. This year Nirvana will be inducted into the Rock n Roll Hall Of Fame. Krist Novelselic and Dave Grohl will be able to accept that award but it will be bitter sweet. Who knows what might have become of Nirvana if Cobain had lived? Maybe they still would have quit after that last tour and maybe Grohl would have still went on to form Foo Fighters and become the awesome ambassador of Rock that he is now? I can’t say but I do know that whether you love or hate Nirvana, they changed everything in music and for a generation of kids like me… they represented us well. So on the 20th anniversary of Cobain’s death I remember the life that he gave to many through his music not the life he stole in a desperate act. May we always remember to get help when we need it and to help those around us who are in pain.