A friend of mine (who happened to be dating the artist you are about to experience) posted a song a few weeks ago. It was fun, simple, and piqued my interest. It was only after probing that I discovered Dally Eek was my friend’s boyfriend and it was then that I decided I wanted to spotlight Dally Eek’s music. 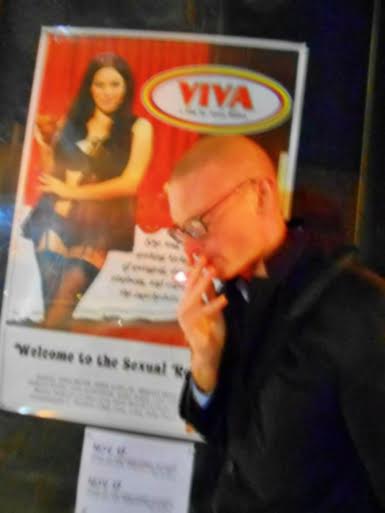 So, without further ado, here’s The Farsighted’s first chat with Dally Eek. We’ll surely be chatting again, so feel free to send questions.

So, Dally, tell The Farsighted readers a little bit about yourself.

Well, I was born in Birmingham, England, and I’ve shacked up with my boyfriend in the East Bay of San Francisco in a room overcrowded with books and boxes of zine-making material. Very glamorous, I assure you. And somewhere among that city of belongings, when I can find it, I have a guitar. I do like to write songs, songs about whatever I please. It’s all still quite new to me. But I love it dearly, and there isn’t anything else I’d rather be doing. My fate is sealed.

What are some of your influences?

If somebody is making music, it’s going to rather dull if you’re only inspired by other musicians, other music. Shopping at the 99 Cents store can be just as inspiring as any record. But saying that, someone once told me, ‘I can’t be friends with somebody who doesn’t like Daniel Johnston.’ Those are words to live by, and a good way of culling the people who really shouldn’t be in your life. Well, it is for me anyway. Daniel Johnston writes with so much unvarnished honesty that I couldn’t help but fall in love his music. I don’t sound like Daniel, and nobody could sound like Daniel. Because nobody else is Daniel. And along with Morrissey, he’s the one that influences me daily. Daniel Johnston and Morrissey have got up and sung their lives, and have never pretended to be anybody they’re not, it seems to me. Take me or leave me, and I don’t care if you do, or you don’t, they sing. You can’t change me, and if there’s any changing to do, I’ll do it myself, thanks very much, they sing. I like that. Also, setting aside how truly funny they both are, they’re not afraid to shine a light on the side of their character we’re told to hide because it won’t bring us friends, or money, or success. To do so will show us to be weak, or somebody to be ridiculed. No, I say, it makes them stronger, people to be admired.

You haven’t recorded a full album yet, but have an array of singles and fun tracks. Do you have a favorite song that you’ve written and recorded?

You should see me trying to select which ice-cream I should take home with me. All the dithering. I stand there so long people think I’m an employee, and ask me which is better: Original Moose Tracks or Chocolate Moose Tracks. Of course, I can’t tell them.

Besides music, what are some of your interests?

I just watched Punk Singer, a documentary on Kathleen Hanna, the musician, feminist activist, and punk-zine writer. I’ve always been interested, drawn to, people who have a ‘Fuck You’ attitude, and aren’t afraid to stand up against the discriminating, sexist, bigoted assholes of the world. I like people who push back in the ways that they can, people who make a difference. Kathleen Hanna is one of those people. They’re inspiring. My interests lie in getting involved in some way, any way I can, in making my own stand against what is obviously wrong and loathsome. I’d like to be another voice, another hand pushing back.

Great. So, this site is all about the intersection of art and culture with faith. I am of the believe that one’s spirit and beliefs always find their way into the art they create. Can you tell us a bit about your views on faith, spirituality, and the world?

My family and religion never took to each other. So for me, Sundays were all about lie ins, kicking a soccer ball against a wall, and listening to the The Top 40 on the radio. I remember being bundled off to Sunday School once at a local church, St. Michael’s it was, and I think it had more to do with my mother wanting me out of her hair for few hours. I could be a bit of a bother. I don’t recall much of my experience that day other than it sealing my fondness for graveyards. And I never went back, I also know that much. Obviously the church wanted me out of it’s hair too. I did walk through the graveyard many times afterwards, going here and there. It was a short cut to the shops, to school, where I lived. St. Michael’s has a lovely graveyard; it’s a bit of a looker, the type you might see on the cover of Weird Tales. I like that path, the one around the building. I’ve no need to go inside. Of course, I can be spiritual and not religious, I know that. And as much spirituality as I might have, I’ve picked up from people, and things, and places inside and outside of myself when I wasn’t looking, and I like it that way. Odd pieces of books and music and movies and people and thoughts and ideas sticking to me like notes to myself, invisible to others, but visible to me. Whether any of that leaks into a song I may write, well, I’m not the best judge of that. And if it it’s there it’s there, if it’s not it’s not. I don’t lose any sleep over it.

Thanks! I appreciate that. Ok, back to the music. Besides those you consider influences, who are some of the artists making music today that wow you?

I do like The Kills. They’re this perfect gang of two, and to add another person, take one of them away, well, it wouldn’t be the same. It would be so much very less. Even The Beatles, as fantastic as they were, could have been improved by the addition of Prince, let’s say, if that had been possible. The Kills have mixed a potion that can’t be improved upon.

Awesome. Well, seeing as I plan to talk to you again, I don’t want to burn all my questions just yet. Consider this an introduction to The Farsighted readers. With that in mind, what is one more thing that’s important for you to tell the readers in our first chat?

Go out and buy Daniel Johnston records. Maybe we could be friends.

Thanks for taking the time to talk. Looking forward to talking again soon and checking out the great stuff you are working on! Take care.