He Said, She Said is a new column where Justin and his better half, the lovely Brooke, chat about a movie they watched together, an album they listened to together, a concert they attended together, or really any bit of art or culture they take in together. This inaugural edition features the recently released Blu-ray of Die Fighting. The Blu-ray looked crisp and clean, highlighting not only the good parts, but also the not-so-good. It’s well worth a watch and you can pick one up at Amazon. You can also stream it on Amazon Video and on VUDU. It’s not exactly a good film, but it’s extremely fun and features some of the most amazing fight sequences put to film in decades. Viva la Z-Team!

Let’s jump right into it, Brooke. What did you think about the movie in general?

I thought it was a unique concept, I guess.

What about it struck you as “unique”?

I guess the ending mostly. It has a good twist. It wasn’t a great script, but the story was pretty good and the ending was really interesting. The beginning wasn’t super boring or anything, but they never did much to introduce the characters. We basically just knew they were a fighting team.

Yeah, for some reason the early fight scenes reminded me of Johnny Cage in the Mortal Kombat movie. Something about being a movie fighter, I guess. I’m not really sure.

I can see that, but Fabien definitely didn’t seem nearly as full of himself as Johnny Cage.

True. As far as the rest of the film, I thought the plot was pretty good, despite having a pretty awful script. Maybe awful is unfair, but extremely amateurish for sure. I think it seems obvious that it was one of the first films for the screenwriter, probably the entire crew really. I think the concept for the story could have been flushed out a lot better. They had a good framework, but really never got to develop a strong script from it. 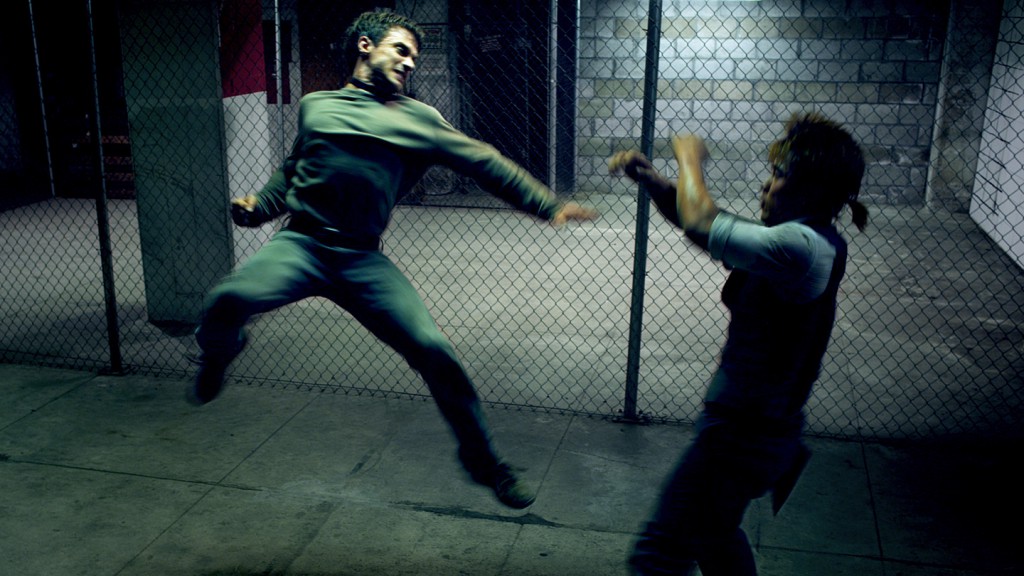 For me the film was all about the action sequences. I thought the fight choreography was incredible.

I agree. The ending was the best part of the story, best part of the script. It was a bit predictable leading up to the reveal, meaning that I knew who that final fight was going to be between; but, the ending wasn’t predictable at all. I think one of the things I liked about the script, or the story at least, was that it felt believable. The games played by “The Director” are dark and twisted, but they feel like they could be real, I mean really people can be really dark and twisted. But it is pretty screwed up, especially considering the ending.

Like I said, the thing I really loved about the movie was the fact that I seriously haven’t seen fighting scenes that good in a while. All of the fights were great, from the hand-to-hand martial arts fights to the gunfights. It was obvious that the Z-Team is well-trained and well-versed in fight choreography and stunts. Their acting skills can surely be honed, but they are ready to be action stars.

The really do look like normal guys. I also really loved how when they did the different fight scenes it was in a variety of places. There was one in a warehouse with a group of thugs. And, the fight in the church with the Steven Seagal looking dude was awesome. I think that was my favorite fight. Which was yours?

I think the final fight is pretty great. I mean, I knew the two would have to end up fighting, but I didn’t know how and I definitely didn’t see the twist that followed.

That was a really great one-on-one fight. I also loved the scene with the underground cage fighters.

Actually, that may be the best fighting scene. The Asian mob boss in that scene was extremely talented. That last scene is probably the most meaning fight, but I don’t think it was the best necessarily. This one is definitely a standout.

Moving forward, I think it would be exciting to see these guys get to do a movie with a bigger budget and a strong screenwriter. Putting their fight choreography in an action film with a strong script could be really excellent.

So, how many stars do you give Die Fighting?

I rated it a 4 on my Letterboxd account. The film was probably like a 2 in many ways, but the fight sequences were a 5+, so I rounded up

Check the film out yourself by grabbing it on Blu via Amazon or through most VOD outlets (as noted above). And stay tuned for our next He Said, She Said where you will get to see inside our heads during our rewatch of the greatest film ever made, Dangerous Men.

One Reply to “He Said, She Said: DIE FIGHTING”