“WOULD YOU KILL A MAN TO KILL A MONSTER?” asks Unearthed Films’s cover of Sheep Skin. It’s not an unreasonable question for a werewolf movie. A man warped once a month by curse and moon to become a murdering machine. Yet the rest of the time, he’s a family man, working hard, not even cognizant of the danger lurking within his very being.

There are multiple interesting places that this train of thought could go. It’s a question that weighs humanity against monstrosity, demanding a value judgement in a context where one of the weights is invaluable.

Unfortunately, Sheep Skin can’t answer this question. It doesn’t even really try. If that was the intention of writer/director Kurtis Spieler, he didn’t do a great job of it. While the man vs monster idea presented by the cover likely came out of a marketing scheme – which is fine, marketing makes the sales world go around – it does set up a narrative that can’t support it.

The movie opens on Todd (Laurence Mullaney), an office grunt on the sexual prowl, despite having a wife and kid at home. He gets kidnapped by the brother of his last extramarital tête-à-tête, who informs Todd that she’s dead and he thinks Todd did it. Todd’s initial desperate responses to the questions quickly give way to incredulous disbelief as it’s revealed that they think he’s a werewolf. 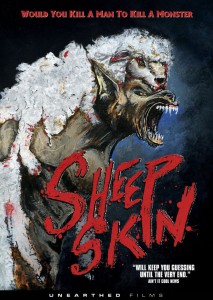 Most of Sheep Skin takes place in a dingy warehouse. Schafer (Michael Schantz) and his ragtag crew combine torture with amateur logic to try and squeeze the truth out of Todd. It’s not hard to imagine Schafer envisioning himself a grandstanding lawyer as he parades himself in front of Todd’s chair. He takes two tenuously linked facts and uses them to make the case for Todd’s guilt. It’s grade school logic, and watching him seriously try to weave a John Grisham-esque case out of thin air is kind of embarrassing. As a viewer, we don’t know if Todd is a werewolf or not, nor whether he’s guilty of killing these people, but we do know that we’re not convinced based off of Schafer’s yelling, arm waving, and gun pointing.

When he’s not doing that, he’s walking away, looking as if it hurts more watching his goon punch Todd in the face than it actually is to get punched in the face. In one scene his girlfriend Dylan (Ria Burns-Wilder) catches him popping pills in the bathroom. It’s supposed to be a moment to add some depth to both characters: Schafer being outed to the audience as a druggie and Dylan as someone whose eyes are set on the future. It’s a moment that could have meant something if it actually built towards the plot, but at no point does “Schafer taking pills” pay off into something more meaningful than “girlfriend has a moment of concern that no one will take them seriously if Schafer is viewed as just a junkie.”

Very little within Sheep Skin’s setup ends up with payoff. It feels like Spieler had an ending, and the rest of the movie is just delaying that ending until he could officially call it a full length film. Cycling through meaningless steps over and over again. A lot of them are different steps, but they’re still just tactics to delay the finale, meaningless to the overarching ideas.

Sheep Skin is a story that has been boiling in Spieler’s mind for a while. He filmed a 10-odd minute short by the same name in 2007. So it was at least a six year journey for him. I can see why he kept at it – there is something really interesting about the general ideas that drive Sheep Skin. A group of friends who is pretty sure they’ve found a werewolf and feel the need to exterminate it? Love it. Combining that with a modern torture porn aesthetic? Love it. The tensions that he was able to rise with the “is Todd a werewolf or not?” question that riffs around the film? Love it. Unfortunately, these loves are nebulous ideas within the actuality of what Sheep Skin is: 60 minutes too long, filled with more stuffing than a Thanksgiving day turkey.