The visceral hatred displayed by my staff at this film makes me laugh. As a parent, I’ve watched so much Disney and Nick garbage that a film that felt pretty decent (mind you, I’ve only watched it once and it was in the theater, perhaps I should leave it that way) was utter garbage to others. I’m not all that interested in watching it again, to be honest.

On the other hand, I’m quite happy I watched it and quite happy we decided to cover it, because… well… read on and you’ll see just how hilariously angry some of The Farsighted crew can get at a film. I saw some merit and morality in this mediocre animated kids flick, but I also saw much of the criticisms you’ll read below to be legit. So, read on… and you can watch it on Netflix… and then let us know your thoughts.

If The Angry Birds Movie left me with any impression at all, it was just how incredibly vacant this movie was.

It was a depressing experience, watching everything unfold with the grim inevitability of death. Watching the pointlessly elaborate, completely unnecessary backstory hit each predictable beat with clockwork precision and numb indifference.

Just who is this movie for? Are there that many people out there who are actually “into” Angry Birds© enough to justify this movie’s existence? I’m not talking about people who find the game fun; I’m talking about people who are invested in it. Does anyone really care about that totally arbitrary story that sets up why the angry birds are launching themselves, kamikaze style, into the green pigs’ haphazard architecture? The pigs steal the eggs. We need a bad guy to clobber. It’s a fun, marvelously simple and addictive game, but it’s not like those angry birds matter to us And from the way things turned out, it’s clear that they didn’t matter to whatever conglomerate cooked this movie up in a lab.

I get it. It’s for kids. It’s family entertainment. This is the formula for success these days. Siphon some cool from the randomly assembled A and B list celebrities©, and throw in some pop culture references for mom and dad. But this movie doesn’t do anything other than expand its own brand. There are no lessons imparted, aside from maybe how to consume content. I’ll be honest. I dozed off for about ten or fifteen minutes in the second act. When I woke up I didn’t feel like I had missed a thing. Even worse, I didn’t care. The movie was on autopilot. And, sorry to spoil it for you, but the film ends with all the characters dancing to a catchy pop song, not unlike almost EVERY OTHER NON-DISNEY/PIXAR 3D ANIMATED FAMILY COMEDY SINCE SHREK. Are there no other ways to end these movies?

Oh wait! I remember now! The red bird had a lot of anger over unresolved feelings about his freakishly thick eyebrows. Glad I learned that. It makes for a much richer gaming experience. 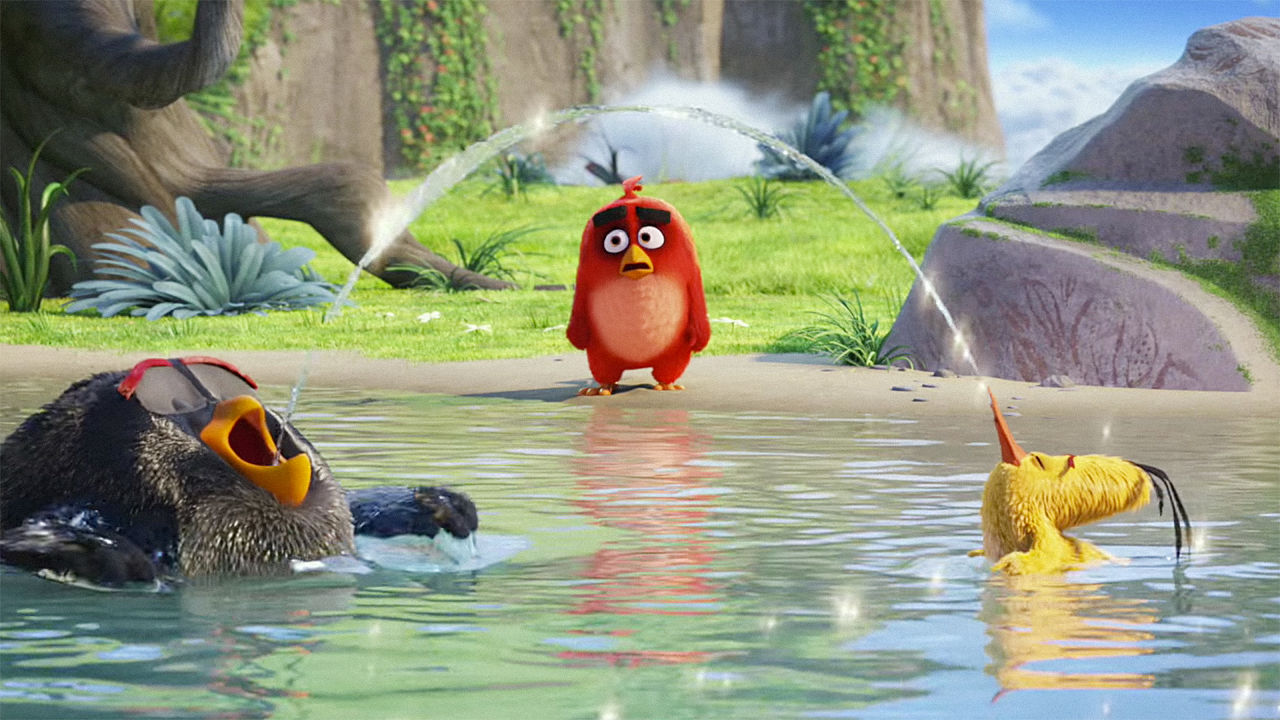 GARRETT SMITH: I was forced to watch this movie for The Farsighted, and now I am angry and my brain has been reduced to the size of a bird’s.

Due to my newfound aggression and suddenly pea-sized brain, incapable of managing such emotions, my notes were lost in a tragic kicking of my computer’s power cord, but this is sort of what they looked like:

A butt joke
Another butt joke
A bird pun
Another butt joke
A pig pun
Slo-mo
Another bird pun
Yet another butt joke
Again with the butt jokes
A fertility joke? Who is this for?
More slo-mo
A Walking Dead reference? Seriously, who is this for?
Butt joke
A John Hamm reference/pig pun hybrid? This is not going to age well
Another fertility joke? Is this a kids movie?
Another goddamn butt joke
More goddamn slo-mo
We’re an hour in and the birds and the pigs have not yet begun to fight, nor have they launched themselves at anything. What is this movie about?
Another butt joke
Another bird pun
Does this movie understand how montages are supposed to work?
Motherfucking butt joke
A sex joke about testicles? With a cutaway to a bird eating nuts? Did the Family Guy writing staff try to write a kids movie?
Fuck me, another butt joke
Seriously, another fertility joke? Who in the fuck is this movie for?
Oh, I see, this movie is about monsters kidnapping and eating children. Lovely premise for a kids movie
FUCK OFF WITH THE GODDAMN BUTT JOKES
Now convinced all the slo-mo is to extend the running time from a cool 80 minutes to a grueling 110 minutes
Did they seriously hire Sean Penn just to grunt into a microphone?
Pun, pun, pun, pun, slo-mo, butt joke, pun
20 minutes to go and we’re just now getting to the actual premise of the game this bullshit is based on
Oh and now they’re just literally explaining how to play an iPhone game
Butt joke 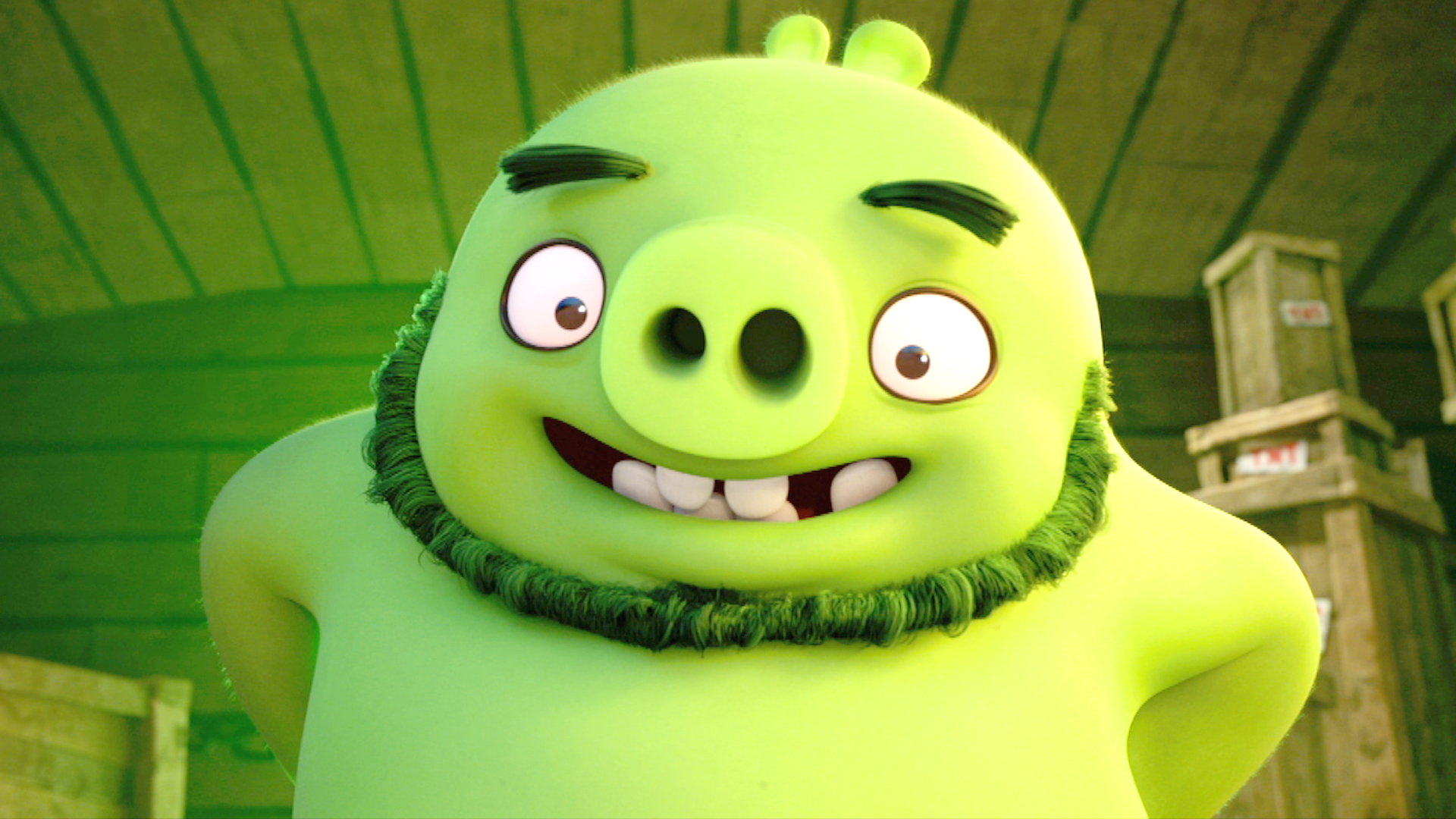 JACOB GEHMAN: A quick Google search tells me that the first Angry Birds game released in December of 2009. What was initially a fun, well-reviewed casual mobile game has since spawn more games (some in the same bird-throwing vein as the original, some not), as well as plush toys, books, t-shirts, and pretty much damn well anything else that can be slogged through the marketing department.

These sorts of fads can be easy come, easy go, so the surprise wasn’t that they decided to do movie (especially as they’d already been producing little mini cartoons released through the apps), but instead that a major studio gave the movie major studio money to do a big budget, theatrical feature animation.

My thumb is not on the pulse of popular culture enough to know how much gas is left in the Angry Birds tank, but The Angry Birds Movie is earnest – a bright-eyed dive into the world of birds vs. pigs that the initial game set up.

Unfortunately, “earnest” is almost always a backhanded compliment. There’s nothing inherently bad in the dictionary definition, but when you use the word “earnest” instead of any number of actual compliments, well, it’s a negative through absence. It’s like when your 4-year-old nephew draws a picture of you in shaky crayon, and you’ve got fangs, and your eyebrows form a black V over your eyes, and devil horns sprouting from your head. It’s earnest. You say, “Good job, buddy!” and then vow to never speak of this again.

The Angry Birds Movie is a hyperactive display of kid-friendly animation. Something is always happening. It’s a potpourri of violently bright colors, exaggerated cookie-cutter personalities, and a black and white morality that will leave some adults uncomfortable.

The latter especially comes into play when you realize that, essentially, The Angry Birds Movie is advocating a bomb-first approach to dealing with conflict. After the pigs show their less-than-friendly hand, there’s no attempt to find a resolution that doesn’t result in leaving the pigs’ city in rubble. Of course, this doesn’t bother everyone–especially in today’s society, the us vs them mentality is prevalent–so maybe this message isn’t going to deter as many parents as my gut reaction would presume. It’s still a weird theme for a children’s movie. Also weird are the blatant, awkward f-word euphemisms. Hearing “____ you” from an animated character in a kids movie took me aback, even without the actual f-word attached. I expect they were trying to throw in some things to entertain the adults in the room, but that really only works when it’s subtle enough the kids don’t notice. “____ you” is noticeable.

Despite their attempts to give adults something to enjoy, this doesn’t provide enough story, characters, or sly humor to differentiate it from any other loud, stupid animated movie. Conversely, it’s not necessarily the most appropriate movie for kids, either, what with the questionable moral and the almost-swears.”