Cecil B. DeMille is a name well known to fans of classic cinema. He directed over fifty films, with the best known being The Ten Commandments and The Greatest Show On Earth. The prestige that comes with those names suggests a proclivity for big epics: big actors, long runtimes. But he got his start in an era of film before sound; most of his films are silent era relics, known only to aficionados of early cinema history.

The Captive was released in 1915, a year with fourteen films to DeMille’s credit. It was certainly his most active year (1914 came close with a respectable eleven), although three of his films from that year have been lost to time. No such thing as cloud storage in 1915, nor any idea that there might be reason to keep track of these things. For a long time The Captive was one of those lost films, an honor it still claims despite having been rediscovered in a Paramount silent film vault in the 1970s.

It’s easy to get snarky (how much do you want to bet that “vault” is a codeword for “we found a dusty box somewhere”), but it’s always nice when something lost has been found, especially when the lost thing has a certain amount of historical significance to it.

All this would be moot if The Captive was awful. Like, imagine losing Battlefield Earth (2000) and the disappointment when that got unearthed in a Warner Bros janitorial closet. “A lost John Travolta film, now rediscovered!” Everyone would be trying to re-lose it.

Anyway, The Captive is a simple story taking place in the Balkan Wars. Sonia (Blanche Sweet), after losing her brother in the war, gets assigned a captured Turkish soldier, Mahmud Hassan (House Peters), to help her with the farm chores. This provides a couple of opportunities for the narration 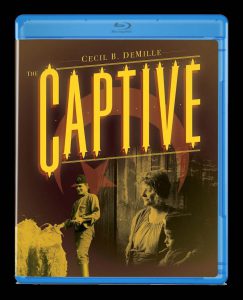 By themselves, neither element is particularly compelling. The romance angle gets amusing if you start to think deeply about it; after all, these are war prisoners specifically being sent to young women. Was it actually their plan to get the enemy fraternizing with them? Win the war through love?

No, what makes The Captive interesting is the deliciously subtle acting. To generalize really quickly: silent film is often over emotive. To make up for the lack of dialogue, actors over exaggerate movement. But here? Not so much. There’s a graceful, casual way that the actors present themselves on screen. Without the cartoony motions, there is a deeper feeling of reality to the characters. The Captive is proof that even silent cinema can convey personality and feeling without a dramatic hand motion to carry it. There is an eye for detail in the way humans interact that just feels right. In one scene Sonia, after telling Mahmud off for dropping a roll before it got in the oven, closes the oven door using her shirt tail to protect her hand from the heat. It’s a little detail most people wouldn’t think twice about, but implies a long-ingrained habit. Earlier in that scene Mahmud, hands gross from working with dough, scratches his nose on his forearm. Again, little, but anyone who has worked with dough, or gotten hands greasy from working on a car, will identify with the moment.

It’s these little details that keep The Captive fresh and exciting through its 50 minute runtime. Even as DeMille was cranking through films at breakneck speed, he cared enough to show us the subtle depth of his characters’ personalities. That goes a long way in keeping a film feeling fresh over 100 years after its release.