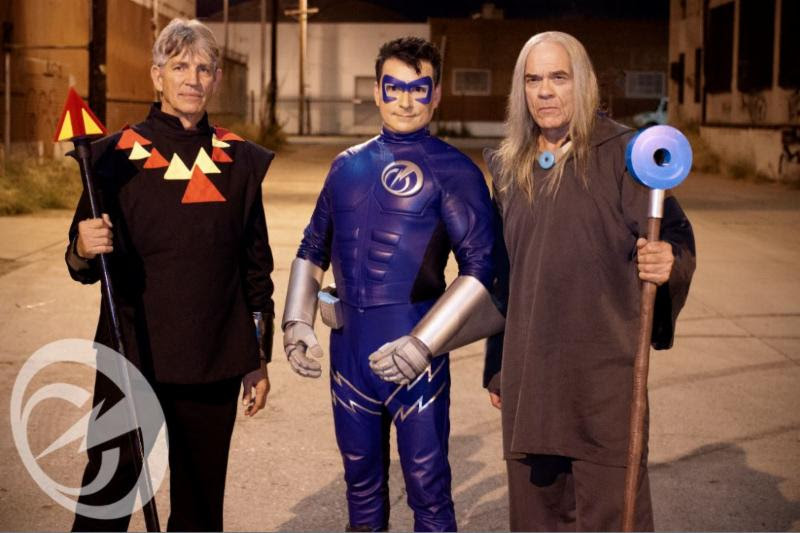 I saw the above picture and raised my hand immediately to volunteer to review this film. Eric Roberts, alone, had me sold. In fact, ever since I began listening to our very own Doug Tilley‘s podcast Eric Roberts is the Man (formerly with a nice F-bomb in the title until the iTunes censors forced him to “get the F out”), I’ve sought out some of Mr. Robert’s weirdo lower budget fare. So this once seemed up my alley:

Surge’s nemesis, the Metal Master, is out of jail and trying to reconcile with his estranged parents (Blair, Gerard) and tempted to continue a life of crime by Augur (Roberts), archnemesis of the wise Omen (Nichols, Picardo). Augur sends Metal Master to Las Vegas for mysterious crystals. Needing more crime fighting help, Surge activates the artificial intelligence in the Surgemobile (Vilanch, Farnon). Augur emerges from the shadows back in Big City, causing Omen to step into the fray, which alerts The Council, a supervillain cabal bent on world domination. Facing more enemies than ever before, Surge must do whatever it takes to save mankind.

I will admit now, however, that I was really unprepared. Make no mistake, Surge of Power: Revenge of the Sequel is not what anyone would call a “good” movie. It’s obviously cheaply made, the script is filled with awkward dialogue, and there are many holes in the plot. But, really… who cares? This movie is a ton of fun.

I watched this one with a glass of beer and a big smile on my face; I recommend you do the same. In fact, I’m pretty sure Mr. Roberts performed most of his scenes with at least a beer or 3 – and a puff or 5 – in his system. But again… who cares? Drunk, high, or just giving a really offbeat performance, Eric Roberts is a ton of fun in this one, as are all of the main players and fun cameos.

The film is open in Los Angeles right now and opens in NYC this weekend. Do yourself a favor and find yourself a place to experience this SURGE OF POWER! Zapuva, indeed.