A girl with a special power living alone in a post-apocalyptic wasteland finds herself hunted down by marauders who want her for their fight pit entertainment while taking care of a child she meets a long the way.

I always smile when I receive a chance to watch and/or review a film from Artsploitation Films because their catalogue has one fine selection of films ever offered to the public with something for everyone’s taste on all forms of platforms to watch then on or own. The film Molly is a welcomed addition to this list in my opinion. 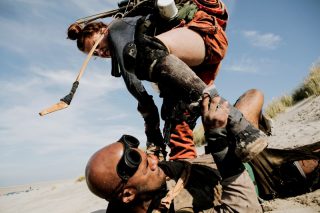 The first thing you will notice is that our heroine is a teenage girl with a set of survival skills that could rival Mad Max’s on any given day plus she has “something extra” that makes her a much desired target of a underground fighting group. Those who are sent to find her soon find out that this is no easy task but once they do and bring her back to the pit, they learn she is not one to be trifled with as she goes on the warpath not only to save herself but the young child she sort of adopts. However the price and toll on her body as she fights off the envoy sent to capture her and anyone else who poses a threat plus always looking for supplies and food to keep up her strength up and alive shows in her face and the heavy breathing on the soundtrack. Also, her “gift” takes a toll out of her as well and could be why she uses conventional weapons more to win her battles.

Molly’s back story and how the world became a wasteland is explored in just the right amount of detail via flashbacks and her nightmares and is easy to piece together while keeping your attention on the present goings on. The fight scenes are gritty and very life like with enemies that are not easily deposed of. Also the pit fighting element is given the proper treatment and not just used to pad the running time. Trust me, all of these threads are weaved together into a impactful film that will take you on a enjoyable roller coaster ride. The last two minutes of the movie will add a final twist and leave it open for a sequel – at least, I am hoping so!