Fiona Apple dropped her new record Fetch the Bolt Cutters on April 18th at the stroke of midnight, much to the delight to fans worldwide. The release is Apple’s 5th studio album, and her first in 8 years. This well worth the wait, as the eccentric artist put together a gorgeous collection of songs. The compositions on this album are wonderfully arranged around Apple’s poetic lyrical genius, giving it a rich full sound. Their is the uniquely Fiona Apple vocals accompanied by piano, percussion, and symphonic elements, even some barking dogs. This is a record that couldn’t have come out at a better time, it’s fresh yet also gives a sense of nostalgic normalcy that resonates with millennials who grew up with Apple’s courageous personal music.

Songs like “Under The Table” and “I Want You To Love Me” take me back to her classic sound, jazzy piano with punchy vocals that seem filled with smokey honesty. “Relay” is a funky percussion heavy track that bounces along whimsically. “Rack of His” is a trippy track which explores dealing with relational turmoil and it’s aftermath. I really love “For Her”, which is an powerful anthem, that is so moving, mixed with multiple vocal tracks on top of each other and the pounding drums, it’s makes my hair stand on end. This is very much a Fiona Apple album, bluesy, sultry, and channeling righteous anger into pulsating rhythmic soundscapes. The albums closing track, “On I Go” comes heavy with a hip-hop-ish vocal rhythm and cadence that is on par with any of her contemporary counterparts. 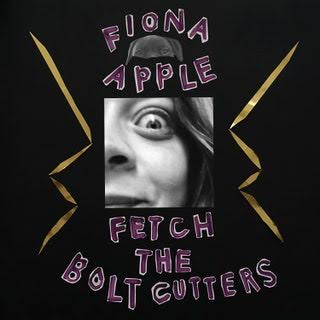 The album is raw, emotional, bliss for my ears, as Apple yells out her heartache, frustrations, and testimony of survival, while boldly taking her claim as the absolute reigning queen of alternative music, if that is even still a thing. In all honesty, this record proves she stands alone and deserves every accolade for continuing to prove it.

Listening to this record I find myself thinking about artists like Lorde or even current sensation Billie Eilish, whom Fiona Apple paved the way, in sound but also attitude. Just as she influenced so many I feel this record conjures up visions of Bjork and Tori Amos, trailblazers in their own right. Apple is and always will be my undisputed champ. However, with such a small catalog and being so mysteriously vacant from the public eye, she has never released a record that had me scratching my head. Instead, she keeps ya waiting for the next masterpiece, and just when we’ve started to move on, we get pummeled by this sexy bluesy voice that has represented the boldness of courageous women for decades, empowering countless to find their own voice. The absolute brilliance of Apple is that she an artist is who has given zero fucks about what the industry thinks, is trending towards or what image is on brand. Fiona Apple, we are undeserving of your talent but grateful for your gift of this album, especially in these dark times.